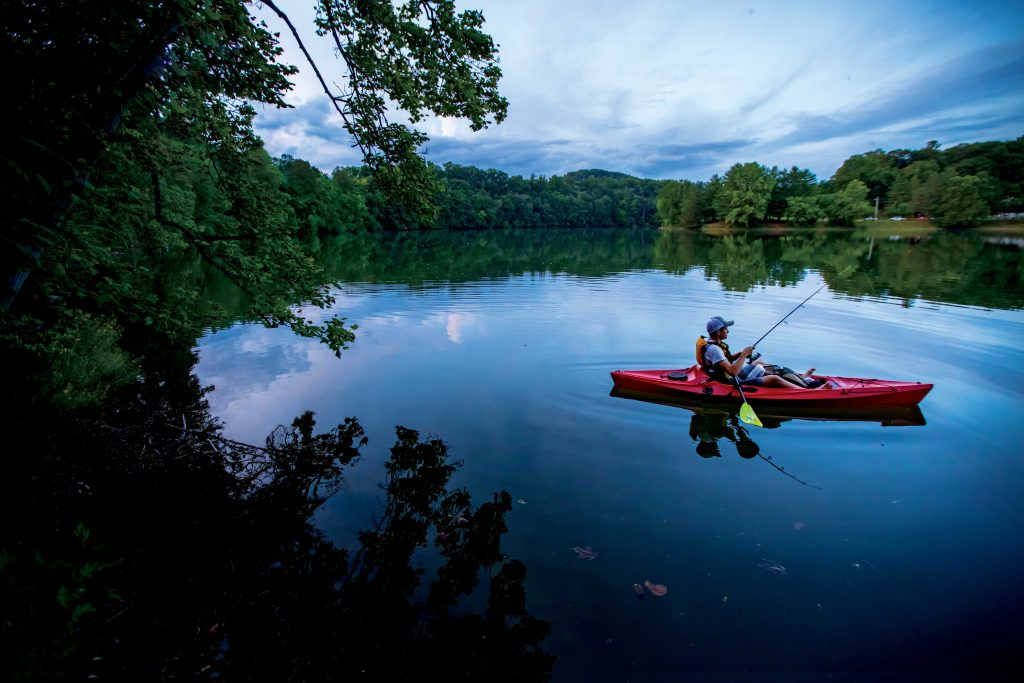 Enjoying the great outdoors in Kingsport is always in season. Recreational opportunities are plentiful and easily accessible, with both the Holston River and a greenway weaving through the heart of the city, more than two dozen neighborhood parks, and scenic mountains all around.

“You can do something outside all year long in our region, and it can be something different almost every day,â€ Kingsport Parks & Recreation Manager Kitty Frazier says.

One of the most popular activities is taking advantage of the Kingsport Greenbelt, a 9-mile long paved trail that averages approximately 10,000 users every month. The Greenbelt connects nearly all aspects of the city, from nature areas to residential neighborhoods to the downtown commercial district.

“The Greenbelt is one of our greatest assets,â€ Frazier says. “It meets almost any need. You can walk on it, run on it, ride a bike, take your children. It’s not a matter of where you’re going on the trail. It’s a matter of where the trail takes you, in terms of the experiences you have that day.”

Water recreation can be found on the Holston River, which flows directly through Kingsport on the way to Knoxville. The river is popular for both boating and fishing, and there are several trails that run alongside it. Frazier says the city is working on creating additional access points to the river.

The Holston River leads to 950-acre Warriors’ Path State Park, which offers opportunities for boating, fishing, hiking and golfing. The park also has a renowned mountain bike trail system that is a designated National Recreational Trail.

“That’s a great park,â€ says Tony Williams, owner of Reedy Creek Bicycles. “There is a lot of good mountain biking there. That’s a big draw for people.”

Cycling in general is a popular pursuit in Kingsport, be it over mountains or along streets and paved trails. Reedy Creek organizes numerous group rides throughout the year, including weekly trips through Bays Mountain Park as well as gravel rides along the Holston River.

With 30 parks in the city system, Kingsport residents don’t have to venture far from home to enjoy the outdoors. Most of the parks either have walking trails or connect to walking trails, and some of them have athletic facilities for baseball, softball and soccer. And for a park of a different type, there is 2,500-seat Hunter Wright Stadium, the home ballpark for the Kingsport Mets minor league baseball team.

“There are just so many things you can do around here.â€ Frazier says. “We have such diverse opportunities, which makes this area very special.”

Kingsport residents take special pride in Bays Mountain Park, a 3,550-acre nature preserve that is the largest city-owned park in Tennessee and one of the 30 largest in the nation. The park opened in 1971, thanks in part to the effort of a citizen-led group that wanted to conserve the area for recreational enjoyment.

“This is certainly the community’s park,â€ says Bays Mountain Manager Rob Cole. “For nearly anybody who has grown up around here in the last 50 years, Bays Mountain was where they first learned to enjoy and appreciate the outdoors. It’s a treasure for us.”

An average of nearly 225,000 visitors frequent Bays Mountain each year, including thousands of regional students. They come to enjoy the park’s 44-acre lake, 38 miles of trails (with 32 miles approved for mountain biking), an Adventure Ropes Course that features a 300-foot zip line, a planetarium, a nature center, and habitats for wolves, white-tailed deer, bobcats, reptiles and more.

The park recently added a pavilion on the edge of the water at Lily Pad Cove. In addition to holding nature programs there, Cole says this picturesque location is ideal for such social events as weddings, birthday parties, anniversaries and prom photos.

“That pavilion is a real asset,â€ Cole says. “It’s just another way for the park to try to serve the community. We’re very proud to be the community’s park, and I can’t see it ever being any other way.”

Kingsport Outdoor Recreation At a Glance

Take a look at just a few highlights of the many aspects of outdoor recreation available to residents of Kingsport.

The city of Kingsport has more than 30 parks and recreation facilities ranging from neighborhood parks with traditional playground equipment to Cattails Golf Course to its brand new Centennial Park with a splash pad feature that’s a big winner with local kids. The department also oversees a 10,000-square-foot concrete skate park and co-sponsors with local businesses an annual Extreme Showdown Skateboard and BMX Competition during Fun Fest. Spring break camps and summer programs are available to young residents, and there are many sports leagues for youth and adults.

The Kingsport Mets, a Minor League Baseball team of the Appalachian League and the Rookie affiliate of the New York Mets, play at the 2,500-capacity Hunter Wright Stadium, located at 800 Granby Road. The facility has a grandstand and reserved seating, picnic spaces and full-service concessions. Speaking of concessions, one of the team’s most popular promotions is Dollar Thursdays, where hot dogs, sodas and beers are $1 each for Thursday home games.

Warriors’ Path State Park, 950-acre park on the shores of Patrick Henry Reservoir on the Holston River is named for the Great Cherokee War and Trading Path. The park continues to be a pathway for outdoors enthusiasts, with premier boating and fishing, 12 miles of hiking trails, a 12.5-mile National Recreational Trail system popular for mountain biking, a nationally recognized golf course and an award-winning nature education program. The park has a marina that is open year round Wednesday through Saturday, where people can rent paddleboards, paddleboats, single and tandem kayaks, and canoes.

The 9-mile Kingsport Greenbelt is a trail that runs from east to west through the city, with historical destinations at each end. On the east end is Exchange Place, which was once a community that was a self-supporting plantation, a relay station along the Old Stage Road and the post office for Eden’s Ridge. There are mile markers here .02 miles, with mileage calculated from east to west, where the trail ends along the banks of the Holston river at the site of the Battle of Kingsport. To access the eastern trailhead, The Exchange Place is located at 4812 Orebank Road.

A popular spot for fishing on the Holston River is Boatyard-Riverfront Park, a 19-acre community park on the north fork of the river. It has two flat fishing piers, one pier with handicap-appropriate railing, and also has accessibility tot he Kingsport Greenbelt. There is renewed interest in creating more amenities for residents to enjoy on the river, and plans are in the works to develop specifics to be included in Riverbend Park, a 24-acre park that will be located along the river adjacent to the Riverbend apartment complex behind the Walmart Supercenter on Fort Henry Drive.