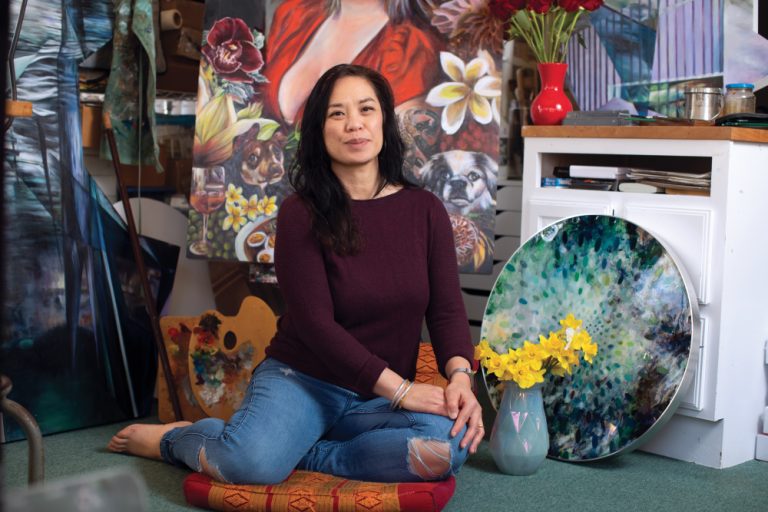 For many artists and musicians, Rutherford County is the blank canvas they are looking for – a place where they can live comfortably, find the resources and support they are looking for and just let their artistic juices flow. And given the area’s thriving arts and culture scene, it’s easy to say that several creatives (both homegrown and relocatees) have made this area their studio.

One artist who calls the county home is Sisavanh Phouthavong-Houghton, a resident of Murfreesboro and a professor of painting at Middle Tennessee State University (MTSU). Phouthavong-Houghton creates gorgeous works of art using mixed media at her home studio, and her pieces are featured in galleries across the state, nation and globe.

“I have been creating art since I can remember,” says Phouthavong- Houghton, whose artwork can be seen online at sisavanhphouthavong.com. “Art has and continues to be a form of therapy from daily life activities.”

As a Lao refugee and postwar-Vietnam-era immigrant, Phouthavong-Houghton explores concepts of identity, memory and notions of home through her artwork. The idea behind each piece dictates the process and result, which can range from paintings, collages, sculpture, video, sound and installation.

“I enjoy mixed-media exploration,” Phouthavong-Houghton says. “It fuels my drive to create.”

That drive to create isn’t limited to her own artwork, however. As an art professor at MTSU, Phouthavong-Houghton constantly shares her talent, experience and insight with others through classes and workshops – even outside of the classroom.

“The Murfreesboro art scene is thriving.”

From local cafes and breweries to shops galore, Rutherford County has something for everyone.

“I had the opportunity to organize watercolor workshops at the Arrington Vineyards and Hop Springs Beer Park,” Phouthavong-Houghton says. “I also had a group show in Murfreesboro for the Art in the Rotunda and Center for the Arts in downtown Murfreesboro.”

Phouthavong-Houghton also cites local libraries, the Rutherford Arts Alliance and the Tennessee Watercolor Society as helpful resources in the area.

“The Murfreesboro art scene is thriving,” she says. “Creatives have access to materials and galleries and museums nearby for research. Murfreesboro has grown quite a bit in the almost 20 years we have been here, but it is still affordable and peaceful.”

Though Nashville holds the title “Music City,” it’s undeniable that musical talent permeates the entire Middle Tennessee area, including Rutherford County, where residents can enjoy a wide range of genres.

One local talent is guitarist John Woerner, who grew up in Smyrna and is part of a trio called QuarterLife. Woerner, along with saxophonist Daniel Backe and drummer Skyler Rippee, combine jazz and lo-fi (or low fidelity, meaning the music highlights things like noise or audio distortions that would usually be filtered out) to create their unique sound.

As a young teen, Woerner took guitar lessons at Concert Productions on the square in Smyrna. He went on to study English at MTSU and enjoyed att ending the annual Murfreesboro JazzFest, which further fueled his love for the genre.

“We love to play in Rutherford County because we feel comfortable and welcome to experiment.”

QuarterLife oft en plays at beloved event venues in the area, including Oaklands Mansion and Sinking Creek Farm, and at local spots like Mayday Brewery and Liquid Smoke, where the audiences are friendly and receptive. But they’ve also found a quieter crowd to play for.

“We are very involved with the nonprofit Music for Seniors,” Woerner says. “We work with them and perform at retirement homes in Middle Tennessee. Residents of that generation definitely respond differently to the music they grew up with and always have a strong, positive reaction.”

Eagleville resident Bill Tollett fulfilled his retirement dream of opening his own restaurant.

No matter the age, residents in Rutherford County tend to appreciate musical talent of all kinds, and their Southern hospitality radiates in a way that performing musicians can feel. “The crowds are always just so open,” Woerner says. “We love to play in Rutherford County because we feel comfortable and welcome to experiment.”

QuarterLife’s latest album came out on March 8 with their friend and fellow MTSU graduate Hank Ehemann, who goes by the name Wishwash. The group also has a residency at Liquid Smoke, where they perform monthly.

Fans can follow the group on social media at @qrtrlyf to stay up to date on their latest releases and performances.