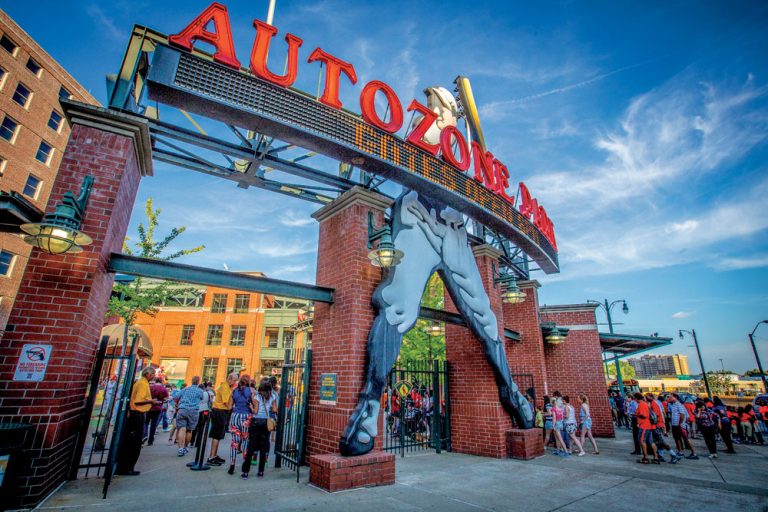 There are so many things to see and do in Greater Memphis, that a person can drift from one activity to another as effortlessly as the sound of blues music floating off Beale Street.

There are museums and galleries. Small clubs and big sporting events. Symphony and opera are a mighty river that never stops rolling. And hovering over it all is the sweet, sweet smell of barbecue and a full menu of fine options.

“If you ask people about their experience in Memphis, the word that always comes up first is fun,â€ says Carol Colleta, president and CEO of the Memphis River Parks Partnership. “Memphis is just a really fun place. People always have a great time here.”

It can be argued that Memphis is the birthplace of rock-n-roll since it is the home of Sun Studio, where Elvis Presley began his legendary career and future luminaries like Johnny Cash and Carl Perkins. And the region’s soul music roots are celebrated at the Stax Museum of American Soul Music, the former location of Stax Records. It is a city steeped in early 20th-century Delta blues. Music can be enjoyed in abundance along boisterous Beale Street, home to more than 30 bars, restaurants and shops within a two-block, visitor-friendly stretch.

But beyond Beale lies a vast array of other cultural attractions. The Memphis Symphony Orchestra and Opera Memphis have both been performing regularly since the 1950s, and Ballet Memphis had been dancing across the scene for more than 30 years. A more recent addition is Crosstown Arts, a contemporary arts center that opened in 2010 in a renovated warehouse.

You could spend an entire day in Memphis without ever leaving Overton Park, a 342-acre greenspace in the heart of the city. Attractions include a 9-hole golf course, two playgrounds, a 126-acre forest, and the century-old Memphis Brooks Museum of Art, the oldest and largest art museum in Tennessee with more than 10,000 pieces in an 86,000-square-foot building.

For sports lovers, the calendar is packed with events. There is NBA action from the Memphis Grizzlies, major college athletics at the University of Memphis, and minor league baseball with the Memphis Redbirds, who play at the delightful AutoZone Park downtown. But perhaps the highlight of the sports year is the FedEx St. Jude Classic PGA Tour golf tournament, which has been held annually since 1958.

Of course, visitors always take time for food while in Memphis, especially when it comes to smoked meat. “I know people who will come to town just to get the barbeque,â€ Colleta says.

Still, there are numerous other options that should not be missed, including Andrew Michael Italian Kitchen. Owners Andrew Ticer and Michael Hudman were named James Beard Award semi-finalists in the Best Chef Southeast category. The two also own The Gray Canary – inside Old Dominick Distillery – as well as Hog & Hominy and Catherine & Mary’s.

All the best of what the city has to offer comes together at the annual Memphis in May Festival, which includes live music, a barbeque cooking contest, and a half-marathon/5K run along the Mississippi River.

Ah yes, the Mighty Mississippi. The most important river in the United States is at its widest and wildest as it flows past Memphis. It has always been a major attraction for the city, and now work is under way to improve the experience through a series of major projects along the downtown Riverfront.

Changes include the construction of a newly designed Mississippi River Park, the creation of a biking/pedestrian trail on the waterfront that will connect to existing trails that extend into the city, and the renovation of popular Tom Lee Park.

“The Mississippi River will always be the heart of Memphis,â€ Colleta says. “The idea is to make connections so people can enjoy it as a seamless set of park experiences along our riverfront. Those connections are going to be critical for people to access the riverfront the way they should be able to. In terms of fun, it’s going to be a fantastic new way to enjoy Memphis.”