A European tradition helps Americans serve up kindness – one cup at a time. 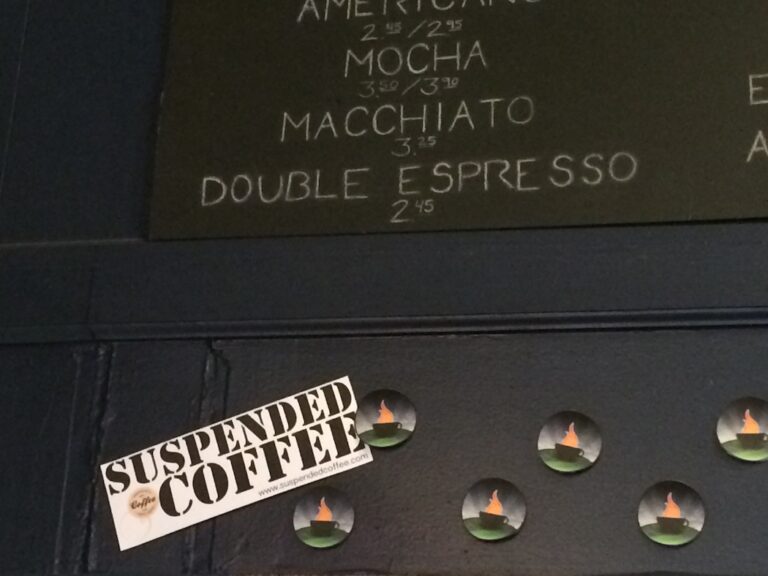 We’ve inherited a lot of great things from the Italians – spaghetti, latte, gelato, the Ferrari. Even the name America has its roots in Italy. The latest gift from ‘Lo Stivale’ is Suspended Coffee, a movement that is gathering steam across the country as a way for coffee lovers to pour out a little kindness for their neighbors.

The concept of suspended coffee originated in coffeehouses in Naples, Italy. When a patron paid his bill, he would often ‘suspend’ a coffee – or pay for an additional cup – which could be claimed later by a less fortunate customer. The idea spread and eventually landed in cafes and coffee shops in the U.S., and in 2013, John Sweeney set up a Suspended Coffees Facebook page to spread the coffee kindness even further. Sweeney’s social media campaign took off, and within a year, more than 1,400 coffee shops had signed on, agreeing to accept and distribute suspended coffee.

Matthew O’Dell’s coffeehouse, Reveille Joe in Murfreesboro, Tenn., is one of those participating shops.

“I joined the military and did some training around the country and around the world, and was able to go see and be part of a lot of different communities. I first came across the suspended coffee movement in a coffeehouse out in Arizona, so when I decided to open my own coffeehouse in 2013, I wanted to add that as part of a staple of Reveille Joe,” O’Dell says. “It’s been an awesome thing for the past year-and-half since we’ve been open. We’ve collected just over $3,000 in suspended items – and not just coffee, but pastries and other food items, too.”

“We get two or three suspended donations a day. I don’t even have to ask them. People come in and say, ‘hey can you add a suspended coffee or a suspended sandwich or anything onto my ticket,’ and it’s been really awesome.”

O’Dell, a military veteran, opened his coffee shop to help Murfreesboro’s veterans and their families. He says suspended coffee is another way to expand that mission.

“A lot of veterans themselves or family members of vets come in and purchase suspended coffee, so it can be given to other vets,” O’Dell says. “It shows the great deal of respect that our community holds for our veterans, and it says a lot about the generosity of this community.”

On the Suspended Coffees website, Sweeney stresses that a suspended coffee can be claimed by anyone regardless of financial need. The movement, he says, gives people a way to invest in their community’s people and businesses.

“With suspended coffee, we can really bless anybody – not just somebody in need,” O’Dell says. “It could be a mother and her kid who walk in, and I can say to her, ‘hey, you know what, somebody already took care of this.’ And we can use the money from suspended coffee as payment. The joy that it brings someone – just out of the blue – when they realize there are people out there who just want to see someone smile.”

O’Dell says that although there are some skeptics and even a very small few who might abuse the system, he’s not deterred.

“You have to have faith in humanity – otherwise you become jaded and closed off to what people really need. And if you close yourself off, that limits the effect you can have on your world,” he says.