The Nashville region boasts a mile-long list of resources for staying active and abundant natural attractions make it easy to enjoy the outdoors. 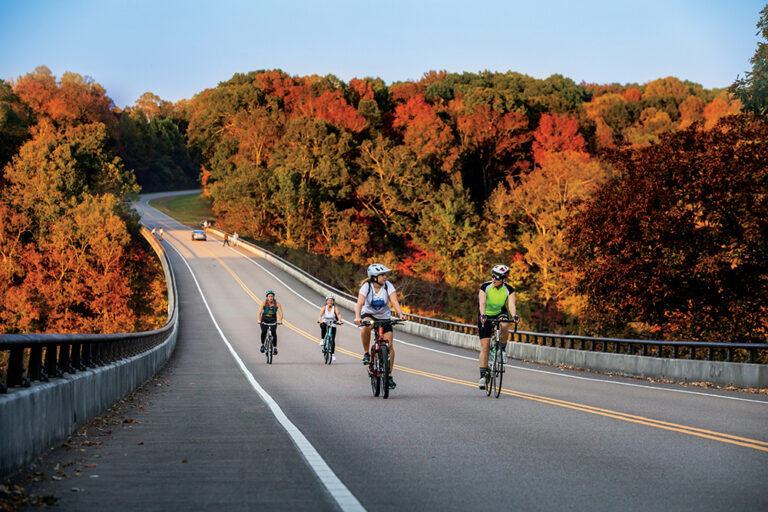 Don’t let this vibrant city fool you. Within 30 minutes of downtown Nashville, you can wander down country roads and overlook miles of green pastures.

Another favorite spot — especially for cyclists — is Natchez Trace Parkway, which extends 444 miles from Nashville to Natchez, Mississippi. The Trace has a maximum speed limit of 50 mph for motorists, and no commercial vehicles are allowed.

The National Park Service (NPS) designates the entire parkway as a bike route, and numerous signs instruct cars to share the road with bicycles. NPS officials say there are no stop signs, stop lights or cross traffic, and motorized traffic is always very light.

Just south of Nashville is The Park at Harlinsdale Farm in Franklin, which features 200 acres of rolling farmland. Amenities at Harlinsdale include a 4-acre dog park, a 3-acre catch-and-release fishing pond, an equestrian trail and a 5K soft turf track for walking or running.

A favorite gathering place in Mt. Juliet is Charlie Daniels Park, with attractions like a walking trail, stream, splash pad and large playground. Murfreesboro is home to a greenway system with 15 miles of trails, bridges and boardwalks. The Cumberland River Bicentennial Trail in Ashland City offers 6.7 miles of hiking and biking trails along the scenic Cumberland River. In Hendersonville, residents have easy access to Old Hickory Lake and its many recreational activities, including boating, fishing and camping.

“Know before you go — do a little research, maybe ask a park ranger about the best trail or opportunity or experience you’re looking for.”

Goodlettsville is home to the 147-acre Moss-Wright Park, which has a walking trail, a dog park, a fitness area and many sports fields. In Thompson’s Station, Sarah Benson Park boasts a playground, a one-mile walking loop and approximately 3 acres of multi-use trails. Other popular outdoor attractions in the Nashville metro area include Lake Forest Park in La Vergne and Honeysuckle Hill Farm’s zip line (open during its Fall Festival) in Springfield.

Hiking is Still No. 1

State parks are near the top of the list when it comes to the most-visited recreation spots in the Nashville region, with nearly a dozen located within two hours of Music City.

They range from the 11-acre Bicentennial Capitol Mall State Park in downtown Nashville to the sprawling 3,500-acre Tims Ford State Park near the Cumberland Plateau.

Padgett says the number of visitors to state parks exploded during COVID-19 when people wanted to get out of their houses.

“Numbers have now returned back to normal but are still higher than our 2019 attendance figures,” he says. “Hiking is still the No. 1 activity for people coming to state parks, followed by boating and fishing. Meanwhile, you can also go golfing at places like Henry Horton, Tims Ford and Fall Creek Falls state parks.”

“A new world-class lodge opened at Fall Creek Falls in January 2022, and a new restaurant/visitors center opened in June 2022 at Henry Horton State Park,” he says. “There is also funding in place to construct new visitor centers at Harpeth River State Park as well as at South Cumberland State Park in Monteagle in the next few years.”

Padgett also wants to make the point that many people overestimate their abilities and underestimate nature while at state parks, so prepare for your visit.

“Know before you go — do a little research, maybe ask a park ranger about the best trail or opportunity or experience you’re looking for,” he says. “Remember that you’re in nature with wild spaces, and you can get yourself into trouble if you don’t know your abilities. Take enough water to hydrate, and don’t be one of those people who wears flip-flops on a 5-mile hike. That’s not a good idea.”