Affordability, a welcoming atmosphere and a cosmopolitan culture are just a few of the factors drawing newcomers to Nashville. 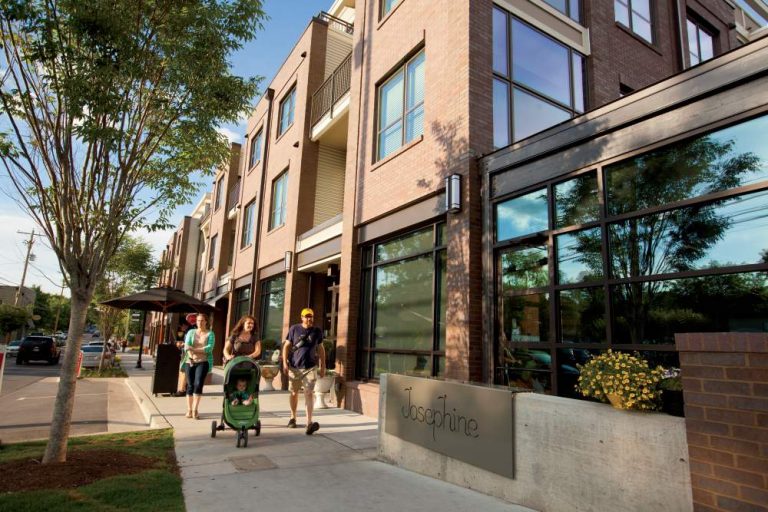 After graduating from the University of Mississippi, Dena Nance could have moved to New York or Los Angeles to start her wholesale fashion business, What’s-In-Store, but she chose Nashville.

“I’m a country girl at heart, and I’ve found a city that blends my values and upbringing with my goals very well,” Nance says.

Now the owner of a nationally known wholesale and online retail business, Nance credits much of her inspiration and success to Nashville’s influence.

“The cosmopolitan style of the city and its Southern flair has influenced my jewelry designs, and they’ve sold worldwide,” she says.

Nance is part of a growing group of young professionals who are finding Nashville to be the perfect home and launching pad for their careers. Since 2007, the metro’s young adult population has grown by 13 percent, putting it among the top 10 most popular cities for Millennials, according to MSN Real Estate. Sixty percent of graduates who attend colleges and universities in the area stay in the region – and it’s easy to understand why.

“There are many reasons for that: varied industry, education, plenty of things to do culturally, and of course, a cost of living at 89 percent of the national average, which makes it affordable to stay,” says Alex Hughes, manager of talent retention and the YP Nashville initiative for the Nashville Area Chamber of Commerce.

A survey of young professionals across the region emphasized the appeal of Nashville’s diverse neighborhoods, Hughes says. Other quality of life factors keeping graduates in the area include Nashville’s abundant job opportunities, friendliness, central location, seasonal climate and community-service opportunities.

In Nashville, young adults have “access to mentors within chosen fields,” Hughes says. The atmosphere cultivated by local businesses creates learning partnerships between established professionals and their younger colleagues. The positive climate also encourages businesses to work together for growth. “There’s a vibrancy and energy you don’t always find elsewhere,” Hughes says.

Nashville’s creative community – home to musicians, artists, writers and innovators across a range of fields – fuels its vibrant culture, says Ralph Schulz, president and CEO of the Nashville Area Chamber.

“We have historically benefited from our music and arts scene,” he says. “Our city’s arts participation rate is nearly five times the national average.”

Art lovers can attend monthly Art Crawl events in downtown Nashville and Franklin or browse roving exhibits at the Frist Center for the Visual Arts and Cheekwood Botanical Garden and Museum. For those who enjoy a night at the opera, theater or ballet, the Tennessee Performing Arts Center offers a full lineup of entertainment. Foodies can indulge in fine dining and an inventive culinary scene spreading across the area. And pro-sports fans can enjoy their share of action, from NFL Tennessee Titans football games to NHL Nashville Predators hockey matches.

Nashville is best known for its world-class music scene that features artists of all genres. Live music venues, from local landmarks like the Ryman, The Grand Ole Opry House and the Nashville Municipal Auditorium to more intimate settings like the Mercy Lounge, The Basement and The Bluebird Cafe, bring thousands of concerts and shows to the city each year.

Nashville is also characterized by its progressive view of city development – and several new projects are drawing traffic downtown. Already bringing in thousands of visitors for conventions, the new Music City Center (MCC) is exposing more people to Nashville and its appeal. So are new hotels like the Omni Nashville Hotel and Hyatt Place Nashville, both located near the MCC. Surrounding the MCC are other popular venues like the Schermerhorn Symphony Center, the Bridgestone Arena and Country Music Hall of Fame and Museum – all of which host star-studded events, concerts and showcases regularly.

Nashville’s housing market continues to grow, ranking among the top 10 markets in the nation. Neighborhoods in areas such as SoBro (south of Broadway), the Gulch, Germantown, 12South and East Nashville are expanding, and a new pedestrian bridge connecting SoBro to the Gulch is expected to make downtown living more convenient. Construction of a $7.1 million, 32-story SoBro tower with more than 300 apartments is under way for urban dwellers, while increased development of single-family homes and condos in outlying neighborhoods caters to a more commuter-focused crowd.

Development is also refreshing older sites throughout the city. The new Global Mall at the Crossings provides an outlet for internationally themed retail shops in what was once a shuttered mall in the Antioch area. And a public-private partnership is funding a new recreation center and ice rink next door. Plans are also in the works to build a new stadium for the Nashville Sounds Triple-A baseball team at the site of the historic Sulphur Dell ballpark.

With more than 1,000 events scheduled year-round throughout the city and its surrounding areas, Nashville residents never have a shortage of things to do.

“In 2013, we had more than 900 events listed for downtown alone and could have had many more if we listed every event happening daily at locations like the Frist Center and the library,” says Andrea Champion, communications director of the Downtown Nashville Partnership.