"I felt lonely and stuck in a place that felt nothing like home. A wiggly, ill-behaved beagle changed everything." 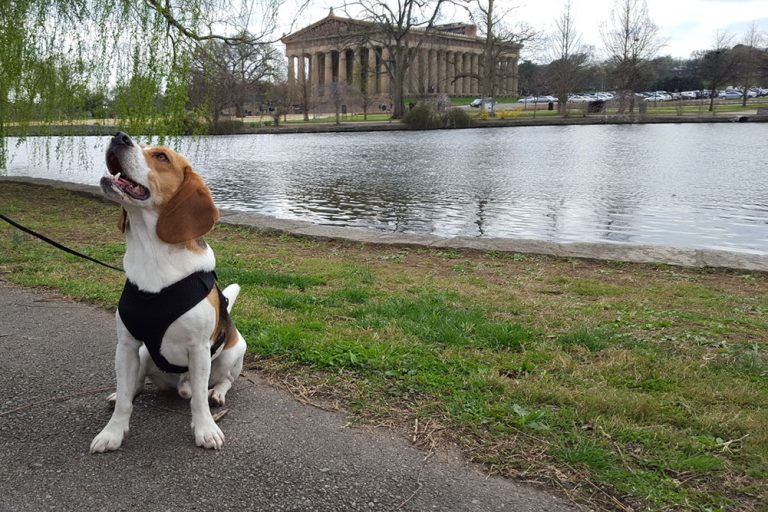 The plan was to move from Seattle to Nashville and stay for a year, maybe two.

As a lifelong Pacific Northwesterner, I romanticized the opportunity to hit restart somewhere new and my husband Robby, a Nashville native, looked forward to being closer to old friends and family. We softened the commitment by telling ourselves we could always move back the minute the adventure stopped being fun. Seattle would still be there; my home would always be there.

But life had other plans.

Within six months of landing in Tennessee, familial circumstances anchored us to our new city whether we liked it or not. What started as a temporary sojourn quickly soured into an inescapable obligation.

Worse, moving to Nashville wasn’t nearly as glamorous as I thought it would be. I gave it a shot! I really did. But the attractions I loved to visit while on vacation quickly grew stale, and I vastly underestimated how hard it would be to make friends, find a job and establish a life in a new place that felt like mine.

One of the toughest adjustments for me was that in Seattle, I could walk almost everywhere – to work, to my favorite coffeeshops, restaurants and record stores – and I’d often bump into familiar faces along the way. In such a dense city space is tight, but it didn’t matter that our one-bedroom apartment was small because the building was just a few blocks away from the Space Needle, multiple rock clubs, an independent movie theater and the best grocery store in the entire city. (I love you forever, Metropolitan Market.)

Our life in Nashville, though, was the opposite. Nashville is vast, and doesn’t have a great public transit system. The city is laid out in a confusing spoke-and-wheel-shaped tangle of highways and freeways that can be tough to navigate for a newcomer. Pockets of dense neighborhoods and small businesses do exist, but they’re scattered around the city in places that are hard to access easily by foot or bike. We had to buy a car to make our life work here.

I fought the transition longer than I should have. Because I missed Seattle – the places, the people, the crisp salty air – every hour of every day, I tried desperately to shoehorn Nashville into something familiar. When that didn’t work – because of course it didn’t work – I complained, I whined, I cursed my luck, the city and my husband. (Sorry, husband.)

But everything changed the summer we got a dog.

I don’t remember when our conversations about dog ownership shifted from being a fun daydream to us strolling the grounds of the Nashville Humane Association “just to look,â€ but one July day a very wiggly and energetic beagle decided he was ours. We named him Johnny Waffles.

Honestly, the first few weeks were rough. Johnny had a terrible case of kennel cough and then he got worms. And though the vet estimated he was about a year old, he still acted very much like a puppy. He laid claim to his new home by peeing on the floor and chewing up anything within reach – three shoes, two pairs of eyeglasses, one remote control, my favorite and irreplaceable hooded sweatshirt and countless books. Man, did that dog destroy a lot of books.

He refused to poop in his own yard and instead demanded a walk around his new neighborhood every morning and night. And if he got bored or hungry – which was often – he’d jump into our laps and aggressively lick our faces until we got the hint. It’s a very cute trick! But less so when it happens just minutes after seeing him gnaw on an unidentifiable clump of something-or-other in the yard.

In an effort to keep Johnny from getting bored on the weekends, the three of us started to explore the city together. We went to dog parks we never knew existed and strolled along some of the local greenways we never made the time to visit before. Johnny chased every squirrel in Centennial Park and barked wildly at unflinching deer in Shelby Bottoms. He peed on every lamppost in downtown Nashville and tried to gobble up every bit of dropped food on Broadway.

Johnny also forced us to break free from our uninspiring and stagnant routine – we opted for new spots that offered dog-friendly patios. He’d sniff at the other pups while we’d chat with the humans, total strangers just minutes prior, about our pets’ hilarious habits.

Within a couple months, the once expansive and overwhelming Nashville started to feel smaller. Cozy even. Through him, we experience new pockets of the city we never would have otherwise.

Our suburban neighborhood – the neighborhood I begrudgingly existed in for two years – started to look different, too. Thanks to those twice-a-day walks with Johnny we now know our neighbors, and their pets, better than we ever did in Seattle. Kids yell out to him by name when they ride by on their bikes, some of them stop and ask if they can exchange a Goldfish cracker for one of his many tricks.

He is the king of his neighborhood, Nashville is his home. And now, thanks to the goodest of boys, it’s finally mine, too.