Learn how the Tennessee Main Street Program and its Tennessee Downtowns initiative are helping downtowns across the state preserve their historic structures, create new attractions and draw more visitors. 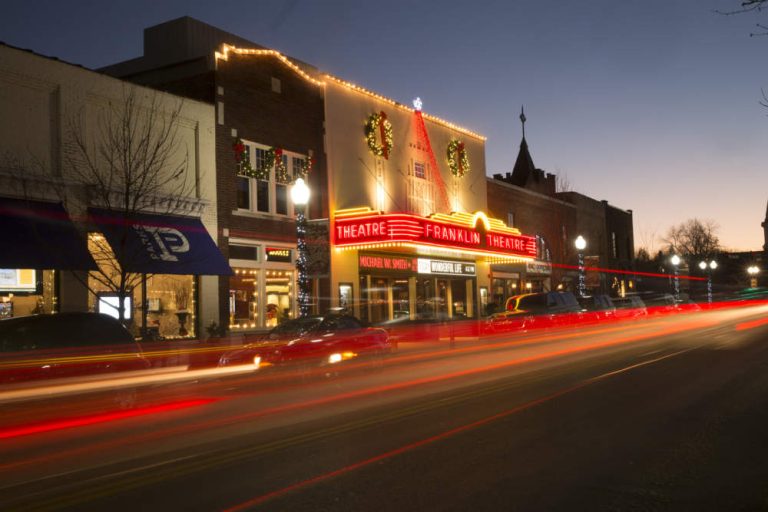 Although larger cities – like Nashville, Memphis and Chattanooga – are well-known for their flourishing business and entertainment districts, smaller communities across Tennessee are also investing in their downtowns, often with help from the state.

As a result, a variety of suburban and rural communities are creating new opportunities for unique retail, restaurants, offices and living spaces and adding to the state’s strong appeal and high quality of life.

Located about 15 minutes outside of Nashville, downtown Franklin is home to a 16-block district that is listed on the National Register of Historic Places. The Downtown Franklin Association (DFA), a nonprofit organization that was founded when the city joined the Tennessee Main Street Program in 1984, has worked to revitalize the district by following a four-point program established by the National Main Street Center (NMSC).

The program emphasizes organization, promotion, design and economic vitality, and it is one reason why Franklin has received so many accolades in recent years. For example, the city’s downtown district helped it land the No. 8 spot on Travel + Leisure’s list of America’s Favorite Towns in 2013.

Kristy Williams, Franklin’s Main Street Program director, says the community’s biggest restoration project took place between 2007 and 2011, with the restoration of the historic Franklin Theatre. The $8 million renovation was led by the Heritage Foundation of Franklin and Williamson County, a nonprofit preservation organization established in 1967 that comprises the DFA. It was the county’s first LEED-certified historic restoration project.

“The community came together and said they wanted to keep our Franklin Theatre,” Williams says. “No one wanted it to turn into office spaces, and now it’s a booming arts destination with live entertainment, movies and special events.”

Bristol is part of the Tennessee Main Street Program, too, and the nonprofit Believe in Bristol organization has also used the NMSC’s four-point approach to bolster downtown growth and prosperity.

Because the community’s Main Street is located on the Tennessee-Virginia state line, both Bristol cities have partnered with BIB, resulting in a thriving downtown with an arts and entertainment district that’s home to the restored Paramount Center for the Performing Arts, Theatre Bristol and Bristol Ballet. In addition, downtown Bristol includes public art installations, restaurants, pubs, art galleries, museums and boutiques, and hosts family-friendly events throughout the year.

Tennessee Downtowns, which is affiliated with the Tennessee Main Street Program, was created in 2010. A group of communities is selected each year to participate in the community improvement and downtown revitalization program based on their historic commercial resources, economic and physical need, demonstrated local effort, overall presentation and probability of success. Volunteers from the chosen communities form committees that participate in two-year programs supported by the NMSC, and they are eligible to receive a $15,000 grant after completing training based on the NMSC’s four-point approach.

Jefferson City was chosen for Tennessee Downtowns during the program’s first year, and the city’s downtown – the Mossy Creek Historic District – has seen several revitalization projects since its team of volunteers, the Mossy Creek Foundation, came together in 2010.

The foundation is currently working with Jefferson City to construct Festival Park in the Mossy Creek Historic District, which will turn Main Street’s vacant lots into a place for community events and family gatherings complete with a hillside amphitheater, pavilion, playground and veterans’ memorial.

Paris, Tenn., was also one of the 10 communities selected to participate in Tennessee Downtowns during the program’s inaugural year, and its downtown area has been reaping the rewards ever since.

The Downtown Paris Association (DPA) currently puts on dozens of events each year, and for the past two years, a Paris partnership called Back Alley Paris has received the Arts Building Community grant from the Tennessee Arts Commission. The partnership, comprising the DPA, City of Paris and Lee Academy of Arts, aims to beautify downtown Paris’ alleyways by hiring local artists to paint scenes that depict life during the early 1900s and various community landmarks.

“Our downtown is alive and vibrant,” says Kathy Ray, DPA’s executive director. “We call it the heartbeat of our community; there’s something going on all the time.”