Rebels without a cause? More like tourists who shop local. Cities and towns are starting to cater to bikers — and seeing a big payoff. 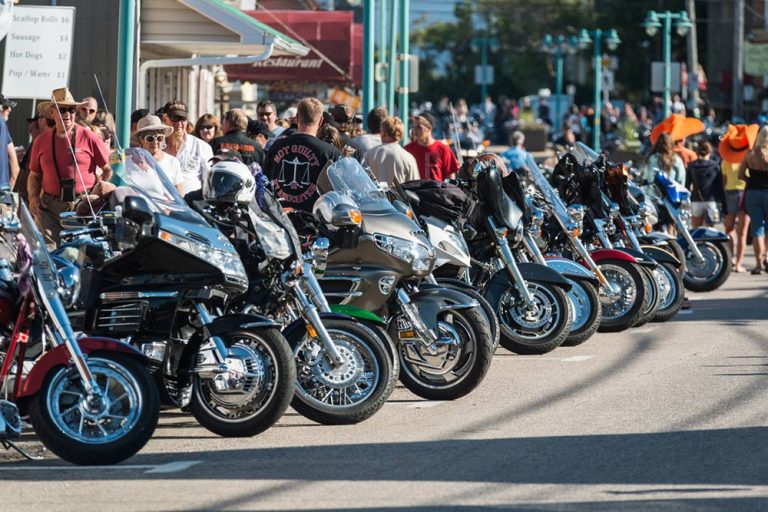 In the 1953 movie “The Wild One,” The Black Rebels Motorcycle Club rumbles menacingly into town, fully clad in leather and attitude. The gang’s leader, played by Marlon Brando, is asked what he is rebelling against? Brando replies, “Whadda you got?”

For decades, this was the general stereotype most people had of motorcyclists. It was a subculture filled with renegades and outlaws, embracing a born-to-be-wild lifestyle as they traveled well outside the norms of polite society. They were to be avoided, not welcomed. Or so the conventional thinking went.

At long last, it appears those old notions are starting to change.

“The mainstream rider is not what people think they are anymore,” says Terri Collier, a former bank vice president in Oklahoma and longtime motorcycle enthusiast who publishes Thunder Roads Magazine of Oklahoma/Arkansas. “The average reader of my magazine makes $75,000 to $100,000 per year. We have disposable income. And we don’t travel in packs of one. We travel in packs of 10 to 20.”

These days, many people who embrace motorcycle culture also have professional careers. Weekday bankers become weekend bikers. They get their motor running and then their charge card humming, as they have both fuel and money to burn.

Several cities have discovered the value in catering to motorcyclists and have started tourism campaigns to attract more riders to their region. Muskogee, Okla., created a Motorcycle Ride Guide brochure touting the area’s “asphalt rollercoasters,” a series of five highway routes totaling 700 miles that meander throughout the eastern part of the state.

Harrison, Ark., offers a similar guide detailing the twists and turns that await motorcyclists in the Ozark Mountains. Fayetteville, Ark., and Roanoke, Va., are among the cities that hold annual biker rallies.

These towns have begun making extra efforts to attract motorcyclists as it has become increasingly evident that many riders are also ideal tourists. They are looking for places to go and things to do, and they are spending money along the way.

Some local businesses now have window stickers promoting themselves as being “biker friendly.” This can include anything from special parking areas designated for motorcycles to shipping discounts for bikers who purchase merchandise they are unable to carry home.

“We no longer want to just jump on our bike and ride. We want to find places we can go,” Collier says. “We want to see museums, art festivals, concerts. So when we come into your town, we’re not just riding our motorcycle through. We’re staying the night, and we’re going to shop and eat and hang out at the local establishments. Then depending on how we’re treated, we’re going to either tell all our friends to come with us the next time, or to not go to that town at all.”

Because the one certainty, Collier says, is there will be a next time. Motorcyclists love to head out on the highway, and Collier says they are going to go where the ride is fun and the people are welcoming.

For towns looking to attract repeat visitors, rolling out the red carpet for motorcycle clubs might be just the ticket.