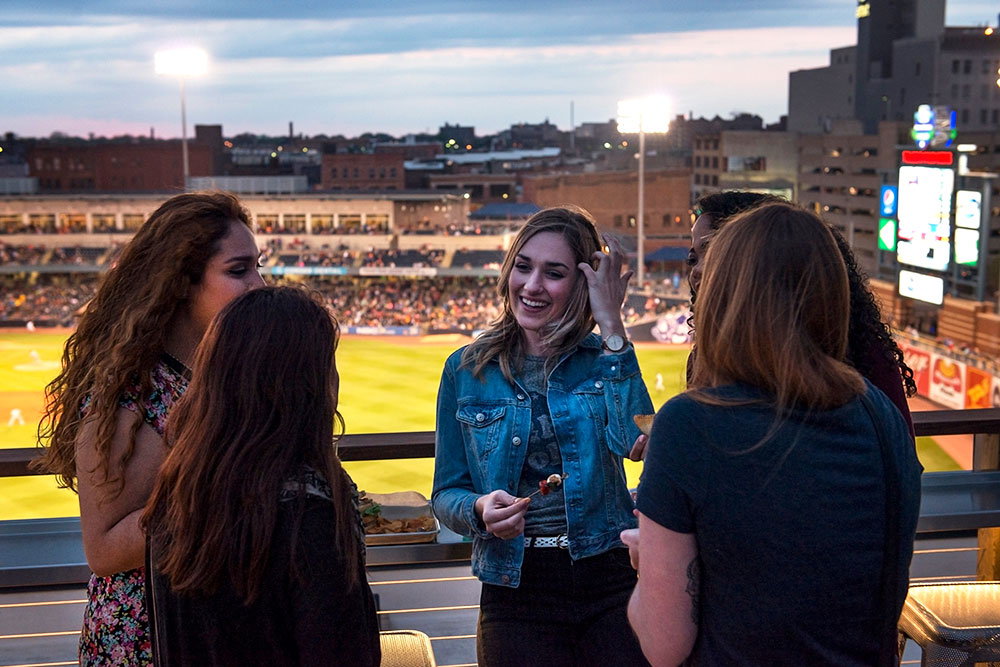 The Bay Area may have their Golden State Warriors and Boston may have their Red Sox, but just because your home town’s team isn’t nationally televised every week doesn’t make them any less exciting to watch.

Minor league teams are the pride of their small to mid-sized cities, offering a high level of athleticism alongside quirky local traditions – for a fraction of the price of a major league ticket.

Looking for a city filled with fans who have a true love of the game (not to mention star athletes in the making)? You can’t do better than these five cities, where minor league sports are a major pastime.

If there’s one thing you need to know about Toledoans, it’s that they show up for their beloved Mud Hens. The Toledo Mud Hens, a minor league baseball team in the International League and an affiliate of the nearby Detroit Tigers, have a long history in the city, going back all the way to 1883. Their quirky moniker comes from the American Coots birds (AKA mud hens) that used to surround their original stadium, which was located near a marsh. The team didn’t stick to that swampy stadium location, but the name remained.

But the Toledo Mud Hens have more than a long history in the city; they also have some major wins under their belts. In 2005 and 2006, the Mud Hens won the Governors’ Cup championship, and this past year they finished first in the International League West, but ultimately lost out to the Durham Bulls in the semifinals.

Not only do the Mud Hens routinely pack the summer stands with fans at their Fifth Third Field in downtown Toledo, but they can also claim a lot of responsibility for giving the downtown revitalization some much-needed momentum. In 2002, nearly 50 years after they had left the city for a park in the nearby suburbs, they came back – with fans welcoming them with open arms. After the Mud Hens made the leap to go back downtown, new businesses and restaurants followed suit. Today, an entire entertainment district, nicknamed Hensville, serves as the new heart of downtown with craft beer tasting rooms, art galleries and the largest souvenir store in minor league baseball, called the Swamp Shop.

If you want a big-city sports atmosphere set in a charming small town, look no further than Hershey, PA – home to the Hershey Bears. The Bears, who have the most titles in the American Hockey League and are a feeder team for the Washington Capitals, have an almost legendary status in the league, as well as in all of sports. In fact, hockey superstar Gordie Howe once said that “everybody who is anybody in hockey has played in Hershey.”

The Bears are well deserving of all these accolades, given that they are one of the winningest teams in the AHL, competing in 23 Calder Cup championships (more than any other team that’s currently in the league) and winning 11 of them.

In addition to all of their shiny Calder Cups, the Bears also have the bragging rights for being the AHL’s oldest and most reliable team: They are the only franchise that’s been part of the league without leaving since 1938. This longevity and winning record make them hometown heroes – and you can guarantee that Giant Center will be filled with fans on any given game night. The Bears been known to have as many as 9,000 fans in attendance, which is a record that no one in the AHL franchise has been able to beat.

And it seems like Hershey’s affection for the Bears is mutual. The team regularly gives back to the Hershey community with programs like Roaring to Read and the Hershey Bears Wellness All-Stars program to encourage exercise and healthy nutrition in children. Just recently, the Hershey Bears and their fans broke a world record for the largest number of teddy bears tossed (34,798 in total). Fans tossed their bears onto the ice as part of an annual toy drive that the team donates to local charities.

If any minor league sports team deserves the title of “iconic,â€ then the Durham Bulls baseball team would undeniably take the prize. Not only are the Durham Bulls a tough team to beat – with two national championships and six Governors’ Cups under their belts – but they also have a movie based on them. The 1988 romantic comedy Bull Durham is about a veteran minor leaguer (Kevin Costner) who is called in to coach a hotshot pitcher for the Bulls (Tim Robbins) to get to the majors. Bull Durham also stars Susan Sarandon (who plays center in the film’s love triangle) and is considered to be one of the greatest sports movies of all time. No big deal.

The Bulls originally began their run as a team in 1902 as The Durham Tobacconists, and later changed to the Bulls in 1913. Through it all – the inability to operate during the Great Depression and wars as well as league changes – baseball in Durham has prevailed, and the fans are here to stay. The Bulls’ home games, hosted at the Durham Bulls Athletic Park (affectionately called DBAP), are often packed and have an average attendance of about 7,600 fans.

In addition to the beloved Bulls, the Durham area is also home to the National Women’s Soccer League team, the North Carolina Courage and the North Carolina Football Club, both of which play in nearby Cary, NC. The bottom line? Durham is a great place to be a sports fan.

There’s a reason why Sports Business Daily named Fort Wayne as their no. 3 minor league market in the country in 2017: because their hometown teams know how to win – and how to draw a crowd. Fort Wayne is home to three different minor league teams, including the Midwest League Fort Wayne TinCaps, the East Coast Hockey League Fort Wayne Komets and the NBA G League Fort Wayne Mad Ants. Because of the overlapping of schedules, it’s a rare week when Fort Wayne sports fans have to go without seeing a game.

The Komets, one of the oldest sports franchises in Fort Wayne, have brought home 12 regular season championships, 12 division titles and 9 championship titles in the past 65 seasons of its history. Though the Komets have switched divisions a few times, their fans have remained faithful; in fact, nearly 8,000 fans show up for each and every game (with their attendance record standing at 10,593).

For the basketball fans in Fort Wayne, there are the revered Fort Wayne Mad Ants, who arrived in 2007 to fill the basketball-sized hole that had been left in the city since the sale of the Pistons to Detroit in 1957. Since 2007, the Mad Ants – a feeder team to the nearby Indiana Pacers – have won a championship title and are sixth in NBA G-League attendance. Not too shabby for just a little over 10 years in the city.

And if you enjoy hearing the crack of a bat and tallying up batting averages, you definitely don’t want to miss out on any Fort Wayne TinCaps games, right in downtown Fort Wayne. The TinCaps, a feeder team for the San Diego Padres, won the Midwest League Championship in 2009.

Charleston may only have a population of around 130,000, but the city is filled to the brim with arts, culture, tourist attractions – and a few favorite hometown teams to cheer for. One of their most successful franchises is the Charleston Riverdogs minor league baseball team, which is in the South Atlantic League. The Riverdogs, who are affiliated with the prestigious New York Yankees, played their first season in Charleston in 1994 and have since clenched two division titles.

But in addition to their win column, the Riverdogs are also known for one of their quirky and colorful co-owners, SNL alum and “Lost in Translation” star, Bill Murray. Murray is often spotted at Riverdogs games, and is easily considered one of their most impassioned fans. Besides Murray, you can expect to see plenty of fans in the stands at Riverdogs home games, and in 2017 they broke a record for welcoming over 300,000 fans for the first time in their franchise history.