The journey to Super Bowl LVI started in some unexpected places for these football stars. 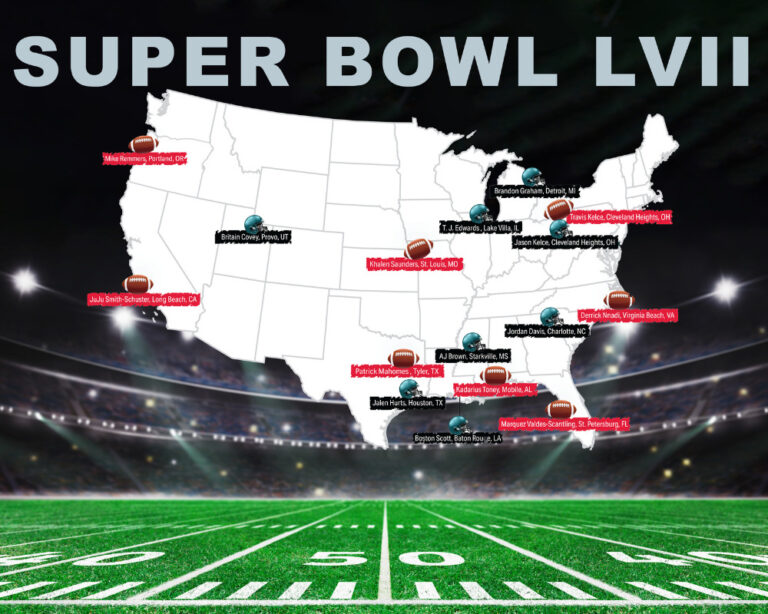 This year’s epic Super Bowl showdown between the Kansas City Chiefs and the Philadelphia Eagles has us thinking about what it takes to become a player of this caliber. Not only is it the dedication, countless hours of practice and support of friends and family, but something else…

These players are all hometown heroes. Today we’re celebrating the great cities they hail from — cities that no doubt will cheer louder than anyone on Sunday. Except for Donna Kelce, but more on that later.

Tyler, TX
Patrick Mahomes, quarterback
Why We Love Tyler: Less than 100 miles east of Dallas is Tyler. This Texas city is America’s Rose Capital and one of the best places to live in Texas. Tyler is also the birthplace of some amazing breweries, public art and is known for its long history of producing football greats, including Patrick Mahomes.

Long Beach, CA
Juju Smith-Schuster, wide receiver
Why We Love Long Beach: With 5.5 miles of the Pacific Ocean waterfront, Long Beach is nicknamed the “Aquatic Capital of America.” The city is just 20 minutes outside Los Angeles and embodies California cool, producing both Olympic greats and Juju Smith-Schuster. Long Beach is also vying to become the most bicycle-friendly urban city in America. The city’s parks department has earned several national beautification awards for their efforts.

Portland, OR
Mike Remmers, offensive tackle
Why We Love Portland: With a rich history of supporting both men’s and women’s sports, it’s no surprise that offensive tackle Mike Remmers calls Portland his hometown. The city is home to tons of things to do, from hiking to eating to visiting the site of your favorite song. And if you’re looking to set more permanent roots, Portland is the perfect home base for remote workers and has one of the most diversified economies in the country.

Mobile, AL
Kadarius Toney, wide receiver
Why We Love Mobile: Nestled along the Gulf Coast is Mobile, AL, the hometown of Eagles wide receiver Kadarius Toney. This southern city doesn’t skimp out on amenities. You’ll find everything from cool museums to spooky spots. There are even fido-friendly spots for you to grab a beer at game time with your four-legged friend. Mobile doesn’t miss an opportunity to party and goes all out for Mardi Gras each year.

St. Louis, MO
Khalen Saunders, defensive tackle
Why We Love St. Louis: Looking for a city to start a business, view wildlife or stop and smell the roses? Look no further than St. Louis. Khalen Saunders’ hometown is constantly evolving but remains an affordable, fun place to live. The city is also the home of Anheuser-Busch and is a haven for tech entrepreneurs. Plus, St. Louis’ easy accessibility makes it an excellent spot for those who love to travel.

Virginia Beach, VA
Derrick Nnadi, defensive tackle
Why We Love Virginia Beach: Nestled at the meeting point of the Chesapeake Bay and the Atlantic Ocean,  Virginia Beach has it all — gorgeous beaches, delicious food that is locally sourced, and, if you’re expecting, it’s the perfect place to have a babymoon. In addition, this welcoming city of just over 450,000 people is also working to become more diverse, open and inclusive. As a result, Virginia Beach is one of the Best Places to Live in America!

St. Petersburg, FL
Marquez Valdes-Scantling, wide receiver
Why We Love St. Petersburg: Known for more than 300 days of sunshine each year, waterfront parks and an abundance of arts, St. Petersburg is the quintessential Florida city. Grab a seat at The Dog Bar to cheer on Marquez Valdes-Scantling with your furry friend, or visit the popular Fairgrounds at St. Pete. How ever people spend their time here, it’s easy to see why St. Pete is one of the best places to live in Florida.

Houston, TX
Jalen Hurts, quarterback
Why We Love Houston: Everything’s bigger in Texas, including the crop of football legends that come from the Lone Star State; Jalen Hurts hails from Houston, which is one of the fastest-growing metropolitan areas in the country. It’s easy to eat like a Texan in this foodie-forward city. Houston residents have access to high-quality healthcare options, diverse neighborhoods and more than 370 parks, giving them plenty of places to play, which are just a few reasons to live here. Don’t know where to begin? Pay a visit to M-K-T, a 22,00-square-foot mixed-use space that houses restaurants, retailers and other businesses and is one of the country’s most impressive adaptive reuse projects.

Starkville, MS
AJ Brown, wide receiver
Why We Love Starkville: Hail State! Starkville is home to Mississippi State University and is the perfect southern college town. AJ Brown’s hometown understood the assignment when it comes to celebrating. Starkville hosts an annual SOUPer Bowl. The event is a community-wide competition where residents can vote on their favorite soups and chilis from local restaurants. The city also has a colorful history and is home to more than a dozen public art pieces. Win or lose; you’ll want to grab a drink at The Guest Room, a cozy speakeasy soaked in Southern charm.

Charlotte, NC
Jordan Davis, defensive tackle
Why We Love Charlotte: Queen City means business. Charlotte is home to more than half a dozen fortune 500 companies, the nation’s second-largest banking center and the city that Jordan Davis calls his hometown. The fun is never done in this southern city, from its great bakery and brewery scenes to the NASCAR Hall of Fame. Charlotte is the biggest city in North Carolina and is one of the best places to live in the state. And the cherry on top of it all? Charlotte is working hard to be an inclusive city and has a reputation for being LGBTQ-friendly.

Provo, UT
Britain Covey, wide receiver
Why We Love Provo: The list of reasons why Provo, UT, is a great place to live is exhaustive — the city is affordable and a hotspot for a variety of careers, including freelancing and tech. Nestled in the picturesque Utah Valley, Provo is the state’s third-largest city. It lives up to its nickname as the “Happy Valley,” with an overall high state of well-being and remarkably beautiful and peaceful surroundings. Residents like hometown hero Britain Covey can also participate in various outdoor recreation opportunities, from hiking to kayaking.

Detroit, MI
Brandon Graham, defensive end
Why We Love Detroit: There is more than meets the eye when it comes to spending time in Detroit. Motor City has an incredible arts scene, delicious pizza (obviously!) and is the perfect place for up-and-coming artists and remote workers alike. Recently, Detroit has undergone significant revitalization and is one of the best places to live in Michigan. And if you’re planning a move to Brandon Graham’s hometown, there are plenty of people who are willing to help you get plugged into the community.

Baton Rouge, LA
Boston Scott, running back
Why We Love Baton Rouge: One of the best tailgating cities and home to Boston Scott, it’s easy to understand that deep love of football runs in Baton Rouge’s blood. There are countless reasons to move to Baton Rouge. Still, the city’s mix of historical appreciation, modern-day amenities and robust economy make it the perfect place to settle down. Just visiting for the weekend? We’ve got you covered.

Lake Villa, IL
T.J. Edwards, linebacker
Why We Love Lake Villa: Roughly 50 miles north of Chicago is the cozy community of Lake Villa, IL. Originally settled as a resort town, today, Lake Villa is a business-minded, vibrant and diverse community. At the center of town is Lehmann Mansion, which was built in 1912 and hosts various events, including a night at the haunted mansion in the fall. Linebacker TJ Edwards calls Lake Villa his hometown, and the village is tight-knit. It’s also close enough to Chicago to appreciate all that big-city life has to offer.

At Super Bowl LVII, Donna Kelce will officially become the first mother to have two sons play against each other in the Super Bowl. pic.twitter.com/4GSSeykGQD

Of course, one of the biggest stories coming out of this year’s matchup is the sibling rivalry between the Kelce brothers. Jason, the center for the Philadelphia Eagles, will go head-to-head against his younger brother, Travis, who is a tight end for the Kansas City Chiefs. The Kelce brothers are the first set of siblings to compete against one another in the Super Bowl, and we’re sure that either way, their hometown of Cleveland Heights will come out victorious.

The brothers grew up in Cleveland Heights, OH, a streetcar suburb of Cleveland. There are countless reasons why people are making the move to Cleveland, including the area’s affordability, growing talent sector and creative community. The city is also known for its serious commitment to sports and is home to three professional teams.

If you’re wondering who we’re cheering for, it’s Travis and Jason’s mom, Donna. Donna has gained notoriety for her split jersey and commitment to being neutral for Sunday’s showdown. She even showed up to opening night with cookies for each of her boys!