6 Places Where Weird Donuts Are on the Menu

Forget glazed or powdered. These offbeat bakeries are making donuts with ingredients like bacon, sweet corn and fried chicken — we dare you to try them all. 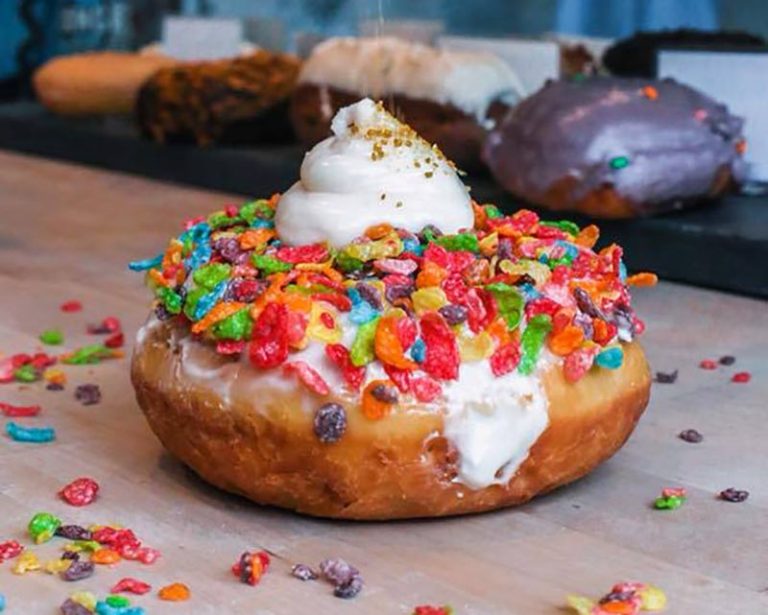 If we’re being honest, donuts are one of the best foods ever, but sometimes the same old chocolate glazed and jelly-filled donuts just don’t cut it. Forget glazed or powdered. Just in time for National Donut Day, these offbeat bakeries are making donuts with ingredients like bacon, beets and fried chicken — we dare you to try them all.

1. The Dead Elvis at Psycho Donuts

Campbell, CA
With a name like Psycho Donuts, what did you expect? Describing itself as the world’s ‘first and only light-hearted asylum for wayward donuts,’ pretty much everything on the menu here is weird and out of the box, which is why we love it so much. Our personal favorite? Getting its name from Elvis’ favorite food — a peanut butter, bacon, banana and jelly sandwich — the Dead Elvis is a cream-filled concoction with bananas, bacon, peanut butter and jelly.

2. The Dirty South at Gourdough’s

Austin, TX
Gourdough’s means business when it comes to donuts. The Austin-based eatery serves up some of the most unique donuts on this side of the Mississippi. The Dirty South is a must, though. This donut combines hand, battered chicken fried steak, a potato pancake and creamy white gravy, all topped with cranberry habanero jam and served a top of a piping hot donut.

Cincinnati, OH
Mixing a grilled cheese with a soft, yeasty donut sounds ridiculous, but don’t knock it till you try it. A delicious “inside-out” donut is the star, oozing with melted cheese. Go with the Classic GCD to start, and once you’re feeling even more adventurous, try the Cinnamon Crunch complete with graham cracker, marshmallow mascarpone and cinnamon and sugar. Tom + Chee is a small chain that’s currently expanding, so don’t worry. If you get hooked in Cincinnati, chances are you can get your hands on a grilled cheese donut in other cities, too!

4. Any of the “Strangers” at Strange Donuts

St. Louis, MO
Strange Donuts is a donut shop for everyone. First, they have their classics: Glazed, Rainbow Pony or Jelly-filled. Their next step up gets a little weirder, but nothing we haven’t seen before with flavors like Blueberry Cheesecake and Samoa Roll.

It’s their next tier up that really turns the weirdness up a notch. Each week, the St. Louis-based bakery offers a few “Strangers,” or unique, never-before-seen donut flavors. Unfortunately, if you want a Stranger, you’ll have to act fast as they often sell out quickly. Flavors rotate in and out but include adventurous bites like Grasshopper and Blue Hawaiian Punch. Worth a try, even just to say you tried it, right?

Charleston, SC
It’s not a simple choice of chocolate glazed or plain here. Glazed Gourmet is seriously upping its flavor profiles and catering to a more sophisticated palate. Each week they offer a dozen or so samplings that rotate in and out. The weirdest donut on the Charleston eatery’s menu? We think it has to be the Sweet Corn and Blueberry, which combines sweet corn custard, blueberry glaze and corn lemon shortbread. Customers have only good things to say about it, so something must be working!

Decatur, GA
This inventive donut shop in Decatur, GA, has been featured on Food Network and the Cooking Channel, so you know you’re about to bite into something that has been praised by the food gods. Because of its rising popularity, it’s not unusual for folks to line up out the door for one of Revolution’s tasty samplings. If you’re craving something savory and sweet, you’ll want to try the Bacon-Carmel Yeast Roll, which combines a sweet salted caramel glaze made in-house and locally sourced bacon…a match made in heaven.

Still hungry for more? Make your own delicious donuts, like these Sweet Potato Doughnut Holes With Cardamom-Orange Glaze or these Baked Chocolate Spice Donuts.