Looking for an awesome $5 lunch or a hidden gem restaurant in a new place? Turn to the true experts: musicians on tour. 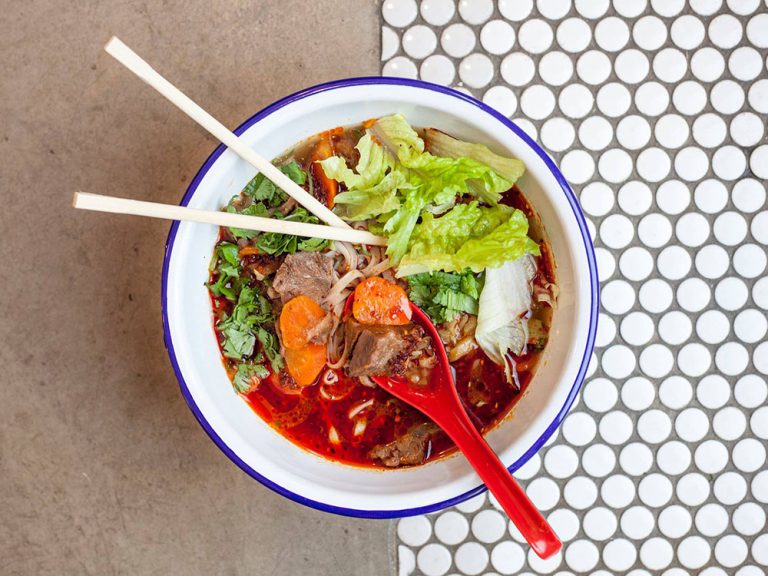 If you ever find yourself looking for a good, cheap lunch in a new town, ask a drummer where to eat. Or a guitarist, singer, bassist … even a tambourine player will probably have some good suggestions! Touring musicians know America’s roads — and roadside food — better than most, thanks to long, late-night drives after shows and random days off in small towns while on cross-country tours. And now three musician friends are sharing all their secrets.

Luke Pyenson, Charlie Ferguson and Adam Schatz play in and have toured with bands including Frankie Cosmos, Hurray For the Riff Raff, Landlady and Japanese Breakfast. For years they and their musician friends have been sharing their hot food tips with one another on a spreadsheet and recently they turned that spreadsheet into a very simple but useful website, TourFood.us.

TourFood is a wealth of delicious information. The database holds hundreds of their favorite hidden gem eateries across North America (all 50 states and a few places in Canada), and nearly every spot on the list offers several menu items for $20 or less. (In many cases prices are quite a bit lower than that, even).

Did you know that in Dearborn, MI, you can order fattoush from a Lebanese restaurant with a drive-through window? It’s called Cedarland, and TourFood.us says, “Take the opportunity to roll down the window and say, ‘baba ganoush.’ When else will you get to do this?”

You can search for suggestions along a certain driving route, or you can get recommendations for a specific city. You can also filter the results by type of cuisine and whether there are vegan and/or vegetarian options. There’s even a “late-night” tag to denote spots that are open 11 p.m. or later (Fuel City Tacos in Dallas, TX, is cash only and open 24 hours, they say, making it a great destination for post-show eats).

The best part? Because all the spots have been suggested by folks who’ve actually eaten there, several of the listings include tips on what to order — for example, the brisket tacos at Garcia’s Mexican Food in San Antonio, TX are worth the long wait on weekends, they say, and Gordo Taqueria in Albany, CA has tasty crispy tacos on their “secret” menu.

No road trip plans? No problem! Maybe you’ll get inspired to plan an adventure after scrolling through the whole list. There are housemade Chinese dumplings at Three Fold in Little Rock, AR; malted iced coffee at Tandem Coffee in Portland, ME; banana leaf-wrapped tamales at Pepe Delgados in Norman, OK. … Now I’m getting hungry. I can’t play guitar, but are there any bands in need of a tour manager or merch person? I can be packed and ready to go within an hour, just so long as we can grab the lunch buffet at Abyssinia Ethiopian Restaurant in Denver, CO. It’s apparently just $1.75 a scoop!