Skip to content
Home > Love Where You Live > Finding the Good: How Two Communities Are Assisting Their Ukrainian Sister Cities

Finding the Good: How Two Communities Are Assisting Their Ukrainian Sister Cities

U.S. communities work hard to assist their Ukrainian sister cities during a time of war. 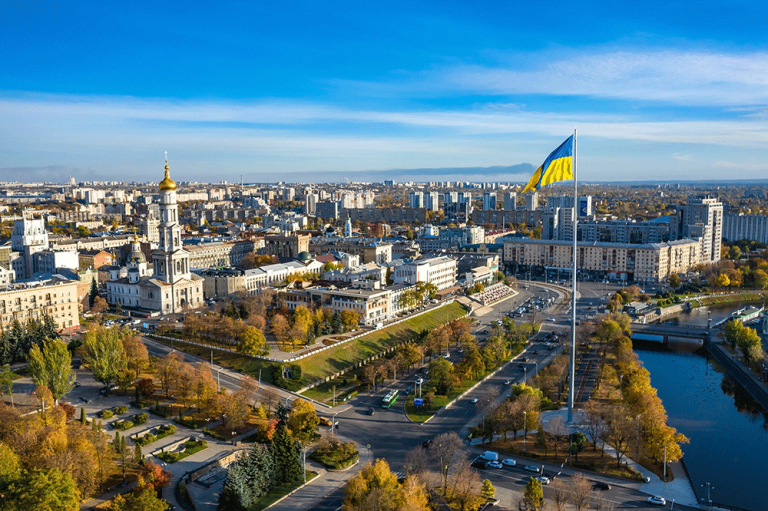 Whether you catch a few minutes of a local news segment, scan a major newspaper’s daily headlines or simply overhear a conversation while running errands, stories of devastation, hardship and turmoil emerge. But while it might seem that instances of bad always take center stage, it is in these moments that we often see the best of humanity.

Take, for instance, the Russia-Ukraine war. Since Russia first invaded the Eastern European country on Feb. 24, mass destruction has followed. Buildings that once served core purposes have been turned to rubble. Many structures that are still standing echo from vacancy. People have resorted to taking shelter in subway systems or have fled west to find safety in countries like Poland. And as of April 12, the Office of the United Nations High Commissioner for Human Rights reported 1,932 civilian deaths, with the chance of that number being even higher.

Horrific is the only way to describe what has and continues to take place in this country. Amid everything that has happened, though, glimmers of hope and good have shone through. Ukraine has shown what true bravery and grit entails. People from all over the world have offered their support (substantively and symbolically), and many U.S. communities with sister cities in the country have stepped up to assist their Ukrainian counterparts.

Created by former President Dwight D. Eisenhower in the 1950s, Sister Cities International is a nonprofit that works to promote peace through mutual respect, understanding and cooperation by fostering bonds between people of different communities worldwide. When deciding on a sister city, communities often look for similarities — be it demographics, interests, industries. And to make a relationship official, the mayor (or highest elected or appointed official) from each city signs a memorandum of understanding.

We sat down with individuals from Rockford, IL, and Cincinnati, OH — both of which have sister cities in Ukraine — to learn more about the bonds they’ve established with these communities and how they are lending support during this difficult time.

A visit from a Kyiv soccer team back in 1994 sparked a relationship between Rockford and Brovary, a suburb of Kyiv in northern Ukraine, with the two officially becoming sister cities in 1995. Soon after that, a Rockford-based group called Kids Around the World, which works with children in multiple countries to ensure their spiritual, physical and emotional well-being, traveled to Brovary to build a playground. Since then, the bond between the cities has only grown. Bovary’s then-mayor visited Rockford, his wife lived in the city for six months and their son got married in the area, among other things.

“I think that really solidified much of our relationship,” says Rockford Mayor Tom McNamara, who took office in 2017.

While McNamara says he usually stays in touch with the mayor’s office, checking in from time to time and exchanging pleasantries around holidays, he started reaching out regularly to see if they needed anything when the threat of an invasion started to escalate.

“I think this is why you have sister cities, right? I mean, you obviously have sister cities when things are good, and you’re learning best practices — if it’s crime prevention, if it’s economic development — you have partnerships,” McNamara says. “But really, you need friends when you’re struggling the most, and when we saw Brovary struggling and going through this horrific time, we had to do something.”

Four organizations — the City of Rockford, Rockford Area Convention and Visitors Bureau, Kids Around the World and the Community Foundation of Northern Illinois — came together to develop the Brovary Relief Fund in early March. Since then, Rockford has raised over $160,000, purchased more than $50,000 worth of medicine and sent over 270,000 meals.

As far as distributing the collected resources, McNamara says they’ve partnered with the Chicago Rockford International Airport and other businesses like SENATOR INTERNATIONAL, a global logistics company. While it has taken a lot of coordination, they’ve been able to deliver supplies to Brovary in about one week.

“They’re overjoyed. They’re humbled, but I would also say they just need so much,” McNamara says of those in Brovary. “Not downplaying what we did, but what we did is really a small, small gesture of what they actually need.”

“I think we’re just called to do whatever we can,” he says. “And I think we’re going to continue to raise funds, and as requests from Brovary come in that are detailed and ones that we believe we can fulfill or that we can find partners to fulfill, we’re going to make every effort to do that for them.”

Both inland river cities with strong manufacturing bases, education institutions and arts organizations, Cincinnati and Kharkiv, a city in northeastern Ukraine, saw many opportunities for collaboration and became sister cities in 1989 when Ukraine was still part of the Soviet Union.

After becoming independent in 1991, Bob Herring, president of the Cincinnati-Kharkiv Sister City Partnership, says things changed significantly as Ukraine was looking to establish a functioning democracy and free market.

Cincinnati was better able to assist its counterpart in this way after the U.S. Congress launched the Open World Leadership Center. It started in 1999 as a pilot program and was made official in 2000. This international exchange agency introduces young leaders of emerging countries, including Ukraine, to American democratic governing systems and free-market operations.

“So, for example, there was a group during my time as president that came over from Kharkiv to take a look at energy efficiency — what are the best practices here,” Herring says. “So we would connect them with Duke Energy, with University of Cincinnati, with solar power companies … just to talk about best practices and energy conservation.”

Over the last 33 years, these cities have connected in a host of ways, resulting in numerous friendships. For example, Cincinnati’s Jewish community helped restore Kharkiv’s synagogue, student exchanges happened regularly prior to the pandemic and an international children’s art program was hosted annually, where art by local and Ukrainian students was displayed in Cincinnati and then transferred to Kharkiv to be on exhibit in a museum, according to Herring.

Everything — from the frequency of their communication to the topics they discuss to the plans they make to just the overall look of Kharkiv — has changed since Russia invaded Ukraine.

“We have a picture of a gallery in the museum where the windows are blown out and all kinds of stuff is strewn upon the floor — that’s the Mariemont (Elementary School) kids’ art, along with the Kharkiv kids’ art,” Herring says.

And while multiple text messages and emails were exchanged between the two cities when the war started, Herring says those have tapered off as many people have left Kharkiv.

To aid and support their sister city and its country, citizens and organizations around Cincinnati stepped up right away. The City Council passed a resolution supporting Ukraine and U.S. sanctions against Russia, Cincinnati’s Police Department donated almost 1,000 ballistic helmets, landmark buildings have been lit up in blue and yellow to show solidarity and multiple nonprofits and charities in the greater Cincinnati area have collected supplies and funds.

One organization raising money is the Cincinnati-Kharkiv Sister City Partnership, which, to date, has sent approximately $84,000 to Red Cross Kharkiv. Herring says the organization will soon begin sending money to mayors of towns surrounding Kharkiv, as well. One town needs funds for a generator to keep the electricity running in their hospital.

While money continues to be raised every day and new initiatives that haven’t yet been announced are in the works, Herring also has other things on his mind.

“The interesting question, which it’s way too soon to ask it, but never too soon to think about it, is the rebuilding. ‘How can Cincinnati help Kharkiv rebuild?’ And that’s all, of course, based on the assumption that it remains part of Ukraine, free and independent,” he says.