Five Fun Twists on Crosswalks and Other Pedestrian Crossings

Crossing the street has become an artistic endeavor in many cities 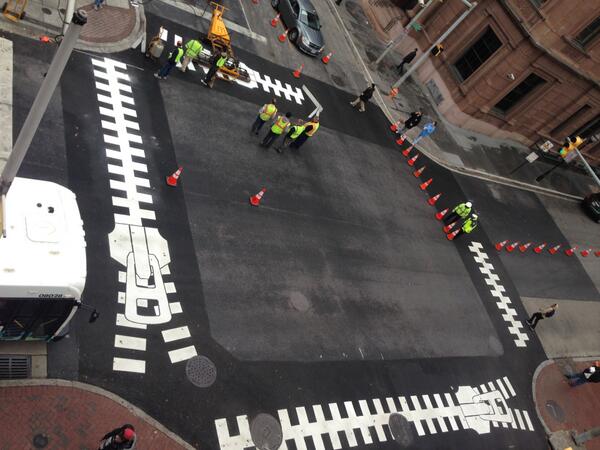 In the recent past, getting across the street at an intersection was boring, routine – downright pedestrian, even. Not anymore. As art has found its way into more places than ever before, the walkways within intersections and across city streets have become prime targets for clever, often elaborate expressions of creativity. Here are five eye-catching crosswalks among the many popping up across the U.S. and the world. (Just remember: looking both ways before crossing will never go out of style.)

Rainbows are not an uncommon sight throughout San Francisco’s Castro District, but now the symbol has become as prominent as ever with the addition of a bold, four-way rainbow crosswalk at one of the district’s major intersections. The crosswalk is part of a larger streetscape-improvement project that aims to enhance safety and livability along Castro Street as it runs between Market and 19th streets, encompassing wider sidewalks, repaving, new lighting and street trees. The project “will further elevate the neighborhood experience of an already famous city destination” within the historic center of the LGBT (lesbian, gay, bisexual, transgender) community, according to Alex M. Murillo, public affairs officer for San Francisco Public Works. More than 4,000 people voted on the final decorative crosswalk design.

As a fun way to emphasize the importance of stopping at red lights rather than crossing an intersection against the flow of traffic, the itty-bitty-electric-car innovators at Smart devised an attention-grabbing crosswalk idea. They set up The Dancing Street Light in a square in Lisbon, Portugal, and connected the busy intersection’s actual crossing signal with a life-sized dance room on the square. Random passers-by were invited to bust moves in the dance room, and those moves took stick-figure life on the displays of each crossing signal. As a result, more pedestrians paused at the square’s red lights – an 81 percent increase, Smart calculated – and enjoyed a little boogie-down exercise while they waited.

Visitors to Charlotte, N.C., who drive downtown to the NASCAR Hall of Fame and pause at one of the stoplights outside might be tempted to rev the engine and peel out at the first sign of green. It’s easy to feel like racing when encountering the unique checkerboard crosswalks at each of the four intersections surrounding the building. Simulating the start-finish line of a typical track, the crosswalks have been in place since before the hall opened in 2010. According to director Winston Kelly, the idea originated with locals who, along with numerous visitors, “think the checkered flags are very cool and representative of NASCAR in Charlotte and the surrounding region.” The hall itself boasts 50 interactive exhibits, 1,000 artifacts and dozens of cars from throughout the history of this fast-paced motor sport.

Crosswalks took center stage during Mount Pleasant, Mich.’s third month-long Art Walk Central festival in August 2014. As artists and art lovers descended on the inviting, family-oriented community smack dab in the middle of Michigan, which also is home to Central Michigan University, the wide range of activities included painting several pedestrian crosswalks with upbeat, multicolored designs. More than just a celebration of creativity, Art Walk includes juried competitions for adults and children with prizes reaching $10,000. “We wanted to bring some creativity into our community,” says Kathy Hill, who directs the event. She notes the festival continues to grow from its initial 45 host venues and 195 pieces of art on display during the month, including paintings, sculptures, murals – and, of course, crosswalks.

Glancing down toward the street, it might look as if Baltimore’s zipper is going down – or perhaps it’s on the way up – on the pavement at the intersection of Eutaw and Fayette streets, right outside the city’s famed, century-old Hippodrome Theatre. Installed in late 2013, “the zipper“, designed by prominent local artist Paul Bertholet, is among several whimsical crosswalk designs commissioned and installed through a public-art project coordinated by the mayor’s office, transportation officials and Baltimore Office of Promotion & The Arts. Along with “the monster” and “hopscotch”, the zipper now graces one of three landmark intersections in the city’s bustling Bromo Tower District.