The Best College Football Traditions Around the Country

When it comes to passion and pageantry, these college football game-day traditions are unmatched. 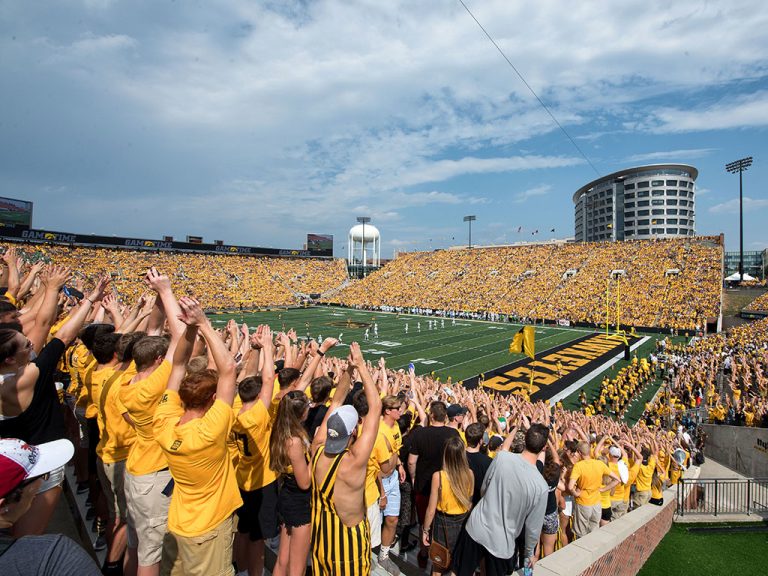 Football is America’s most beloved sport, with some fans treating it like a religion. And when it comes to college football traditions? They are unparalleled. It’s no surprise that universities around the country have outstanding traditions that add school pride every Saturday in the fall.

Nothing unites a fanbase like a tradition that persists year in and year out. These traditions add fun and school pride to each home game, perpetuating fans’ adoration towards their beloved teams and schools, fortifying America’s love for the sport. School loyalty crosses generations via this common bonding. And so, alums can rest assured that they will feel the warm embrace of a tradition — be it a tailgate, a fight song or a quirky dance — to greet them upon their return to their beloved schools.

Here are some of America’s best college traditions that have stood the test of time and united generations of students, alumni and fans.

The United States Military Academy and Naval Academy have one of the most notorious rivalries in college sports, and the illusive Army vs. Navy game is one of the most talked about every fall. Though their rivalry may be well-known, some of their long-lasting traditions are not. For instance, one of their most distinctive traditions is the prisoner exchange.

You won’t find this tradition anywhere else, where students would never dream of passing enemy lines. No, they do not exchange actual prisoners of war at their annual football showdown — although that would be quite the spectator sport. Instead, a group of juniors from the Army and Navy switch places as part of the Service Academy Exchange Program and spend the entire fall semester behind ‘enemy’ lines. Then, the military personnel returns to their respective teams during the annual showdown. This storied tradition fosters a sense of camaraderie amongst these rivals, which is crucial since they will serve America as a united front just a few months later.

Ohio State’s Dotting of the “i”

Dotting the “i” isn’t just done in English 101 at Ohio State. The state’s flagship university boasts one of the country’s best marching bands, known for their famous “Ohio” script formation. This aesthetically-pleasing configuration features the 228 band members marching perfectly in sync as they write out the word “Ohio” (in cursive, no less).

Fans in the stands watch as they march like ants in perfectly intersecting lines as they create the signature Ohio State symbol (pun intended). This culminates with the dotting of the “i.” An 86-year-old tradition in which a sousaphone player, or a rare special guest, kicks out of line, dots the “i,” and theatrically bows to either side of the stadium. The honor is bestowed upon a different fourth- or fifth-year sousaphone player each time the band performs the script at the beginning of each home game. The crowd always responds with boisterous cheering, riled up for game time. Anyone watching this breathtaking, chill-inducing display will quickly understand why they’ve been dubbed “The Best Damn Band in the Land.”

The University of Iowa’s Hawkeye Wave

Arguably the sweetest tradition in college football, the Hawkeye Wave just might make you shed a tear. Because the Wave began in 2017, it is one of the more recent traditions on this list. It was first established when the University of Iowa Stead Family Children’s Hospital was completed. Iowa’s Kinnick Stadium is right next to the hospital, paving the way for something special.

At the end of the first quarter, the stadium’s nearly 70,000 fans, coaches and players from both teams band together for a heartwarming moment: waving to all of the patients and families inside the hospital. Previously, this was done alongside the tune “Wave on Wave” by Pat Green. However, the relatively new tradition is still developing. This past spring, the university asked for fan input on the Wave’s song. The fans asked that the honor be given to the children. So, starting this fall, each game’s Kid Captain will have the additional duty of selecting the song for the Wave. This gesture and tradition exemplify why Iowa City has been touted as warm, kind and generous — they don’t call it ‘Iowa nice’ for nothing!

Have you ever seen a buffalo sprint at full speed? Those who have attended a game at the University of Colorado Boulder have!

The Colorado Buffalo’s distinct tradition is one of America’s closest events to the Running of the Bulls. At the beginning of each game, fans watch recordings of C.U.’s buffalo mascot, Ralphie, running across the field throughout the school’s history. Then, the announcer bellows, “Here comes Ralphie,” as Ralphie is released from her pin, wrangled by several, very fast “Ralphie Handlers.” Next, she (Ralphie is always a female because they are smaller and less aggressive than males) is led around the perimeter of Folsom Field at full speed. Fans go wild as the entire Buffalo football team follows Ralphie. After Ralphie runs, her custom-made trailer is parked near the north end zone for fans to come and say hi. There have been 6 Ralphies in C.U.’s history, with Ralphie VI making her debut in the fall of 2021.

Due to the fickleness of any wild animal, if Ralphie is upset, the Handlers will not allow her to run. Even so, her handlers have been knocked over or fallen on occasion. They are considered varsity athletes who travel with Ralphie and care for her year-round.

If you ever find yourself at the corner of Magnolia Street and College Avenue, where Auburn University and the City of Auburn intersect, after an Auburn Tiger win, don’t be surprised if a rogue toilet paper roll hits you.

The area is aptly titled “Toomer’s Corner” and is named after Shel Toomer, a state senator and halfback on Auburn’s inaugural football team in 1892, who later went on to found the drugstore Toomer’s Drugs in 1896. Toomer’s has been an Auburn landmark ever since.

The tradition at Toomer’s Corner began long ago when the drugstore was home to the only telegraph in town and used to keep people in the loop. To report a Tiger win on the road, they would hang the ticker tape on the power lines. As technology has transformed, so has the medium that adorns the corner. The tossing of T.P. began in 1972 when Alabama was number 2 in the nation going into the Iron Bowl. Auburn halfback, Terry Henley, declared, “We’re going to beat the number 2 out of Alabama.” Hence, the T.P. that is still thrown to this day.

You have probably heard of Jesus Christ, but have you heard of Touchdown Jesus? Notre Dame fans know Him well.

As a Catholic university, Notre Dame is run by priests. In the 1960s, Father Theodore Martin Hesburgh sought to make the school one of America’s top universities. This led to the project of building the then largest on-campus college library in the country. The architects were told to create a functional, remarkable structure. And ultimately it included a mural featuring Jesus Christ and the Catholic Saints of Learning to amalgamate divinity and academia.

Today, Christ is at the center of the mural with his hands raised. The massive mural can be viewed anywhere on the South side of campus, especially from the football stadium. Since Jesus can be seen raising his hands in the endzone, he was naturally given the nickname of Touchdown Jesus. He is always there, refereeing every game and declaring every Fighting Irish touchdown.

Tailgating in The Grove at Ole Miss

If you find yourself in Oxford, Mississippi, on a fall Saturday, don’t be surprised to see tents with chandeliers, candelabras, catered food and even bartenders and televisions.

Rebel fans know how to throw a party. Dubbed by College GameDay’s Kirk Herbstreit as the tailgating “Mecca,” The Grove features the best tailgating scene in the country. Others agree as the 10-acre plot is often found at the top of the lists for must-see tailgating locations. So naturally, as many as 100,000 fans and visitors will gather there on game days. Oxford is known for its pervading sense of Southern hospitality, and the Grove is no exception. Even visitors with no personal ties to the school are welcomed by the warm embrace of anyone with a tent. Just make sure to dress up in your finest red, white and blue apparel, just like Rebel fans do.

Visitors can catch a unique sight at 7:30 pm on Friday nights when the Ole Miss Alumni Association’s Grove Society allows fans to rush the area and claim their spots. The university only allows tents, no vehicles, to preserve the property’s beauty. The Grove is so remarkable that many fans stay there to watch the game. As they say on the Ole Miss campus, the Rebels may lose a game, but they never lose a party.

A post shared by The Scout Guide Knoxville (@tsgknoxville)

The University of Tennessee’s Vol Navy

If you’ve seen a map of the U.S., you would know that Tennessee is landlocked, so you might be surprised to find out that a fleet of Vol football fans travels to games by boat. The tradition began in the 60s when Tennessee football broadcaster George Mooney became frustrated with the traffic jams before and after game time. Neyland Stadium, where the Volunteers play, is one of a handful of college stadiums in the country that can be accessed by boat. So, Mooney decided boating down the Tennessee River for gameday would be much easier. Thus the Vol Navy and all of the ‘sail’-gating that goes along with it were born.

In the early days of the Navy, there were no docks. Mooney would tie his vessel to a tree and climb through rocks to get to the stadium. Now, more than 60 years later, more than 250 vessels, from paddle boats to yachts, caravan their way to the docks near Neyland Stadium on game days. Mooring at Volunteer Landing is on a first-come, first-served basis. Membership to the boating association is free; they welcome anyone who desires to congregate at the docks, ready to cheer on their beloved Vols. 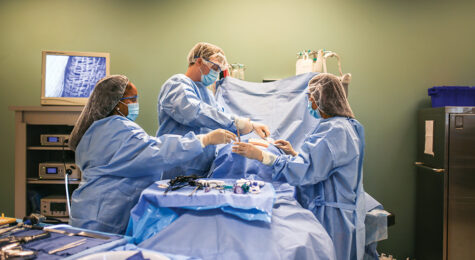