From a border collie to a Nubian goat, these cities elected pets as politicians. 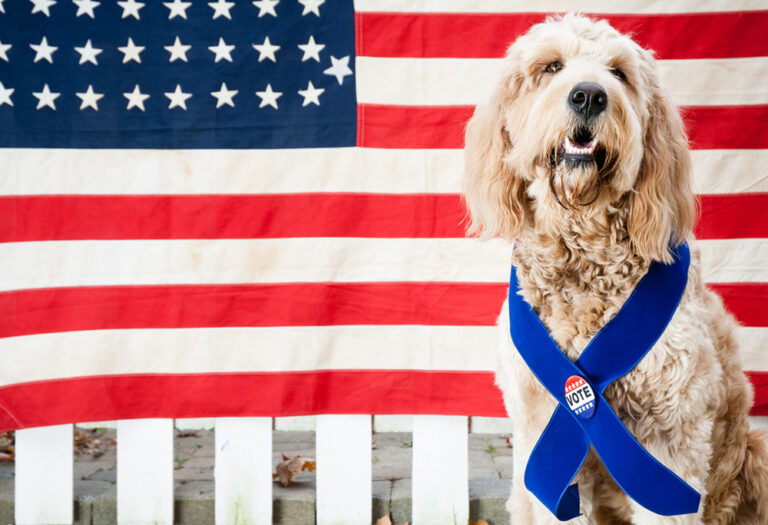 It’s election season, and you are bombarded with political ads, campaign commercials, yard signs for this guy, porch flags for this woman and on and on. It can drive a person nuts. And even though the air we breathe during voting season can get thick with political tension, it is still our civil duty to participate and vote.

With that said, we can all use a little break from the mud-slinging and he-said/she-said every now and again. So to help brighten your day and cleanse your political palette, here are some of the nation’s most adored politicians, no matter which side of the fence you’re on.

Back in 2012, the non-incorporated town of Idyllwild held its first mayoral election. Yes, the first-ever mayoral election. Max won against fourteen other dogs and two cats, winning the coveted seat for a year-long term by a landslide ⅔ of the entire vote. Constituents of Idyllwild cast their votes with a $1 donation, and when all was said and done, the town had raised over $30,000 for the town’s Animal Rescue Friends, or ARF, for short. Mayor Max served so well and was so beloved he served a second term. He was known for providing his community care, loyalty and wet-nosed kisses. The city is currently preparing for the arrival of Mayor Max III, who will take office in January 2023.

No, not the Lucy Liu you’re thinking of, which is spelled a little differently. This is Lucy Lou, the border collie who served in Rabbit Hash for eight years from 2008 to 2016 (right alongside Obama, if you think about it.) Her catchy campaign slogan was “The b**** you can count on!” And if that isn’t the catchiest slogan you’ve ever heard, you’re lying.

She broke the town record for being the first female mayor and some records with her run for U.S. president in 2016. I would’ve voted for her, paws down.

In 2009, the town of Omena decided to raise funds for their historical society and hold a mayoral election featuring town pets with cash donations acting as ballot votes. Sweet Tart, the Norwegian forest cat, stole hearts across Omena and won the race. With an elegant mane of dark brown, caramel and white fur, her kind green eyes and a set of tasteful pearls, she presides over Omena happenings with a firm yet gentle paw, and she dedicates eight of her nine lives to her line of duty. She may not be the mayor Omena deserves, but she is the mayor they need.

Mayor Lincoln lives up to her historical namesake in all ways but her height. The Nubian goat was young for holding such a post — only three at the time of her swearing-in back in 2019 — but she carries herself with fortitude and grit like goats three times her age. After inking her name to the official paperwork with a blue-dipped hoof, she swore herself into the role of defender of the people of Fair Haven’s well-being, and, donning an official Mayor’s sash across her belly, she has done so quite happily. Fair Haven, Vermont, is indeed indebted to her.

When news of Mayor Bosco’s election reached overseas, some people were unhappy to hear it. Somewhere in the offices of the People’s Daily newspaper in China, reporters frothed. They wrote and printed a story about the failings of American democracy, the degradation of our political system and the utter stupidity of our election processes. Because how could the town of Sunol, California, elect a Lab Rottweiler dog as mayor over two other human candidates?

Sunol quickly responded, saying it was only a joke and not to take it too seriously, but everyone knew the truth. Bosco took his role very seriously. He sat as mayor for over ten years in the small town of Sunol and even appeared on television game shows and other printed stories about the town! And if anyone still believes his election was merely a joke, try leading them to the very real and very regal statue of Bosco Ramos sitting stoically at the town post office and see what they say then.

A post shared by Mayor Parker The Snow Dog (@officialsnowdog)

The final and most recent elect on our list hails from Georgetown, Colorado, and comes in the form of a majestic Bernese Mountain Dog named Parker. Mayor Parker, the Snow Dog, is a very busy paw-litician who cares deeply for his community and makes every effort to go above and beyond his call of duty. For example, he’s the official mascot for the Loveland Ski area and is heavily featured on the slopes in full ski regalia. He is a member of the Scheels Sports team, encouraging residents to get active and stay active through adventure and games. He’s a huge sports fan, with a paw-ticular affection for the Broncos. And most importantly, he is a therapy dog for the Rocky Mountain Village Camp, a non-profit camp for children & adults with disabilities.

Mayor Parker the Snow Dog does so much, and we wish him a long and successful run as mayor. Come next election, we know who we’re casting our vote for…