"If I could live anywhere in the world, and money and opportunity were no object, where would I want to be?" 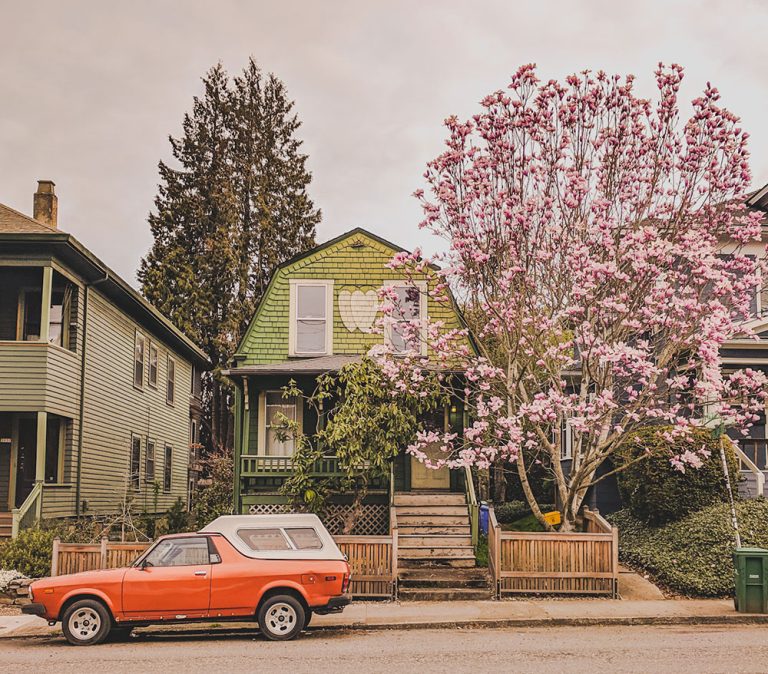 My former partner and I used to play a game called “Where to Live At the End of the World.” It was a pastime that combined my tendency towards fantasy with his increasing predilection for conspiracy theories. The goal was to find the perfect place to buy land and build a house for the family we talked about starting. We wanted to build a home where we could withstand whatever might come, from another recession to global warming.

Together, we’d spend evenings poring over data about property taxes and annual rainfall, craft breweries and concert venues, diversity and politics, not to mention the likelihood of natural disasters. We considered all sorts of cities, from Bloomington to Coeur d’Alene to Asheville. It was fun to picture the different lives we’d live in any given place, to imagine the people we might become if we started over somewhere new.

We never got that far, of course. Instead of building our dream home together, my perfect-on-paper partner left me in the middle of an expensive renovation of the house we shared in Tennessee. Suddenly single and eager for a fresh start, I began to play our game all over again – this time with only my own criteria in mind.

If I could live anywhere in the world, and money and opportunity were no object, where would I want to be?

I knew I loved the West Coast, and San Francisco specifically, but even my vivid imagination had a hard time conjuring up any possible future where I could afford the Bay Area, no matter how much I felt at home there.

Instead, my eye wandered north to Seattle, where I had enjoyed a brief visit during my college years, and to Portland, which I’d not yet had a chance to explore. Unfortunately, just the day before I’d run across the infamous, Pulitzer Prize-winning New York Times article on the huge Cascadia earthquake that’s approximately 50 years overdue. OK, I thought, maybe not the Pacific Northwest. I went back to window shopping neighborhoods in Columbus, OH.

Then I got another piece of unexpected bad news: I’d been laid off, for the second time in a year during which I was already emotionally reeling. The contractors I’d hired were still rebuilding the master bathroom my ex had gutted. I threw myself into applying for jobs, in desperate need of a Hail Mary pass.

And then one came – with a huge catch.

Of all the positions I’d applied for, only one wanted to hire me – a growing outdoor startup in Portland, OR. Exactly the place that, less than two weeks prior, I’d sworn off as even a fantastical possibility. There was no time to fly out for a visit or an apartment search. My new boss wanted me to start just two weeks from the date of offer. In the span of a month, I’d gone from daydreaming about a new life in a new city to purchasing a one-way plane ticket to relocate to a place I’d never seen.

Fortunately, all my years of playing “Where to Live At the End of the Worldâ€ had prepared me for the research phase of a cross-country move – even on a crazy time crunch. I knew immediately what my top priorities were as I threw myself into a brief, long-distance apartment hunt. Sad, despite everything, to be leaving behind my beloved home in Tennessee, I hoped to find an apartment with similar features, like a proper bath tub and a gas stove. Because of my deep infatuation with San Francisco, a bay window wouldn’t hurt. I also wanted a neighborhood that felt decidedly urban after spending most of my twenties wishing I lived in New York City. And after three decades in the car-dependent South, I wanted to be able to walk or take public transit to work and the grocery store.

I lucked into finding a place in Portland’s oldest neighborhood that was (barely, technically) in my price range, complete with all the features I was looking for. I signed the lease from the bedroom I’d once shared and announced my move on social media with an Oregon Trail meme. But I still had no idea what it would really be like living in Portland. I’d spent years feeling like a conspicuous outsider in the Bible Belt – what would my place be in a city known for liberal eccentricity? I knew that some things would suit me, like the city’s taste for extremely hoppy beer. But what if I couldn’t handle all the rain, or not knowing a single soul?

It turns out that meeting a city for the first time is a little like meeting someone you met through online dating. You might know some essential facts – like that Portlanders don’t use umbrellas or that kombucha is widely available on tap – but there’s no telling until you’re together whether the chemistry is there. And even if you’ve heard a million recommendations from friends and coworkers and the internet, you ultimately have to decide for yourself whether place or person lives up to the hype.

After what happened with my former partner, I wasn’t entirely confident in my abilities as a judge of character when it came to either cities or lovers. My tenure in Stumptown got off to an uneasy, suspicious start. After all, I’d barely had time to wrap my head around a sudden and monumental change. And no matter how much I’d contemplated moving, I’d never actually left my hometown.

I needn’t have worried, however. As it turns out, Portland is a nearly perfect fit for me, but it’s the kind of connection I would never have been able to map out on paper.

What I see now, in hindsight, is the reason there was never a winning round of “Where to Live At the End of the World,â€ no conclusion made about where we would build that forever home before we went our separate ways. We played not to answer the question of where the people we already were would be happiest, but because we were asking who we might become. In Bloomington, IN, where we spent a romantic weekend in an off-the-grid, hand-hewn cabin, we’d seen the possibility of blending my penchant for academia with his country roots. In Coeur d’Alene, we’d imagined a life as rugged individualists, living by our own rules. And after my partner left, I saw the potential in Columbus, OH, to live close to family as I never had growing up, to become the person I might have been under their closer influence. In Denver, I saw a future as a fit, tanned, craft-beer-sipping cool girl – the kind of persona I thought suited my newly single, thirty-something self. In Asheville, I thought maybe I could let my freak flag fully fly, and lean into my love of Appalachia.

But when it came to Portland, I had no time to form any expectations before my plane landed on a cold, February night and I stepped into a new life with two suitcases in tow. The pieces of this place that fit me – the independent bookstores and mossy trees and the city’s odd predilection for pinball – could reveal themselves naturally.  I had no idea who I might be in this new place, and that gave Portland and me a chance to accept one another at face value.

If I ever choose a new city again, I won’t play “Where to Live at the End of the Worldâ€ to decide. I’ll do my research of course, study up on the property taxes and weekend happenings and where I can find a good club sandwich. But I won’t make the mistake of thinking that picking a place is picking a version of myself to be. Like the old saying goes, wherever you go, there you are.