Everything you need to know about making a big move, according to experts and people who’ve done it. 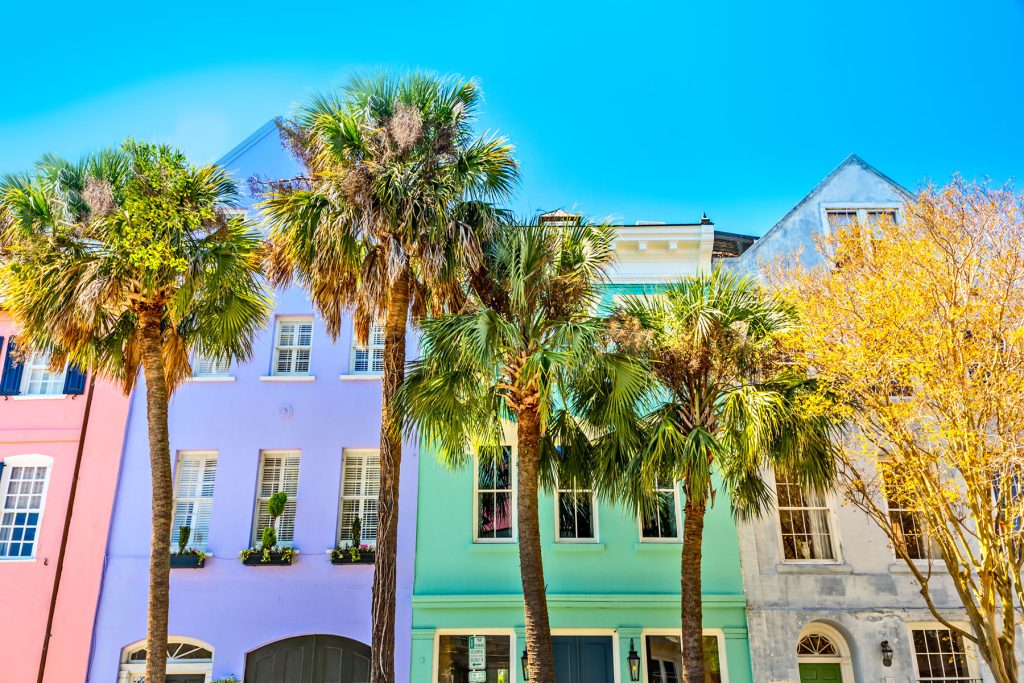 Liz Coughlin decided to make her “next big life move” a few years earlier than she originally planned. Living in Santa Monica, and co-owning a real estate brokerage, she suddenly began doing more business in the Palm Springs area, as a growing number of clients were looking to trade big cities for more peaceful retreats.

So, Coughlin made her own move to Palm Desert where the real estate market, like the climate, was hot, hot, hot.

The COVID-19 pandemic has prompted many, Coughlin included, to rethink their living situations. But if you’ve got your sights set on a city, it’s a good idea to give it a test run to make sure it’s a good match for your lifestyle, according to experts and those who have done it. If you take advantage of a trial period before committing to a new gym or streaming service; why not apply the same approach to something as major as a move?

As a real estate agent and someone who has relocated recently, Coughlin has a few pearls of advice for others wanting to give a city a test run.

“Definitely spend time, more than a weekend, in any place you are considering moving,” she says. “Weekends are fun and whimsical – so go for a full week. Get to know the neighborhoods, talk to people who live in different parts of town and get their insights.”

Coughlin also recommends allowing the move to help you reconsider your priorities, whether it’s in your career or personal life. Moving is a great change driver, she says. For Coughlin, she wanted to prioritize her dogs’ needs, as well as her own – which included being close to hiking trails, and access to great restaurants, because she doesn’t love cooking and dining out with friends, is her social scene. As you’re planning your career, figure out what businesses and opportunities exist in the area and start networking, she says.

Thinking of making a big move like Liz? The process can be overwhelming, but we’re here to help. Read on for Livability’s ultimate guide to choosing a new place, testing it out before you relocate, and feeling totally at home once you make a move:

Scouting Out a New City

With about 42 percent of the U.S. labor force now working from home on a full-time basis, more people than ever are asking themselves the question, “If you could work from anywhere, where would it be?”

Recognizing this new remote work landscape, companies have quickly evolved and grown to meet the needs of those who don’t want to be tethered to a year-long lease, yet want to immerse themselves in a new city, test running it before setting down more permanent roots.

Landing, for example, is a membership-based apartment leasing platform that doesn’t require long-term leases or deposits.  Members can rent furnished apartments across the United States, with the freedom to transfer properties with 30 days’ notice.

The company was founded in June 2019 but has seen tremendous growth in the last several months as it expands to several new cities. It’s currently available in 55 markets and counting. Landing has a presence in major metros like Chicago, New York City, San Francisco as well as mid-size and smaller cities, like Nashville, Pittsburgh, San Diego, Tulsa, Greenville and Milwaukee.

“Landing is a great option for people looking to explore a new city, whether for a month, a year, or just until they’re ready to settle down,” says Andrew Speyer, the company’s chief marketing officer.

There are also companies that will act as a concierge service as you test-run new cities. Take Jubel, for instance, which began as a company focused on experiential travel. But in March, as the pandemic swept the globe, the company realized that many of its clients have remote work opportunities and are also interested in exploring new places to live, explains Jubel co-founder Nicolas Bergengruen.

“We have partnerships with several short-term rental companies as well as co-working spaces that our customers can take advantage of as they explore a new setting,” he says.

Jubel customizes plans for those who are looking to get an immersive experience in a new city, taking into account individual lifestyle factors and budgets.

Fill out a survey that asks you questions about your preferences. Do you prefer a remote, urban or balanced setting? What kinds of lifestyles are you interested in – adventure, beach, culture, nature or nightlife? How long do you want to test run the city? What’s your budget range for accommodations? Then, you’ll be presented with a menu of enticing options, like a desert getaway that covers Phoenix and Sedona or one that splits time between Santa Fe and Big Sur.

Of course, some cities are also experimenting with virtual tours amid the pandemic. Columbia, SC has partnered with SkyNav. giving 360-degree virtual reality tours that take you down Main Street and let you experience the charming river walks.

Also, if you’re considering a new job or you’re transferring with your existing company, check in with your point of contact or the human resources department. Oftentimes, employers have a relocation incentive package that includes trips to the new city so you can go house-hunting or sightseeing, says Ryan Carrigan, co-founder of moveBuddha, which helps people plan a move online.

Where to Stay in the Short-Term

Got a few cities or regions in mind that you want to test out? You’ve got plenty of options for accommodations that will host you.

River Mountain in Everett, PA bills itself as the first-ever “work-play outpost,” offering retreats that allow you to stay in modern cabins, or a private room in the lodge, or go glamping. When it’s time to get some work done, you’ll have access to co-working spaces tailor-made for digital nomads and remote workers. Then, for fun, there are experiences, like stargazing, yoga classes, sunset toasts, hiking, evening bonfire with s’mores and more.

Marriott International recently launched a new “Work Anywhere with Marriott Bonvoy” program that gives guests access to packages at 2,000 hotels around the world. The program has three packages available: A Day Pass, with guest room access, high-speed WiFi and check-in as early as 6 a.m.; Stay Pass, all the benefits of the Day Pass, plus an overnight stay and check out as late as 6 p.m.; and a Play Pass, which allows you to work poolside and have access to a business concierge.

Home swaps are another option, with programs like Love Home Swap, a membership service that invites homeowners to “swap” places, allowing you to try out a new city and get a feel for what it’s like to be a resident. Or, for those in the academic community, SabbaticalHomes.com is a resource for home rentals, home exchanges, house sitting and house sharing opportunities.

How to Get a Pulse of a New City

Everyone has their own unique wish lists for amenities in a city when determining if a place will be a good fit in the long-term.

Networking in a New City

Co-working spaces can be a great place to meet your next employer, colleague, mentor, best friend. The person you enjoy bouncing ideas around with may just be the co-founder of a future company, as these spaces excel at fostering entrepreneurship.

If you’re new to co-working, or it’s been a while since you explored the idea, there’s been an evolution of co-working spaces, many of which will offer a free trial to test out their spaces. Some are tailored for certain industries, like Galvanize, which has co-working spaces in top tech cities and holds coding and data science boot camps on its campuses, in addition to a calendar filled with interesting workshops.  In Denver, Creative Density has a podcasting studio to rent in addition to desks and workspaces. And, in Tulsa, 36 Degrees North (36Â°N) is considered a basecamp for entrepreneurs, startups and innovators. Members represent nearly 50 different industries, and the co-working space hosts workshops, provides mentorship opportunities and events that help the city’s entrepreneurial ecosystem thrive.

In addition to co-working spaces, check in with your community’s chamber of commerce or economic development office to find out what opportunities exist for young professionals, business owners, or those ready to take the next step in their careers.

In Chattanooga, for instance, a group called “ChattaNewbies” brings young professionals together for happy hours, and also hosts events to help newcomers get acquainted with the city. In Montana, the Great Falls Friends and Neighbors is a program that brings residents together through social, cultural, civic and philanthropic activities.

How to Make Friends as an Adult

Prior to COVID, Brea Burkholz was living in Seattle and working in the cruise industry. With ships docked and cruise travel on pause, layoffs were imminent. Her lease was also about to come to an end. Burkholz began writing her next chapter. The setting she chose for it? Santa Barbara, CA.

“I fell in love with the city,” says Burkholz, who made her move in August and started her own public relations business. “I love that you get the Southern California sunshine, the beach and the mountains.”

As someone who has made several moves as a young adult, her best advice for getting familiar with a new city and getting to know new people is to volunteer. Not only will you meet fellow, civic-minded people, but the act will make you feel connected to your new home, says Burkholz, who is a part of the Junior League, which has chapters across the country. She also joined a group for women in communications.

Some other ideas? Try out Bumble BFF, which allows you to make platonic connections with people in your area. Or, if you’re not finding a MeetUp Group or Facebook Group that matches your interests, start your own, suggests Lori Cheek, an entrepreneur and creator of a dating app who moved from New York City to Kentucky and just launched a “Bluegrass Bikes and Brews” group on Facebook.

Single in the City?

If you’re single and looking to meet “the one,” you have a better shot at being lucky in love in some cities. Aim Cupid’s arrow at Minneapolis, Cincinnati, Pittsburgh, Atlanta, St. Paul, Boise and Columbus. These are among the top cities for dating, according to a study from Healthy Framework that considered several factors including how many people are single, the cost of dating, as well as dating amenities, like the number of entertainment venues, and dating safety.

As for meeting people, one of the best strategies is to focus less on meeting that special someone and focus more on meeting people in general, says Jason Lee, relationship science and data analyst with Healthy Framework.

“You’d be surprised how often getting involved in less dating-driven places can lead to new friends who turn around and introduce you to their friends, and possibly someone you might find special,” Lee says.

Great places to start–and this may depend on where your city stands with COVID cases–include volunteering, group fitness classes, interest clubs and Meetup groups, he says.

Want to ask someone out on a date, but don’t know where to take them?

“Stop by a local hotel in your new city,” Lee says. “The concierge or front-desk attendants spend all day offering recommendations to people visiting the city. Drop in for a few minutes and ask to pick their brains.”