Cities That Have Gained and Lost the Most Residents

According to a new study, these U.S. communities have seen the largest population losses and gains due to migration. 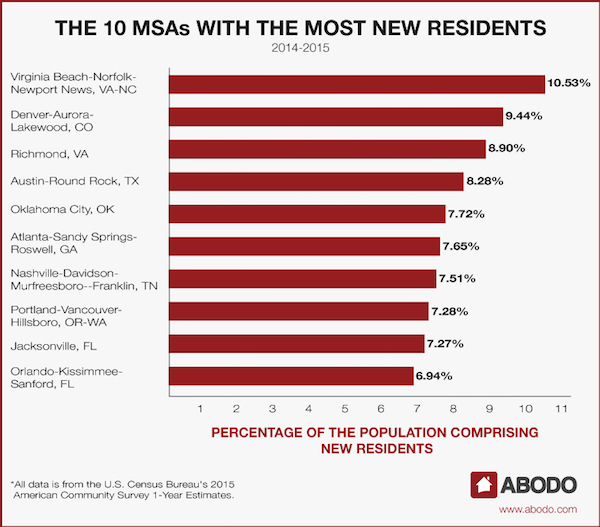 If you would have asked people at the end of the 20th century what U.S. cities are seeing a mass exodus, you might have heard a lot of Rust Belt towns like Detroit, Cleveland and Buffalo.

However, times have changed and some of the biggest cities in the country are seeing the biggest population losses due to migration, according to a new survey by the apartment search company ABODO.

“Our study shows that people are moving out of cities like Chicago, Philadelphia, New York and Boston faster than they’re moving in,” Sam Radbil, Sr. Communications Manager at ABODO recently told Livability. “Experts have pointed at the rapidly growing cost of housing, which has pushed a large number of residents out of major cities and has also prevented new people from moving into these large metro areas.

“Job opportunities are available and the economy is solid, but the housing costs are starting to become an extreme burden to residents and people hoping to move to major cities to start their next chapter in life,” Radbil added.

For the survey, ABODO researchers determined the 50 most populated urban areas from around the United States and examined domestic migration information for each one. Using US Census data, the researchers considered how many individuals moved from one of the 50 urban areas to a different county in the same state or a different state between July 2014 and July 2015. These numbers were then divided by 2014 population estimates to determine the percent of the population that left each city from 2014 to 2015.

The ABODO team also reviewed census data to see how many people moved into each of these cities between July 2014 and July 2015. Finally, the team calculated the amount of percent population change.

The results showed that while many big cities experience considerable year-to-year population churn, several large cities are seeing a significant net migration loss. From 2014 to 2015, Chicago, New York and Hartford, Conn. all saw the biggest greatest population loss due to net migration. The ABODO team then reviewed population data from 2012 to reveal that these same three urban areas had been experiencing a net migration loss for several years.

While cities like Detroit, Milwaukee and Cleveland are made the Top 10 on the migration loss list, these Rust Belt cities were also joined by Los Angeles, Memphis and Philadelphia.

The ABODO study also revealed several big gainers when it came to migration. Denver, Richmond, Virginia and Austin, Texas were among the cities that saw the most new residents between 2014 and 2015. However, these cities also saw a lot of churn, with significant outflows of population. ABODO said this could be because people are initially attracted to these major urban centers, but then seek less costly housing options outside of these cities.

“Reports have shown that the lack of affordable housing developments in larger metro areas is becoming a big issue,” Radfil said. “Without a huge number of housing options available for the lower and middle class within downtown areas, residents are choosing to leave the city altogether. Builders are developing less entry level apartments and homes than in previous years, with a focus on luxury developments, and this is starting to impact affordability for a large number of people across the nation.”