Skip to content
Home > Where to Live Now > Is There Such a Thing as a Best Place to Live for Everyone?

Is There Such a Thing as a Best Place to Live for Everyone?

A global survey found something surprising: the definition of a "best place" doesn't change much from Fargo to Tokyo. 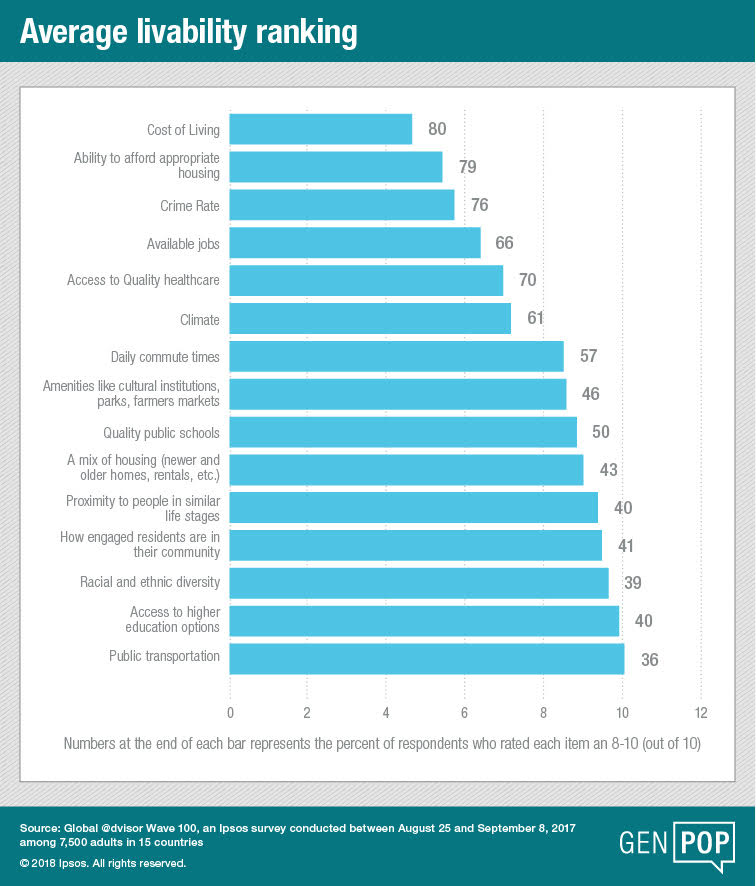 This article originally appeared on GenPop.

Where are the best places to live? Livability.com has been answering that question for more than five years through the research behind its annual Top 100 Best Places to Live ranking, which focuses on small to mid-sized U.S. cities. The current list, published in January 2018, shows Ann Arbor, Michigan, as the top city. And while Ann Arbor might not be the best place for everyone, newly released data shows that the specific qualities that make Ann Arbor a great place to live are fairly universal both across demographics in the U.S. and throughout the world.

Slate recently ran an article comparing several leading Best Places to Live rankings in the context of pointing out the pitfalls of recommendation algorithms in general. “Livability’s list makes perhaps the most earnest effort to weigh the things that real people — at least, some relatively affluent subset of real people — find appealing in cities,” wrote Slate’s senior technology writer Will Oremus.

“Actually, if you look at the data, that’s not really a fair or accurate criticism,” said Livability’s managing editor, Winona Dimeo-Ediger. “There’s very little difference across income levels in terms of what people consider important in choosing a place to live.”

The data she’s referring to is a survey Ipsos conducts each year as part of the back-end to Livability’s list. The survey asks people to rate and rank things like climate, crime rate, access to quality health care and schools and more.

For the site’s 2018 ranking, Ipsos expanded the reach of the survey and fielded it in 15 nations throughout the developed world.

Of course, not everyone can afford to live in all of the places on this or any ranking. Conversely, a community that is affluent isn’t automatically a great place to live. For some, these communities are attainable, for some they are aspirational. The data shows that overall, however, there’s consensus on what we aspire to both in the U.S. and throughout the developed world.

Livability.com is not unique in creating a Best Places to Live ranking but its approach is more rigorous than most and features a unique mix of qualitative and quantitative techniques. The quantitative portion consists of about 40 data points from a number of trusted public and private sources. Based on a methodology first developed in partnership with urbanist Richard Florida and his team at the University of Toronto’s Martin Prosperity Institute, the data is broken into eight categories measuring everything from housing, to the economy, to cultural amenities. The Ipsos survey adds in the qualitative dimension and is used to weight the quantitative data — so if Americans think cost of living is more important than climate, the cost of living data will weigh more heavily than the climate factors in the final ranking.

The duality of the rating and ranking is key. When asked to rate the items, even the lowest-rated item (access to public transportation) is rated an 8, 9 or 10 (out of ten) by more than a third of respondents. That indicates that all the items in the list are indeed important factors in quality of life or quality of place. Interestingly, while people across the income spectrum rank these items similarly, higher income Americans consistently rate each aspect higher than lower income Americans rate the same items.

When forced to rank those items, respondents (in a split sample from the raters) put them in an order that’s mostly consistent with the ratings but you begin to see some variation. Those variations in the data lead to a notion that you can “tier” what factors into livability and being a great place to live.

“You can draw some loose comparisons to Maslow’s hierarchy of needs,” said Kevin Stolarick, Provocateur, Research and Innovation at OCAD University in Toronto, who helped develop the original Livability ranking methodology. “Cities have to get the basics of health and well-being, including economic well-being, down in order to even be good places to live.”

The foundation of this hierarchical pyramid includes aspects such as affordable housing, low crime rates, available healthcare options and jobs. Moving up the tiers you find things that are slightly more important to some demographics than others. For instance, older Americans who might be retired and whose children have aged out of the schools are less concerned about quality public schools and commute times, which makes intuitive sense.

The upper tiers of the pyramid include factors like diversity, cultural amenities and public transportation options. While considered less important overall, these are the areas where cities begin to stand out and differentiate themselves both as places to live and as destinations for tourists and economic development.

“Those are areas where cities can move from good place to live to great places if they get them right,” added Stolarick.