Six Buildings Godzilla Should Stomp Out Next 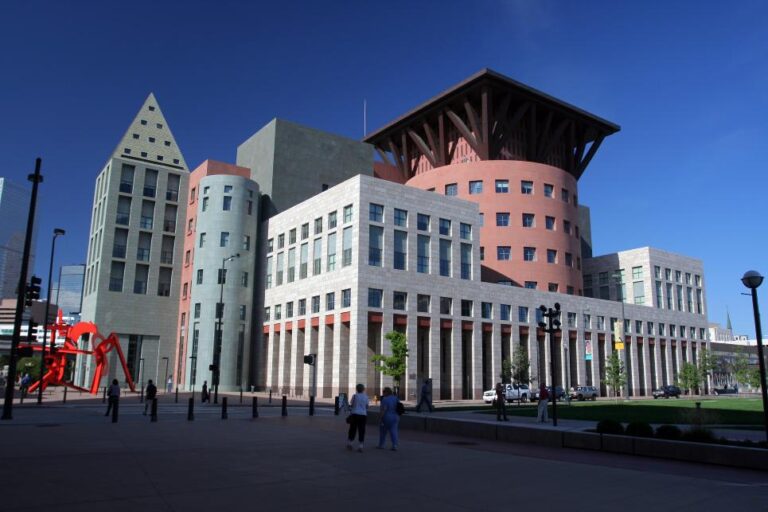 Godzilla has a habit of picking on big cities and over the years the giant monster has laid waste to some of the world's most notable buildings. In honor of the release of 2014’s summer blockbuster Godzilla, we thought we'd offer some suggestions of how the giant lizard could actually help the skylines in the U.S. With tongue in cheek we turned to architect and design junkie Joshua Prichard to put together this list of buildings Godzilla should stomp out next.

The Portland Building – Portland, OR

JP: It’s the height (which means the worst) of postmodern architecture – an era we are still having to apologize for. We’ll all be better off when that movement breathes its last.

We say: Opened in 1982, the building houses the municipal offices of the city of Portland. The National Register of Historic Places labeled it notable in 2011. And by notable, we think they mean “Good grief, what were they thinking?”

We say: From a distance the Kaden Tower looks like any other nondescript office building, but the closer you get, the more visually offensive the lacework façade gets. It’s like your grandma built a building-sized doily and hot glue-gunned it onto a giant corporate tower.

JP: The name is bad enough, but then you see an image and well….

We say: This multi-use shopping-slash-entertainment property that’s been under construction since 2004 sports an indoor ski-slope that is partly responsible for its…well, distinctive look. It’s so distinctive, in fact, that in 2008 acting New Jersey Governor Richard Codey was quoted in the New York Times saying that it was, “yucky-looking.”

JP: A "signature" architect [Frank O. Gehry] gets lazy and regurgitates musical instruments in the heart of Seattle.

We say: The EMP Museum houses the Experience Music Project and the Science Fiction Museum and Hall of Fame. Its sci-fi roots might explain its otherworldly look, but it doesn’t excuse it.

JP: First the building is just ridiculous, but let’s include it on this list mainly because it gives me great joy to picture Godzilla ripping into a giant picnic basket.

We say: This modern “marvel” has to be seen to be fully appreciated. The mental picture of Godzilla going Yogi Bear on this pick-a-nick basket of a building is a joy indeed.

JP: I hate to pick on Michael Graves, but he is the poster child for post modernism, so he deserves it.  It's hard to say why I don't like it without getting too archi-speaky, but it has bad colors, bad composition, bad scale, terrible fenestration, and it’s uninviting and uninspiring. And…LEGO-looking.

We say: It might be the most subtly-offensive building on this list, but Godzilla can have it.

Joshua Prichard has 15 years of architectural experience and is currently a Project Manager at Chasm + Fusion Architecture.