Skip to content
Home > Where to Live Now > The Best Treehouses Inspire Creativity, Connect with Nature

Top 8 coolest treehouses in the U.S. 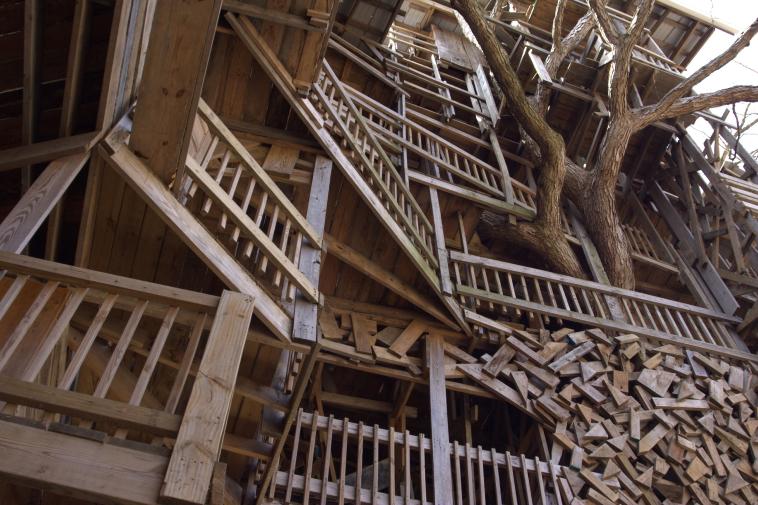 Treehouses have become the perfect way to pair luxury living with nature. People from all over the world want to create a retreat from the bustle of everyday life but with all the amenities of a traditional home. Treehouses have become so popular that Animal Planet’s hit series Treehouse Masters captivated 1.3 million viewers in 2013. Here’s our list of the top eight coolest treehouses in America:

Often touted as the largest treehouse in the world, The Minister’s Treehouse was designed and built by Horace Burgess, who was inspired by his Christian beliefs to build this “cathedral.” The 10-story structure measures 14,000 square feet and includes secret passages, swings and statues, and is almost made exclusively with recycled wood and materials.

Due to Portland’s hoppin’ music scene, it’s no surprise that this modern treehouse was built with music in mind. Architect Robert Harvey Oshatz built the house for his client who wanted the house to blend with nature and flow like music. The rounded beams and circular windows create waved designs throughout the home, which also features a wine cellar, dark room and meditation room.

Featured on HGTV, this 10,000-square-foot home is the work of architect Bart Prince. Instead of being built in a tree, the house was built around the environment with trees and landscape used as part of the interior. Multiple pods connected by a bridge wind through the home, and the bridge overlooks the 25-yard-long pool. There’s even an elevator/refrigerator that travels from floor to floor.

This one’s a cheat. Technically, no one can live in this abandoned house, but it had to make the list due to the intricate details and creepy factor. The three-story Victorian treehouse (nicknamed Honky Ranch Treehouse in 2008) features several bedrooms, a kitchen, vaulted ceilings and two outdoor staircases. The house has been deteriorating and vandalized, however when discussing cool treehouses, you simply can’t ignore its uniqueness.

Situated between three eucalyptus trees, this treehouse resembles the shape of a lantern, as the bottom half of the house lights up at night illuminating the forest around it. Designer Roderick Romero, who has built treehouses for celebrities including Sting and Val Kilmer, used 99 percent recycled materials to build the house.

Completely sustainable and recyclable, the O2 Treehouse’s geometric shape and materials allow it to sit among the trees – hanging from cables – without piercing or damaging them. What started as a college thesis for Dustin Feider has become a treehouse spotlighted on many best and coolest treehouse lists. What’s better, when you’re done with the house, you can take it down and put it in your recycling bin.

One of the more expensive houses on this list and others, this structure is an extension of the main home, only accessible by a cable bridge. Mostly used as an office and for entertaining guests and kids, the 16-square-foot octagon built by Anthony Wilder comes with Internet, a fireplace and sound system.

Built by Pete Nelson, known for treehouse building, this quaint house features something mighty: a full-scale steel bridge that helps support the 80,000-pound house. Even though this house was built for private residents, Nelson’s Treehouse Point in Issaquah, Wash., draws visitors who want to stay in one of his creations.