For wealthy people, suburbs are the new big cities. 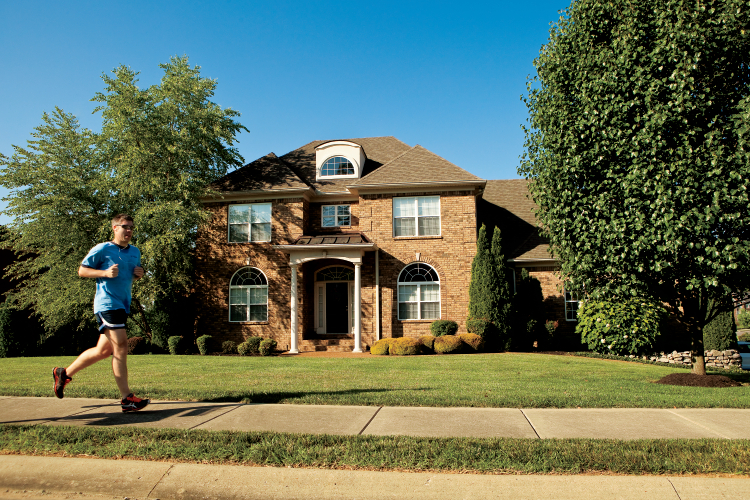 When you think of America’s wealthiest people, you probably picture them living in swanky penthouses with sweeping skyline views of some of the country’s biggest cities: New York. Los Angeles. Miami.

While this is certainly true for some of America’s high earners, a new study from The Center for Demographics and Policy at Chapman University hints that many of the country’s richest residents are choosing suburban life over the hustle and bustle of the big cities.

In examining the nation’s 53 largest metro areas, researchers found that a mere three percent of folks making more than $75,000 a year call these areas home. In the same vein, folks earning $200,000 or more are also forgoing urban life and flocking to smaller suburban counties.

In other words, that swanky apartment with a skyline view you were picturing? Swap it out for a big house on a quiet suburban street.

Why Is This Happening?

A national survey of 1,191 working professionals earning above $80,000 a year suggests that higher earners simply don’t prioritize the amenities that traditionally draw people to urban centers. In fact, only five percent of this group reported that they cared about the quality of or access to culture and nightlife in choosing where to live. Hip new restaurants or bars offering up craft cocktails are not at the top of this demographic’s must-have list.

Instead, their sights are set on the big picture and long-term goals: housing costs, commute times, job opportunities for their spouses and the quality of schools for their kids.

Where Are the 10 Best Small Towns in America? Click Here to Find Out

You may be thinking that commute times and job opportunities for a spouse aren’t necessarily compelling reasons to move to the suburbs, but the data supports this choice. In many of the nation’s largest metro areas, jobs within three miles of the city fell to just 22.9 percent of the total jobs in 2010. Meanwhile, the amount of jobs in the suburbs rose to 43.1 percent. As higher earners move to suburban areas, it seems, so do jobs.

As a suburb of San Jose, Santa Clara is a good example of this trend, where a whopping 21 percent of the population’s households earn $200,000 or more a year. Pockets of higher-earning professionals similarly pop up in suburbs of bigger cities like Boston, Washington D.C. and Philadelphia. Boston’s cost of living has skyrocketed to nearly 40 percent above the national average, with a homeownership rate of only 60 percent. High housing costs and a lack of supply make the suburbs that much more appealing as an alternative.

Nashville is another city where the area’s wealthiest are not choosing to live in the city’s rapidly multiplying high-rises. The majority of the growing city’s high earners reside in Belle Meade, Brentwood and Franklin — all suburbs. The city’s best schools are also located there, supporting the correlation that good schools attract high earners.

Located just south of Nashville, Williamson County has consistently ranked in the country’s top 10 wealthiest counties and has a median income of $104,367.

These Are Nashville’s Best Suburbs

Meanwhile, just outside of Salt Lake City, Utah County is also seeing this trend, as people are favoring the suburbs over bustling city life.

“More and more people are moving to the suburbs,” says Utah County Commissioner Bill Lee. “They have little pockets. Our cities are set up so that about every 15 miles there’s another city, and so we’re filling in.”

Lee also highlighted a unique trend that the county is seeing in wealthy residents who are relocating to the suburbs: people are investing in more house and less yard.

“The higher earners are also cutting down on their yard sizes, and it looks like they would now rather have a bigger house than a bigger yard,” he says. “That’s different from what we had in the past where you had a nice home, but the property was more valuable.”

For the wave of high earners leaving America’s cities, the grass is greener in the suburbs — even if there’s not a lot of it.