Skip to content
Home > TX > Denton > Where to Live Now > Why Denton, TX, Is a Best Place to Live

Why Denton, TX, Is a Best Place to Live

This fast-growing, progressive community is much more than a university town 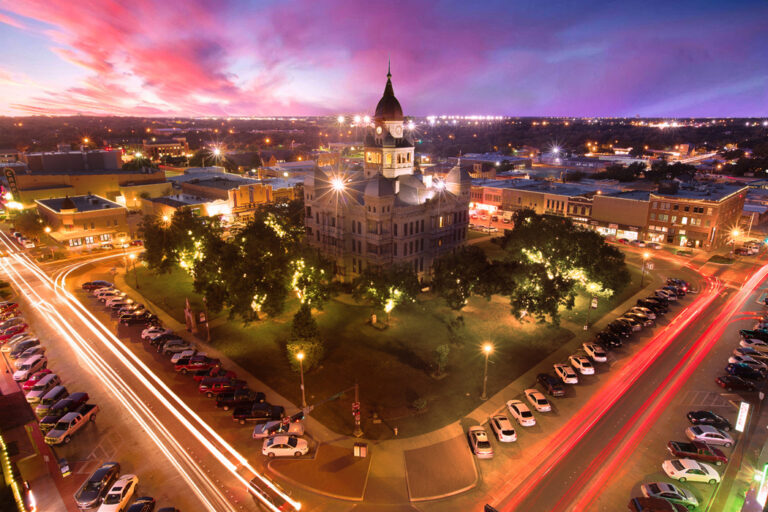 People in Denton, Texas, sometimes refer to their city as “little d,â€ in contrast to nearby Big D, Dallas. But there’s nothing small about this booming north Texas city.

An integral part of the Dallas-Fort Worth metroplex, one of the fastest-growing areas of the country, Denton enjoys all the benefits that come with life in a big-city region, but also retains the charm, convenience and amiability of a smaller university town.

As a college community – both the University of North Texas and Texas Woman’s University are located here – Denton also has earned a reputation as a progressive-thinking, diverse and culturally vibrant center that increasingly attracts young entrepreneurs, techies, and creative-class workers.

“In business, you see today that location is not so dependent specifically on what a person’s profession is. People look for the place they want to live and work, and they move there,â€ says Denton City Manager George Campbell. “We want to be a place for the creative thinkers, technology, people who want to get started, get their feet on the ground and get their businesses started.”

Denton ranked high for its housing, which is available, varied and affordable, though Campbell says, “we sometimes get criticized because we don’t have a lot of high-end executive housing.”

Demographics were another plus in Denton’s livability rating. In a city where students account for more than 50,000 people (in addition to the city’s 120,000 non-students), diversity is a pleasant fact of life, reflected in the city’s restaurants, cultural sites, neighborhoods and celebrated music scene.

The site of most of its public celebrations and one of the city’s major amenities, is 32-acre Quakertown Park, which sits behind the Civic Center and contains a 31,000-square-foot event center, an amphitheater, picnic tables, playgrounds, a pool and more.

Another treasured amenity is Denton’s historic downtown area, a nationally recognized Main Street, and a favorite with residents and visitors alike, full of shopping, arts, dining and people-watching.

“We have created a major corridor downtown that has been rejuvenated and revitalized, with entertainment venues, a lot of nightlife and pedestrian activity in our downtown – that is a little bit unusual for a city our size,â€ Campbell says. “Downtown is busy any night of the week, and not just with students. A lot of people who have lived here a long time support that downtown music area, and it’s become an attraction too for people out of the area.”

The city maintains a vigorous economic development program, bolstered by its bustling general aviation airport – less than 10 miles from DFW International Airport – and, soon, by a new business incubator. One of Denton’s most remarkable amenities is a first-class public transportation system, a standout for a city its size. It includes citywide state-of-the-art buses that connect to light rail, which in turn, speedily connects to Dallas public transport, making the trip from little d to Big D an easy ride.

We want to be a place for the creative thinkers, technology, people who want to get started, get their feet on the ground and get their businesses started.