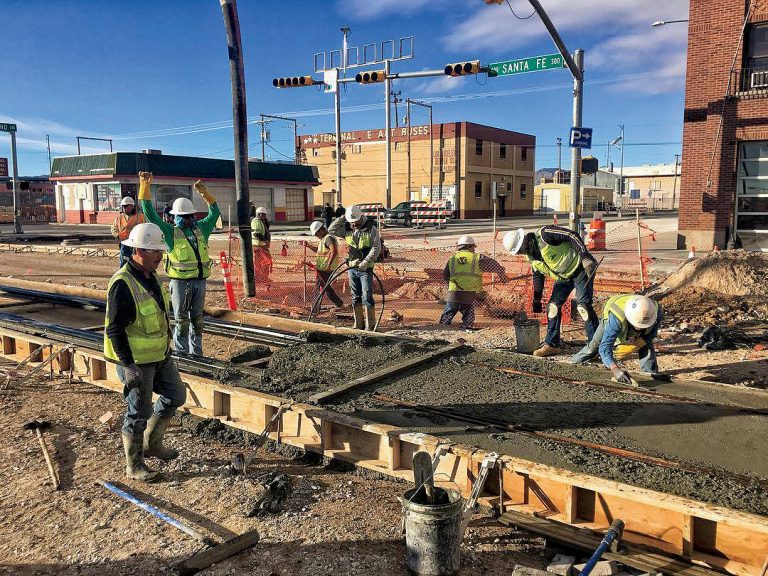 Two transportation projects are putting El Paso in the fast lane to improving mobility within the city limits.

The El Paso Streetcar Project is an initiative to introduce daily streetcar transit ridership along a 4.8-mile route stretching from south El Paso to the core of downtown El Paso and up to the University of Texas El Paso and the Kern Place area. Meanwhile, a GO 10 project features infrastructure reconstruction along a 5.75-mile corridor of Interstate 10 on El Paso’s west side between the Executive Center Boulevard and North Mesa Street exits.

“The mission of the streetcar construction effort is to link and move people along the most vibrant destinations in the El Paso community, with many stops along the way,” says Martin Bartlett, El Paso Streetcar Project spokesperson. “For example, you’ll be able to take the streetcar after dinner downtown and then go to a UTEP basketball game, or have dinner in the Kern Place neighborhood and then hop on a streetcar and take it to a baseball game at Southwest University Park. Those are just two of numerous examples.”

The project will cost $97 million paid primarily with state funding, and officials aren’t willing to give a firm date when the streetcars can be ridden by the public. Their best estimates are late 2018 or early 2019.

“Much of the infrastructure and tracks are already in place, but a lengthy phase of mandated testing must occur so the City of El Paso knows that everything will be entirely safe for ridership,” Bartlett says. “The city is also working on several bus transit lines that will come online over the next several years. Things are really moving forward here in El Paso.”

Discover the City on the Rise: El Paso, TX

“Two key factors of GO 10 are the rebuilding of 29 bridges and the addition of collector-distributor (CD) lanes throughout the corridor,” says Jennifer Wright, public affairs officer with the Texas Department of Transportation El Paso District. “CD lanes will allow motorists who enter and exit I-10 to use those lanes, while commuters who want to pass nonstop through the corridor will use the I-10 main lanes.”

GO 10 has funding from both the state and federal governments, and part of the funding was made possible from El Paso County’s 2014 $10 increase in vehicle registration fees.

“We will continue to keep El Paso motorists moving as best as possible along I-10 during the entire construction phase,” Wright says. “This is an excellent project to make travel safer and much more efficient, and emergency responders will have more room to manage incidents.”

Experience the Hub for Human Innovation in El Paso, TX