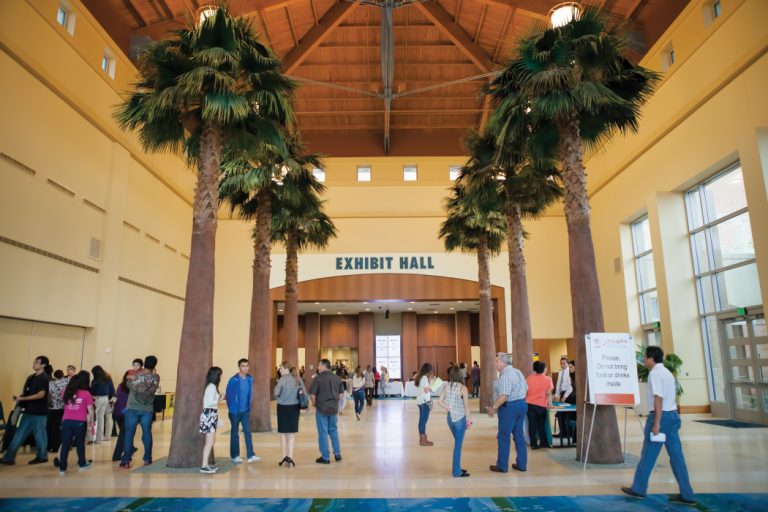 The convention will come to order – in McAllen.

Five new hotels in the immediate vicinity of the McAllen Convention Center are impacting the facility’s ability to draw larger conventions. It’s an exciting time for officials with the center, which is celebrating its 10th anniversary in 2017.

“During our first eight years, there were no hotels nearby, and now we’ll have five,” says Omar Rodriguez, director of the McAllen Convention Center. “It’s amazing how everything has developed.”

McAllen, one of the fastest-growing cities in Texas, has its convention center conveniently located near McAllen International Airport, numerous restaurants, Palms Crossing and Shops at 29 retail developments, and South Texas College.

“In addition, a new McAllen Performing Arts Center with 1,800 seats opened nearby in the fall of 2016 to bring nationally recognized productions of music, dance and theater to our residents and visitors,” Rodriguez says. “What is especially nice about all this development is that many attractions are within walking distance from the convention center.”

How Technology is Preparing Students in McAllen, TX

The first hotel to open in the convention district was La Quinta Inn & Suites, which debuted in 2016 and is only 75 yards from the center. The 114-room hotel has already hosted conventioneers who attended South Texas Comic Con, a Texas Workforce Conference, Firefighters’ & Fire Marshals’ Association of Texas Convention, and the Episcopal Diocese of West Texas Conference.

“We shuttle any of our guests to anywhere they want to go within a 5-mile radius of the hotel, and a lot of attractions are within that 5-mile radius,” says Juan Aldape, general manager of La Quinta Inn & Suites-McAllen Convention Center. “The staffs of the McAllen chamber and the McAllen CVB have worked hard to bring conventions and progress to the city, and this entire development should be the start of many good things to come.”

“The convention center is in the middle of a lot that is happening in South Texas, helping our community enjoy a big-city feel without the big-city problems,” Rodriguez says. “When all five hotels are open, there will be almost 600 rooms within walking distance of the center. The hotels were the last component needed to make McAllen a true destination for local, statewide, regional, national and international guests.”

Rodriguez points out that convention tourism benefits all residents of McAllen. For example, a 2-percent hotel occupancy venue tax increase has raised much money for retail and entertainment amenities, including the new $42 million McAllen Performing Arts Center, whose thousands of visitors will spend money throughout the community.

“As for the center itself, besides conventions we market ourselves for trade shows, consumer shows, graduations and more,” he says. “Meanwhile, the city is looking to attract more companies to locate to McAllen in the agriculture, education, health-care and technology sectors, and that activity will eventually bring even more people to our hotels, attractions and convention center events.”

Rodriguez adds that the center, which is only 5 miles from the U.S.-Mexico border, hopes to host conventions for Mexican companies and organizations as well.

“There is a lot of information-sharing with Mexico these days, and McAllen is a beautiful city for anyone to visit,” he says. “Today, I believe there is no better place than McAllen to host a convention, thanks to the center, the airport, restaurants, shopping, entertainment and the ease of walkability to get to all those places.”