McAllen, TX Businessman and Sculptor Practices the Art of Giving Back 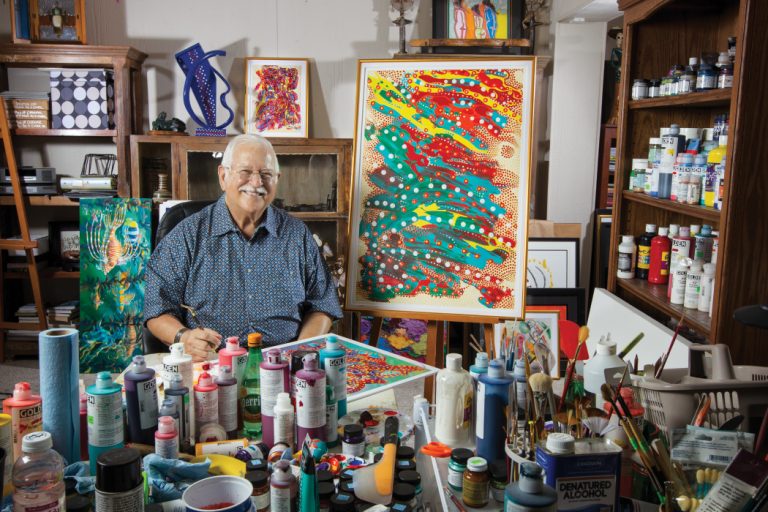 From the Valley Symphony Orchestra & Chorale and the University of Texas Rio Grande Valley Theatre to the Museum of South Texas History and the International Museum of Art & Science, McAllen’s vibrant arts and cultural scene rivals that of many larger urban centers. New residents should know that a major reason for the city’s thriving arts scene is the generosity of businessman Kirk Clark. Clark owns one of the Valley’s largest and most successful car dealerships, Clark Chevrolet, and is himself a noted sculptor and painter.

A Heart for Art

Clark began his art career at the age of 10, when he entered and won his first juried art show during the Mission Citrus Fiesta. The young Clark also walked away with a $400 commission for his work from a woman who “insisted on buying my painting,” he says.

“A woman came up to me after the award and asked to buy my painting. I told her it was not for sale because it was my first painting, but then she pulled out four $100 bills. I grabbed that money so fast. That was the first time I knew I was going to be a car dealer,” he says with a chuckle. “That’s when I figured out I could be an artist and be a businessman too.”

Indeed, both art and business are in Clark’s blood. His parents, the late Charles and Dorothy Clark, founded the Clark dealership and were founding members of McAllen’s International Museum of Art & Science (IMAS), which features exhibits that educate visitors about the relationship between art and the sciences.

The late Clarks were also avid art collectors, and Clark says his formative art education came from traveling with them to museums and galleries around the country.

“Both my parents were avid collectors and researchers and had been artists themselves. They collected more than 30,000 works and also gifted more than 30,000 pieces of art to 34 museums, colleges and universities around the country, which I thought was absolutely amazing,” Clarks says. “Part of my experience as a child and as an artist was traveling with them to the different galleries and museums and meeting the different curators, so I grew up at an early age experiencing art and being inspired by it.”

A Legacy of Benevolence

Clark says he was also inspired by his parents’ philanthropic spirit.

“They set such a marvelous example. I asked my dad one time, ‘Dad, you’ve donated some of the most beautiful art I’ve seen in my life, don’t you feel bad about giving some of this up?’ He said, ‘You know, I’ve been so blessed in my life. I don’t feel like I own this art. It’s not for me to own and control; it’s for me to share and to help people recognize its beauty and its value. It’s for me to take something that’s good and really make it great in the viewer’s eyes.’ That really inspired me, and it has continued to inspire me,” he says.

Through his own philanthropy, Clark, 70, has helped fund renovations to the International Museum of Art & Science and has donated proceeds from the sale of his art to charities both in McAllen and abroad, such as Trinity Episcopal Church and health and social organizations in Cuidad Victoria, Mexico. He has donated art work to several schools and community organizations, including the La Joya school district’s John F. Kennedy Elementary School. Clark also helped renovate gallery space at the South Texas Community College Art Gallery and gave the college a scholarship for students to study art.

“Kirk Clark has been a pivotal element in continuing the legacy of philanthropy established by his parents, Charles and Dorothy Clark. For many years, the Clark Family has been a major supporter of IMAS. In addition to Kirk Clark’s financial support, his artistic talent and advocacy for the arts and sciences has led to an extensive contribution of exceptional works of art to IMAS for display and fundraising purposes,” says Alma Ortega Johnson, former vice president of the IMAS board of directors. “In turn, the museum has the privilege of displaying his artwork, and the works of many great artists in a gallery space that prominently and gratefully carries his name.”