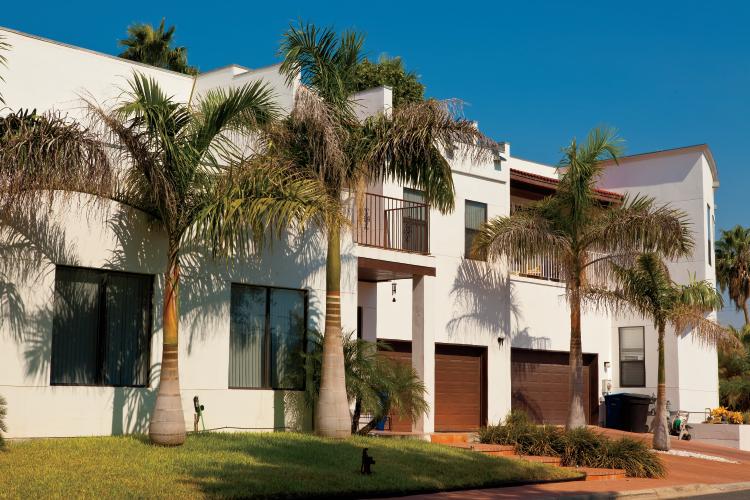 It’s always a good day in the neighborhood when you live in one of McAllen’s most uncommon subdivisions. We introduce you to Water Walk, the creation of a Hollywood filmmaker.

Known as Water Walk, the 10-acre housing development was created by Catherine Hardwicke, who has directed a variety of famous films such as 2011’s Red Riding Hood, 2008’s Twilight and 2005’s Lords of Dogtown. She designed the neighborhood during her time as an architecture student at The University of Texas at Austin in 1979, and turned it in as an assignment for a class project.

Her work didn’t only impress her professor. Her father, John B. Hardwicke Jr., thought enough of the design that he and fellow developer Tommy J. Daniel made the first phase of Catherine’s development come to life.

“Water Walk was a cotton field,” says Mike Blum, who was McAllen’s city planner when the housing project began and now lives in the development. “Now, it’s a uniquely master-planned environment that’s unlike any place in the region.”

Comprising more than 120 Mediterranean-style townhomes, Water Walk includes a one-acre lake with fountains and a waterfall, as well as tennis courts, sitting areas, swimming pools and other amenities. While each home is unique, they are all finished with white stucco and have red tile roofs.

“Words cannot do it justice,” says Elvie Davis, who serves as secretary of the Water Walk Board of Directors and is a resident of the development.

“It [Water Walk] was an instant legend, the desirable place to live, the new cool neighborhood,” Davis says. “I recall driving by and looking at this phenomenal place, and fantasizing about living here.”

After her husband served on the development’s board of directors for two years, she was eager to participate and was elected to serve in 2010. She also decided to create Water Walk’s website, which she continues to manage and maintain.

Davis says she enjoys the neighborhood’s “zen-like ambiance,” an aspect that appeals to many residents, but Water Walk is also located near north McAllen’s thriving shopping, business and entertainment districts.

In addition to unique homes, a lush atmosphere and a convenient location, Water Walk residents can enjoy a feeling of safety and security inside the development.

“Everybody kind of watches out for one another,” Blum says. “It’s not gated, but it is a secure environment.”

Why McAllen, TX is a Livable City

Once only an idea on paper, Catherine Hardwicke’s college masterpiece is now one of McAllen’s most popular neighborhoods that continues to draw the attention of area residents and visitors alike.

“It’s like a work of art that’s also a residential haven for those of us living here,” Davis says. “It’s a creative design brought to life by a young artist and her family, born and raised here, and a source of pride for the city.”