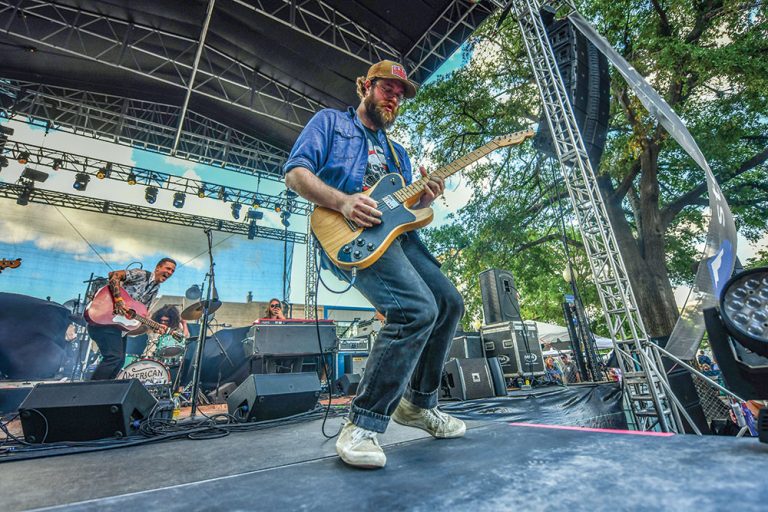 Tyler has been long known as the Rose Capital of America, and what’s blooming just as beautifully these days is a live music scene. A diversified lineup of talent showcasing country, rock, jazz, indie, blues, classical and more offers both locals and visitors more fun than you can stuff inside a 10-gallon cowboy hat in venues scattered throughout the city, from festivals to theaters and breweries to restaurants. So grab your boots and scoot across this east Texas town to discover what’s out there to enjoy.

Less than a decade old, the Red Dirt BBQ & Music Festival explodes with excitement in the heart of downtown each May. For the past six years, a perfect storm of bands, brews and barbecue takes to the historic brick streets “drawing people from across Texas, more than 20 other states and Europe,â€ says Chase Colston, event director. “The festival has sold out every year. During our first year, we sold 4,000 tickets, and in 2019 and 2020, we sold out (5,500 tickets each year) in about three hours.”

The one-day, highly anticipated event is not a barbecue competition. All guests, unless they have bought a concert-only ticket, get to taste a sampling of smoked meats like ribs, brisket, pork butts and more from about 30 barbecue joints scattered across the Lone Star State, from Amarillo to Houston. There’s live entertainment from two stages featuring local talent along with the best of Red Dirt bands that play a long-loved, traditional style of dusty backroads music that is strong on songwriting, shuns overproduced commercial sounds and can be defined as “country music meets Southern rock meets Americana,â€ says Carleen Dark, market president for Townsquare Media, the company that produces the event.

Sip Your Way Across East Texas

“There is really nothing like it. We are insanely focused on a top-quality guest experience,â€ Dark says.

Chase Colston attributes much of the festival’s growth to strong local support, saying Tyler, specifically its downtown leaders, have been the event’s “No. 1 cheerleader from the very beginning.”

The appreciation is mutual as Red Dirt has charitable partnerships with The Heart of Tyler Inc., dedicated to the revitalization of downtown, and Boot Campaign, whose programs help veterans and their families bridge the divide between military and civilian life.

“Even more, the festival brings exposure to our rich, historic downtown and encourages support of our arts and live music in Tyler,â€ says Visit Tyler President Shari Lee.

In 2019, organizers threw a Lineup Reveal Party at True Vine Brewing Company that drew almost 1,000 people. Because of the concerns over COVID-19, the Red Dirt BBQ & Music Fest has been rescheduled for October 11, 2020, at the time of this writing, so check their website for the most up-to-date info: reddirtbbqfest.com.

Both True Vine Brewing Company and ETX Brewing Company offer locations that are friendly for family outings – and that means children and fur babies – and offer craft beer and musicians on weekends, ranging from jazz to rock-a-billy.

Two longtime downtown favorites, Rick’s on the Square (look for the iconic neon Tyler sign on the side of the building) and the legendary Stanley’s Famous Pit Bar-B-Q, which first opened in 1958, both are known for their outstanding menus and in-demand mix of popular bands.

By providing an auditorium setting, the UT Tyler Cowan Center provides a broad spectrum of shows, from the East Texas Symphony to Martina McBride, and Liberty Hall, a restored, 1930 art deco theater downtown, brings musicals and intimate evenings of entertainment with artists like three-time Grammy nominated blues and folk stylist Ruthie Foster. Treat your palate and ears at FRESH by Brookshire’s, a gourmet market, where music is live on the patio during the summer. And for an upscale diner with live entertainment to cap your evening, don’t miss Dakotas and Lago del Pino.

For more places to hear the sounds of the town, download the EGuide Tyler TX app for free at eguidemagazine.com.