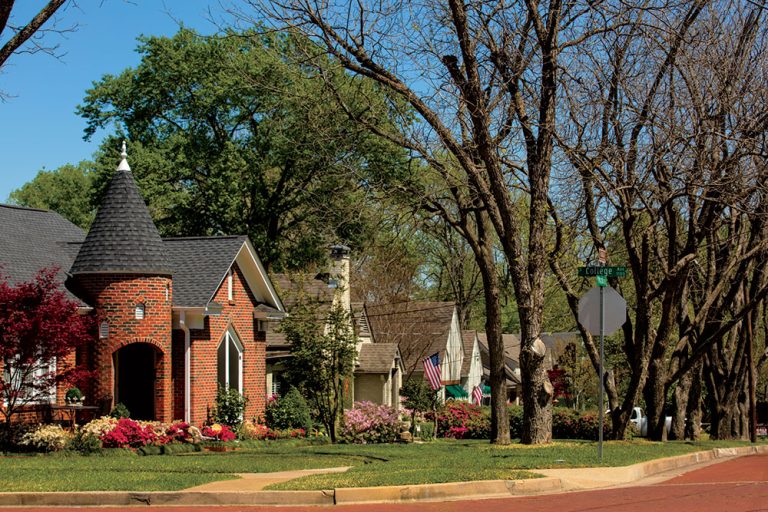 With six distinct historic districts – seven if you count the newer “overlayâ€ that preserves the neighborhood as a whole – Tyler has no shortage of architecturally diverse homes that echo the city’s notable past. Some originally housed working-class folks, while others grew into extravagant landmarks occupied by wealthy merchants, physicians and former Civil War leaders.

The largest National Register District in Tyler, the Azalea District is known, not surprisingly, for its gorgeous flowering namesake. Mass plantings of azaleas, which grow well in the acidic soil of East Texas, sprawl throughout the district in every type, size and color imaginable. Most of the homes here, including the impressive, 6,300-square-foot Spence-Bertram House, were built in the early 1900s in styles ranging from Colonial and Tudor to French Eclectic and Renaissance Revival.

One of the most well-known creations of famed Tyler architect Shirley Simon, Sr., the Colonial Revival Spence-Bertram House boasts 11 rooms (not counting five half and full baths), a Waterford crystal chandelier in the dining room and Simon’s signature circular windows. Vivid azaleas, from miniatures to Encores that bloom twice a year, frame this distinctive home.

Just south of downtown, the eclectic collection of Queen Anne, Colonial, Classical Revival and Craftsman homes in the Brick Streets District dates back to the mid-1800s, with many constructed during the East Texas oil boom of the early 20th century. Brick-paved streets – this area is home to the city’s first paved streets, period – lend an authentic feel.

The Douglas-Holland-Pollard House, erected around 1873 for Tyler’s first fire chief, anchors the neighborhood with 10 rooms, a large entry hall with original staircase and bannister, and stunning Victorian flourishes like gingerbread woodwork, fish scale finishes and one of the city’s few mansard roofs. Another cool distinction: a hitching ring for horse-drawn vehicles is still embedded in the curb.

The city’s first historic district, Charnwood was known in the 19th century as South Tyler and still contains one of the largest concentrations of older, diverse and well-preserved properties atop a gently sloping hill not far from the Smith County Courthouse. Although the L-shaped neighborhood first attracted middle- and working class families, it soon became a prominent spot for the Tyler business elite.

A “Texas interpretationâ€ of Frank Lloyd Wright’s prairie-style architecture with Italianate influences, the striking Connally-Musselman House was built in 1908 by a prominent Confederate surgeon. The red-tile-roofed dwelling sports the original cast iron fence, 11 rooms (plus a full attic and basement) and no fewer than seven fireplace mantels, including a Craftsman-style beauty with a large copper hood in the receiving hall.

Meanwhile, three of Tyler’s official historic districts depict the life of the city’s residents who lived within more modest means and are best known for their big-picture perspective, with few architectural stars clamoring for attention.

Named for the multi-family dwellings that cropped up in the area to accommodate the growing need for housing, Donnybrook Duplex in south central Tyler became a haven for servicemen returning from World War II in the late 1940s. Eighteen Colonial Revival, wood-framed duplexes, which were rare when local estate developer R.J. Henderson built them for the veterans, have been modified to look like ranch-style, single family homes with buff or red brick detailing.

Three blocks from the courthouse square, the East Ferguson District is made up of six modest, one-story Craftsmen bungalows built between 1926 and 1930 on one large shared parcel of land. At the time, such “rowâ€ type housing for working-class families – the homes are nearly identical – was pretty uncommon. After World War II, the properties were offered for sale to the renters who’d lived there for years.

Bumping up against the northwest corner of downtown Tyler, the Short-Line District showcases 11 Craftsman style bungalows built in the 1930s as rental units for a growing population of African-American workers. As with the East Ferguson homes, longtime renters were encouraged to buy them when World War II ended. The homes here are considered to be the best-preserved in the area.