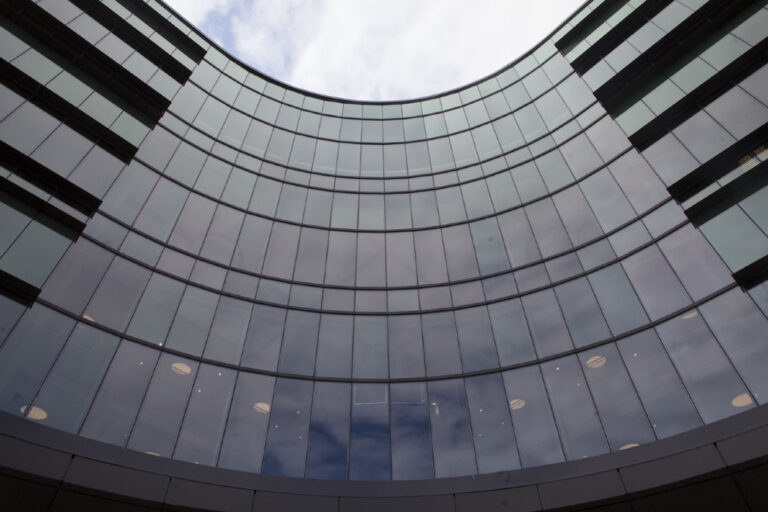 Abingdon-based supermarket giant K-VA-T Food Stores stepped up to the table in 2012-2013 and constructed a new headquarters building.

K-VA-T (pronounced K-Vat) has been in Abingdon since 1955. Its name is derived from the three states – Kentucky, Virginia and Tennessee – where its 105 supermarkets operate, primarily under the Food City name. The company also owns Super Dollar Discount Foods stores.

In summer 2011, Johnston Memorial Hospital moved from its old facility in downtown Abingdon into a new building. The former hospital property was purchased by K-VA-T, and company officials decided the structure should be demolished in favor of a new corporate headquarters building for their expanding company.

“We are one and a half blocks from the Washington County Courthouse and in the middle of a residential district, so we made sure the building would be eye-pleasing to our neighbors without being obtrusive,” says Steven C. Smith, K-VA-T president and CEO.

Amenities of the four-story structure include a full conference center that can accommodate large dinner functions and manager meetings and college-size instructional rooms with video conferencing capabilities to communicate with store associates. Food City products can be test-marketed at an on-site cafe and full kitchen before distribution to their stores.

More than 350 employees work at the headquarters building, and another 600 work at the company’s 1-million-square-foot distribution center in Abingdon off Interstate 81 at exit 22.

“K-VA-T is also an ESOP company, an acronym for Employee Stock Ownership Plan, with about 14 percent of the company owned by our associates,” Smith says. “More than 8,000 of our overall 13,000 employees are stockholders under the profit-sharing plan, and that number would be even higher except that an employee can’t participate in the stock plan until they’re 21, so teenagers and 20-year-olds working in our stores aren’t eligible yet.”

Henry Snodgrass, chairman of the Washington County Industrial Development Authority, says K-VA-T is an important corporate player in the community for a variety of reasons.

“They have many employees and plenty of visibility with their stores throughout the region, and it’s nice to say that we have a corporate headquarters here in Washington County,” Snodgrass says. “K-VA-T also made a great effort to make their building look attractive, and it’s an asset when I bring businesses into the county who are prospects and interested in us. One of the attractions I take them to see is the K-VA-T headquarters building.”