Retail entrepreneurs are transforming the area into a hip, exciting shopping and dining destination. 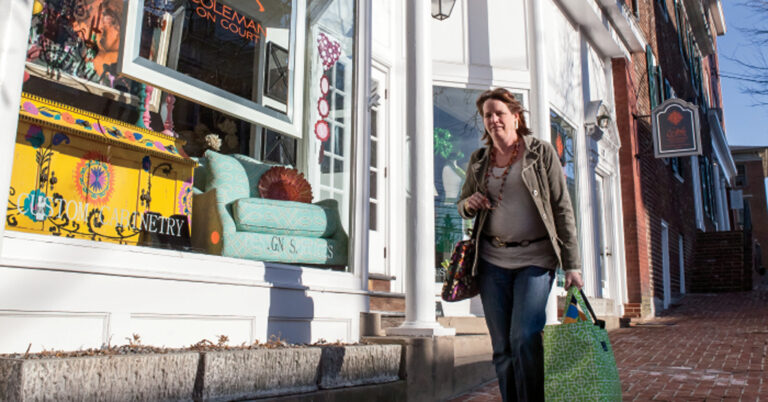 Abingdon’s Courthouse Hill neighborhood at the intersection of East Main and Court streets looks a lot different now than it did just two years ago. Once comprising mostly vacant buildings and clerical space, the downtown area experienced a retail renaissance during 2013 that transformed it into one of Washington County’s trendiest shopping destinations.

“This was rather a dead area with several empty buildings, but now this block has become almost totally retail,” says Duke Kegley, who moved his longstanding men’s clothing store, Kegley & Co., to a Main Street storefront across from the Washington County Courthouse in September 2013. “Everybody wanted to make a positive change. There’s a lot of traffic here now because the retailers feed off one another. The merchants have a unique bond – we’ve done group advertising together and we’re planning to do events together.”

“I saw a lot of potential in this area. So much is going on here, and more tourists are coming to the area,” Noonkester says. “The owners of our building are putting in four loft apartments above my store, and there’s definitely a lot of foot traffic here.”

With new residential offerings and a growing collection of shops and restaurants, Courthouse Hill has evolved into what many new residents want – a mixed-use community where entertainment options are just down the street from work spaces and homes.

“I love to shop and eat out, and it’s great that I can do that throughout our Main Street now,” says Susan Howard, executive director of Abingdon Main Street. “I wish Abingdon Main Street could take credit for the Courthouse Hill transformation, but it really is about the entrepreneurs and the town itself. Abingdon is a beautiful, historic place with a great quality of life. People love living here and visiting our amenities like the Virginia Creeper Trail and the Barter Theatre. That’s why creative and energetic entrepreneurs have taken advantage of these storefront opportunities.”

“It’s important for people to shop local. We can order whatever they need,” Noonkester says. “Abingdon residents don’t have to drive far to find nice things.”

Kegley has been outfitting Washington County men with formal wear, sportswear and business attire for 30 years, and has developed lasting friendships in the process.

“This area has been super-supportive. We provide personalized service, and folks enjoy having access to fine clothing here,” Kegley says. “I’ve gotten to know many families and their children, who later come to us for clothing before they go off to college and for interview suits when they’re looking for jobs.”

Howard says the renaissance of Courthouse Hill is one sign that the economic recession is turning around.

“We have seen lots of business growth in recent years, and we anticipate this trend will continue,” she says. “I’m passionate about Abingdon. It’s the greatest place on earth to live.”