The Barter Theatre in Abingdon, VA has been entertaining audiences for more than 75 years. 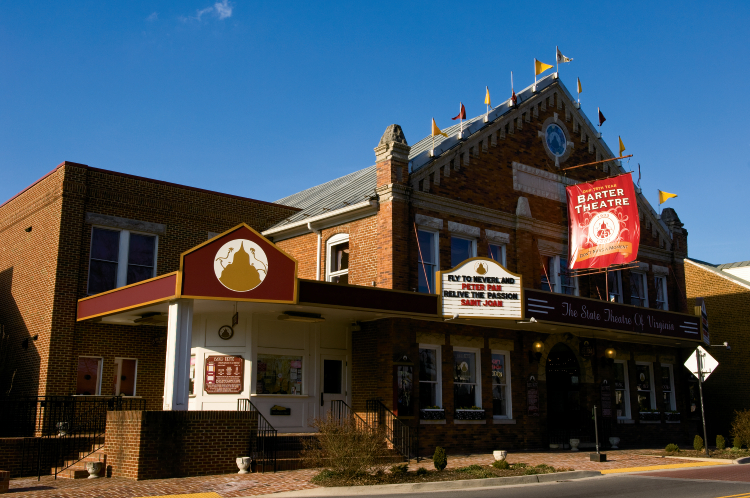 Rich in historical significance and with an enduring cultural impact, the Barter Theatre in Abingdon has been entertaining audiences for more than 75 years.

Begun as a kind of entertainment-for-food swap meet during the Great Depression, the aptly named Barter would accept cash or produce for admission. The first stage sat atop the town jail and there were plenty of naysayers, but founder Robert Porterfield was able to make a success of the theater. That first year, in 1933, the Barter Company cleared $4.35. (In a nod to its roots, the Barter accepts donations for area food banks in lieu of admission at least once a year.)

Named The State Theatre of Virginia in 1946, the Barter has featured the talents of actors who later became Hollywood and Broadway stars, including Gregory Peck, Patricia Neal, Kevin Spacey and dozens of others. The success of the Barter is tied to its commitment to setting the standard high in terms of actors and material. Today’s resident actors are paid professionals with impressive resumes, training and talent.

In addition to its actors, the Barter employs creative minds that work behind the scenes to ensure the show goes on. Richard Rose, who serves as the theater’s artistic director, has directed, choreographed, designed and/or written more than 135 productions at the Barter.

The Barter itself is worthy of the talent on its stage. The 507-seat theater, built in 1831 as a church and deeded to the city in 1890, now is the hub of an eight-building campus that includes the Barter Theatre Stage II, an 1829 church building renovated to become a 167-seat venue. The Barter features authentic furnishings from the Empire Theatre in New York, a historic building that Porterfield was given one weekend to loot before its destruction.

Continuing to expand in every direction, the Barter reaches beyond the stage and into the region’s classrooms through educational workshops and programs that supplement school curriculum. In addition to bringing students into the theater for performances and taking plays into area schools, the Barter Theatre invites children behind the scenes to learn about all aspects of the art form.

When they visit, students can tour the historic theater and campus, which includes the Barter Inn where some of the actors live, the production building where costumes and props are created and the scene shop where stage sets are built. The Barter also offers extracurricular acting classes for various age groups in the spring and fall, and holds day camps in the summer. One- and two-week intensive musical theater workshops are also part of its summer programming.

“One of our core missions is to provide arts education and theater experience in and out of the schools,” says Courtney Bledsoe, associate director of marketing for the Barter Theatre. “There are opportunities for individual children to audition for and appear in our professional productions. Those kids are treated like professional actors. It’s a great opportunity for kids interested in theater and helps them get into college programs.”

Check out more on the arts in Abingdon, VA.