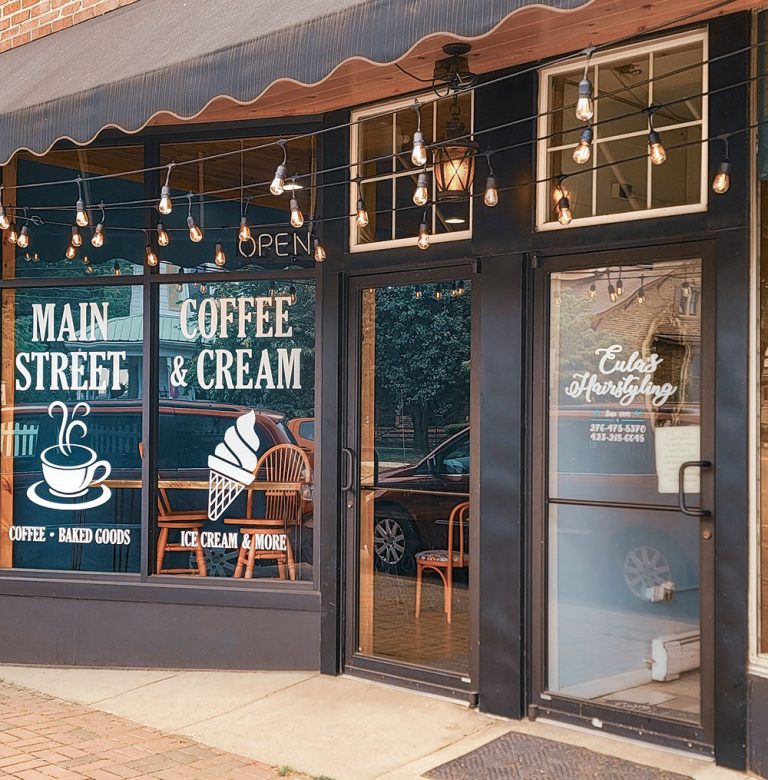 Ralph Wilson, a resident of Damascus, is what one would call a true entrepreneur. Why, might you ask? Ralph, along with his wife, Patti, opened his third commercial venture in Washington County in 2021, Main Street Coffee & Cream.

Even though its doors just opened in July, the coffee shop is already a local favorite, as are Ralph and Patti’s other businesses: Dragonfly Inn, a bed-and-breakfast that opened in 2017, and Damascus Diner, which made its debut about a year later.

“We will certainly stay busy with what we already have.”

“Other than during the several bad months of COVID, things have been going very well,” Ralph says. “Of course, the pandemic was rough for anyone in the hospitality industry, but I was able to keep an excellent core of employees and keep everything open.”

Now with the three successful businesses in Damascus, Ralph says his next task will be to renovate and upgrade the Damascus Diner building, which is located on South Shady Avenue.

“It needs some work, so the renovation is a project that will occur during the winter months of 2021-2022,” he says. “I want the diner ready for the big spring season of tourists.”

Turn Back the Clock

Despite his success, Ralph has not always had the “entrepreneurial bug.” But he has worked in the hospitality and restaurant business for much of his life. At age 16, he began working at a Holiday Inn, and he spent his final 20 years of employment prior to retirement working as the general manager of the Cracker Barrel Old Country Store in Abingdon.

After leaving the store, he and Patti made Damascus their home to enjoy “retirement.” As you can guess, Ralph says the couple continues to stay busy, which they like.

“As for the Dragonfly Inn, we get a good amount of business in April, May and part of June from thru-hikers along the Appalachian Trail, but our real bread-and-butter clientele are the bike riders who access the Virginia Creeper Trail throughout the year,” he says. “About 250,000 people use the Creeper Trail every year, compared to about 5,000 people who hike through Damascus along the Appalachian Trail.”

What brought Ralph to then open a diner? He made the decision after a Fourth of July holiday in Damascus in 2017, when he noticed that no local restaurants were open.

“Most local restaurants in Damascus back then were only open every Wednesday through Sunday, but closed Mondays and Tuesdays, and since the Fourth of July landed on a Tuesday that year in 2017, none of the restaurants were open on the Fourth,” he says. “Damascus always has a great fireworks display, so there were about 10,000 people in town on that Fourth with nowhere to eat. I had to send all my Dragonfly Inn guests to restaurants in Abingdon.”

He eventually opened the Damascus Diner, which serves dishes, such as burgers and meatloaf sandwiches from a former establishment called Hey Joe’s that had gone out of business. “Because I thought it was so unusual that no places were open on the Fourth, the idea for Damascus Diner was born,” he says. “Now, we’re busy all the time, serving good Southern dishes.”

As for the coffee shop, it, too, serves great food, in addition to, of course, coffee. “Main Street Coffee & Cream features homemade ice cream, baked goods, sandwiches and an evolving food menu, and all the coffee for our specialty drinks is roasted at Wolf Hills Coffee in Abingdon,” Ralph says.

With three businesses in Damascus, Ralph says plans for a fourth commercial enterprise is doubtful.

“No, Patti would definitely frown upon another business,” he says. “We will certainly stay busy with what we already have, plus I love to work outside and landscape. The Dragonfly Inn has a really nice landscaped yard that also keeps much of my attention.”

Fall in love with the bountiful art and entertainment options in this Virginia region.