8 Reasons to Move to Charlottesville, VA

Full of history, breweries and good hangover food. What more could you want? 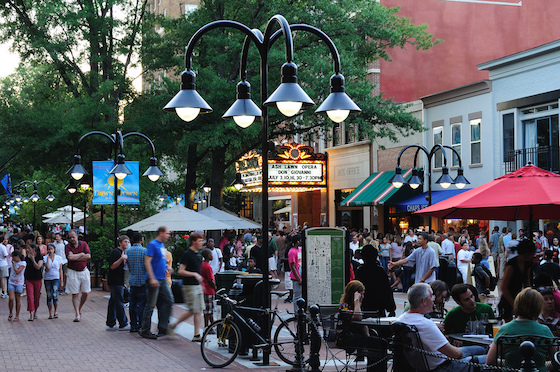 Home to three presidents, Charlottesville’s mid-size college town infused with history. It’s also a lively city ripe with vineyards and breweries, as well as shops, restaurants and parks. Outdoor lovers flock to hike and kayak in nearby Shenandoah Park in the picturesque Blue Ridge Mountains. You’ll find good schools and great amenities in the place Thomas Jefferson once called home.

It’s a brew-tiful thing. Charlottesville and its surrounding areas are known for their many craft- and microbreweries. If you’re up for some serious drinking, hit up the Brew Ridge Trail, Charlottesville’s original self-guided brewery tour that takes you to hotspots like Wild Wolf Brewery and Devil’s Backbone Brewing Company.

2. The University of Virginia

When most people think of Charlottesville, their minds immediately picture UVA, a university founded by Thomas Jefferson and known for its secret societies and impressive alumni. People like Georgia O’Keefe, Edgar Allen Poe and Tina Fey once graced its historical halls. With such an established university nearby, the city is comprised of well-educated young professionals.

Nestled in the foothills of the beautiful Blue Ridge Mountains, Charlottesville is a hub for all things outdoors. It got the nod from Travel & Leisure, who recently ranked it as No. 9 on their list of best mountain towns.

Why Charlottesville Is One of America’s Best Places to Live

In the summer, hiking, kayaking and horseback riding abound, while the winter offers skiing and snow-tubing. Want to take your adventure to the sky? Hot air balloon or paraglide over the scenic countryside.

Three founding fathers, and later U.S. presidents, called Charlottesville home. James Madison, James Monroe and of course, Thomas Jefferson all walked the streets here. If you’re a history buff, you cannot pass up a visit to Jefferson’s stunning home, Monticello. Walking around the city, you’ll be sent back in time, as its rich history dates back all the way to some of the first American settlements.

Whether you enjoy strolling down the streets listening to street musicians or attending concerts in awesome venues, Charlottesville has it all when it comes to music. In the summer, locals head to Fridays After Five, a free concert series that’s been happening for nearly 30 years. Concertgoers will enjoy popular venues like the Jefferson Theater and the smaller Southern CafÃ©.

What’s better than mixing history with shopping and food? We think nothing, and Charlottesville’s Historic Downtown Mall does just that. Considered one of the best parks in the country, people come here to take in the sights and sounds of street performers and shop in the more than 120 shops and restaurants.

Neighborhoods like North Downtown and Blue Ridge-Rugby Ave get the nod because of their proximity to the University of Virginia–meaning activities galore. Wineries, breweries, the historic downtown mall and music venues are all at the tip of your fingers here.

More? A low crime rate and excellent weather (it rarely surpasses 75 in the summer) make these neighborhoods not ones to pass up.

In what’s become an institution amongst Charlottesville residents and UVA students, Bodo’s Bagels does not disappoint. Grab an egg bagel with sausage or a bag of everything bagels after a heavy night of drinking at Charlottesville breweries and we promise you’ll feel (a little) better. If that’s not enough, head over to Ace Biscuit and Barbecue, the unassuming restaurant that’s home to the Ol’ Dirty Biscuit–a fried chicken biscuit dressed with sausage gravy and pimento cheese.