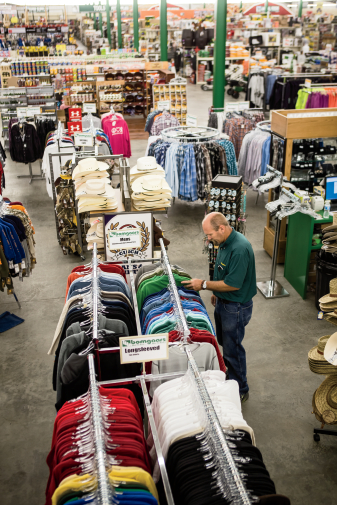 In recent months, a number of new businesses have opened in Campbell County, while several existing companies have expanded. The changing business landscape signals a growing, thriving economic environment in Gillette and across the region.

“Campbell County is a good place for our business because there are lots of good paying jobs, taxes are low, and the county and city are continually growing,” says Torrey Wingert, vice president and chief financial officer at Bomgaars, a home supply store that opened its first location in Gillette in 2013.

Bomgaars isn’t the only company that sees the economic promise of Campbell County. A number of other retailers and service companies have made decisions to invest in the area recently.

“We chose to open a store in Gillette, as we felt it was one of the last large cities in Wyoming without a good sized farm and ranch store,” Wingert says.

While the new store has been received well by the community, Bomgaars expects “continued growth in our store in Gillette as customers are still getting used to who we are and what we sell,” Wingert says. “We are truly a four-season store and promote heavily year round with sales and events.”

Bomgaars isn’t the only new retail development in Campbell County. Also in 2013, Universal Athletic, which sells and services athletic gear for local athletes, high schools and colleges, moved to a bigger location. While the company is not new to Gillette, it continues to invest in the local community and its business in Campbell County.

Heaven to Earth, a locally owned gourmet cooking store, opened in Gillette in 2012. Owner Gail Winterhaler says the community has been an ideal place to sell her wares, which include coffees, teas, oils, vinegars, herbs and cookbooks. Local customers have responded well to the shop’s active social media presence, weekly giveaways and cooking classes.

In addition to retail, the Campbell County economy is experiencing growth in the industrial sector as well. Arnold Machinery, a distributor of construction, mining and agricultural goods, built a new, larger building in Gillette in 2012. The new location allows the company to serve more customers in the region and represents continued investment in Campbell County.

Interstate Power Systems, which has had a location in Gillette since 1972, has also undergone major expansion in the area. To facilitate new services for its customers in mining, oil and gas, and over-the-road customers, Interstate Power expanded from approximately 40 employees in Gillette in 2007 to 185 by 2011.

“Campbell County has significant energy resources and has been home for Interstate since 1972,” Groombridge says. “We have long-term outstanding relationships with our customers and the community that we support. Campbell County offers great services, education facilities, and entertainment that is attractive to employees and potential employees.”