Skip to content
Home > WY > Gillette > Experiences & Adventures > Why Everyone Needs to Experience These Murals in Gillette, WY

Why Everyone Needs to Experience These Murals in Gillette, WY 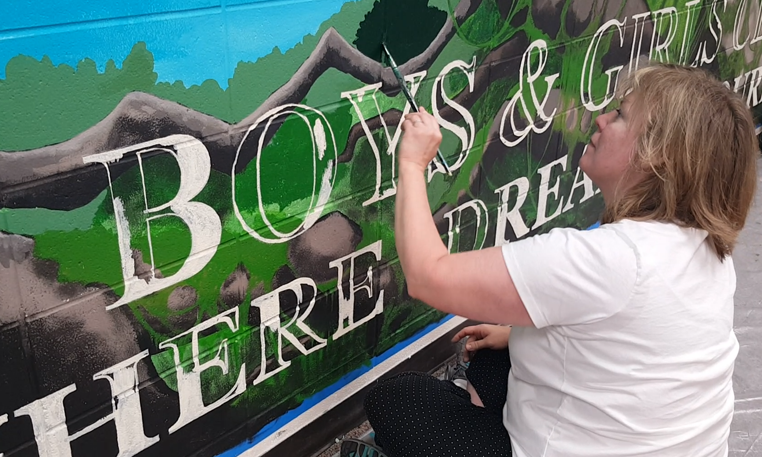 Built squarely on American coal industries, Gillette, Wyo. has always been subject to the boom-bust cycle that impacts all mining towns.

However, the times, they are a-changin’ and Gillette’s economy is currently in the midst of a major diversification, with public art being a massive part of a de facto rebranding effort. Specifically, multiple brilliant murals have been popping up around the town. These murals pay tribute to the past and look to a promising future for the small Wyoming town.

And are just pretty cool – and something unique that makes Gillette unique.

The Giant Murals of Harvey Jackson

Photo: Courtesy of Kevin Dooley under a CC 2.0 license.

Before Gillette’s current economic diversification, local artist Harvey Jackson painted two massive murals in the city. His first iconic mural, painted in 1999, was a mustachioed cowboy on the side of a local barber shop that welcomed visitors into the modest coal town. Last year, the iconic cowboy was replaced by collage mural painted by kids from the nearby AVA Community Art Center under the direction of another local artist – Patrick McGirr (see below).

In 2004, Jackson painted another large-scale iconic mural on the local L&H Industrial building. The 13,000-square-foot mural was painted as a tribute to two major industries in Gillette: coal and cattle. In 2014, the crumbling mural was refurbished and redesigned, with Jackson adding rolling hills, coal and more clouds.

Why Gillette, WY is a Great Place to Live

When the decision was made to replace Harvey Jackson’s cowboy mural, the AVA art center tapped Patrick McGirr, a Gillette native who is currently thriving in the vibrant Denver art scene. Local talents, the Vice President of the AVA board during the time, Sarah Ferguson, and Secretary of the AVA board, Laura Chapman, designed most of the mural and headed the project. The artist and more than a dozen students from the art center’s summer camp program painted a series of different artworks over an aquamarine background and under and painted banner that read, “Change Inspires Creativity.”

Another mural by McGirr, painted in 2014, can be seen on the side of Lula Belle’s Café.

Here’s Where You Should Take Day Trips Near Gillette, WY

As noted above, the AVA Community Art Center is a major force behind the murals in Gilette and a garage door the organization’s own building features a mural by artist Christopher Amend.

Sarah Warne, executive director at the art center, recently told Livability that the mural was designed to show both a sense of community and the various forms of art offered at the AVA (Advocacy for Visual Arts) center.

“Sign painting has become a lost art since vinyl signs were created,” Warne noted. “Our board president Dara Corkery has been the lead on this project as painted signs are one of her favorite forms of art.”

Another garage door mural by local artist and art center contributor Mary Little pays tribute to those members of the armed forces who served in Iraq.

Boys and Girls Club Mural at the Gillette Learning Center

The murals and arts culture in Gillette extends all the way down to the city’s youngest residents, with the rapidly-expanding chapter of the Boys and Girls Clubs of America doing its best to support budding young talent.

The B&G Club recently moved in to a new building, an abandoned elementary school, and local businesses have been “adopting” rooms for renovations. Some rooms are repainted just to be tidied up, but in the Rec Room – B&G Club members are going all out and painting a massive wall mural.