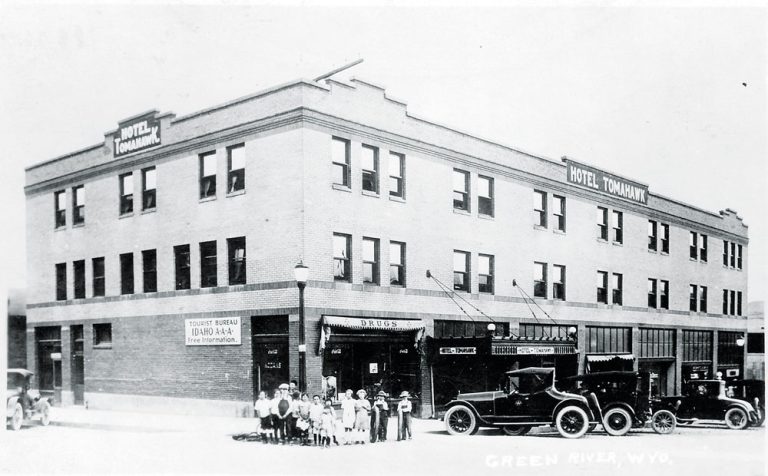 With the revitalized Tomahawk Hotel as its centerpiece, downtown Green River is positioned to attract more residents and business owners who want to live, work and play in the heart of the city.

“The Tomahawk Hotel is significant to the economic health of downtown because it has the potential to serve as an anchor and provide opportunities to create a critical mass of residential, commercial and retail occupancy, says Jennie Melvin, administrator of URA-Main Street. “These three pillars of economic development are the basis for creating a vibrant downtown.”

The hotel’s new owner, Green River Opportunities Wyoming (GRoWYO), announced that it is remodeling the second and third floors of the hotel building. That is expected to create new residential, office and retail space.

Experience Your Next Adventure in Sweetwater County, WY

The Tomahawk Hotel is “the heartbeat of downtown,” says Marty Carrollo, a co-owner of GRoWYO. The group is composed of local private investors who may participate in future projects.

“We really are looking at how we can make our communities better,” says Carrollo.

The Tomahawk Hotel has been a local landmark since its opening in 1921. It is located near some of Green River’s important assets, such as the pedestrian overpass that crosses the Union Pacific rail yard and leads to Expedition Island and the city’s splash park. It is near the recently redeveloped Clock Tower Plaza, which is currently used for several events that bring people downtown, Melvin says.

The hotel is conveniently located within walking distance of many services and businesses, including government agencies.

“This creates the opportunity for more foot traffic downtown, which is needed to bring activity and new energy to the district,” Melvin says.

GRoWYO’s renovations of the building include installation of a fire protection system and an elevator to provide access to the upper floors. The second and third floors are expected to be ready for occupancy within the next year. The new owners have not announced plans for how the space will be used, but promise to keep the community informed.

“We see this as a partnership,” Carrollo says.

The Tomahawk Hotel is a key part of the Green River Downtown Historic District, which recognizes the significance of the area. The city became a Main Street community in 2005, with the goal of encouraging the revitalization of downtown and historically sensitive rehabilitation of buildings.

GRoWYO’s renovation of the Tomahawk Hotel is expected to add momentum to those efforts.

“It is anticipated that there will be office, retail and living space available (in the hotel building), which will attract more people downtown and therefore create more incentive for businesses to locate there,” Melvin says.

Green River has a strong entrepreneurial sector, with approximately 30 percent of all business licenses being for home occupations, she says.

“Ideally, the Tomahawk will entice some of these businesses out of their homes and into a storefront, giving residents more reasons to explore our downtown and see what Green River has to offer,” Melvin says.

Currently, approximately 65 businesses are located within the Main Street District. The Green River URA-Main Street Agency is a volunteer organization whose mission is to create a vibrant downtown and riverfront that is attractive and encourages economic development while preserving its historical character.

As a nationally accredited Main Street program, the organization engages in fundraising activities to provide façade renovation grants for downtown businesses. It partners with other economic development agencies to provide training at no cost to businesses. Another service is funding beautification and enhancement projects such as flowers, benches, trash cans and Christmas lights for downtown.

URA-Main Street partnered with the city to redevelop the Clock Tower Plaza, a popular space for community events that encourage people to visit downtown and which provide opportunities for businesses to have added exposure. The Green River URA-Main Street Agency is currently developing a strategy and work plan that will be the road map for the continued efforts to revitalize downtown.

“An anchor with the potential of the Tomahawk will be key to the revitalization of downtown and other City of Green River efforts by creating a space where people can live, work and play,” Melvin says.