Visit a Real Reindeer Farm in Alaska This Christmas

Lean into the magic of the holiday season with a visit to a reindeer farm. 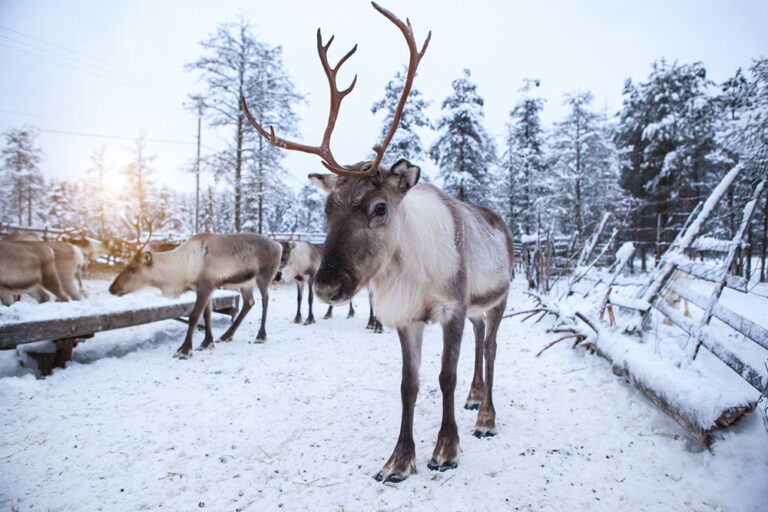 A farm in Alaska might not seem like a trending destination for tourists. But come December, Reindeer Farm just outside of Palmer — a town of around 6,000 people located 40 miles northeast of Anchorage — is a hot spot, drawing thousands of people who come to visit the animals at Christmastime.

It all started in 1987 when Tom Williams and his wife, Gene, traveled to Northern Canada to purchase a herd of reindeer. They brought 20 of them to the Palmer farm where Tom had grown up (it was a dairy farm back then). Being raised alongside reindeer not only proved to be an ideal childhood but also turned into a career for their daughter, Denise Williams Hardy, who has been running the farm alongside her family since 2011.

While the reindeer herd has numbered as high as 300 in the past, it’s currently at about 100, a number that keeps Hardy plenty busy and perfectly suits the farm’s role as an agritourism destination. Hardy says the atmosphere is like a petting zoo, but they also breed and sell live animals. Visitors can hand-feed the reindeer in their pens and take a guided tour of the farm, which has also gained a few other faces over the years.

“We have a bison, Dolly — we didn’t look for her, but she came to us, so we bottle-raised her,” Hardy says. They also have Rocky, a 2-year-old rescue moose; two elk; and a few Tibetan yaks that are part of the tour. In addition, guests can take horseback trail rides on the mountain behind their property and even catch a glimpse of a glacier.

Wondering what it’s like to hang out with reindeer all day? It’s a bit like hanging out with kids. “They are super fun, and all have individual personalities, like horses,” Hardy says. Some are ornery and like to paw, so they must keep an eye on them during tours with children. Others take to chewing on clothing, so visitors are given a heads-up before entering the pens, just in case they don’t want to lose their sweaters.

Joys and Challenges of Raising Reindeer

Hardy goes above and beyond caring for the reindeer, even raising them indoors if their mothers abandon them. These babies, who weigh only 10 and 15 pounds at birth, live in the family’s house for six weeks, where she’ll feed them from bottles. “They’ll learn to climb stairs, get into garbage and get into trouble,” she laughs. One of her (now grown) bottle baby reindeer, Ana, likes to jump on her pseudo-mother when her back is turned. It’s all in fun, though. “She’s just being friendly,” says Hardy. “She’s sweet — just naughty!”

Contrary to Christmas lore, reindeer actually don’t like carrots. Instead, they prefer to eat reindeer pellets, a special food developed by the Reindeer Research Program at the University of Alaska Fairbanks.

Out of 100 reindeer on the farm, about 30 of them are given names and trained to halter.

“We have one named Peanut, so every year she had a baby, we gave them nut names: Cashew, Hazelnut,” Hardy says. (Also of note: Peanut’s mother was named Butter.) “Our favorite names are just common ones — Karl, Dave, John. We shy away from Sven because everyone I know who has a reindeer has a Sven, and Donner, Dasher, Prancer and Vixen — those are all taken.”

As joyful as raising reindeer might sound, it does have its unique challenges. “I worry about herd health all the time,” Hardy says. For example, the reindeer have been on the same 80-acre pasture for many years, so it’s crucial to replant them to keep the animals healthy continually. She says she’s also concerned about parasites and must constantly reevaluate what dewormers to use. On top of that, staffing an agritourism destination over the holidays presents its own challenges.

While visitors can come year-round to the farm (with a reservation), December is one of the busiest times. They host an event called Christmas on the Farm, which draws thousands of visitors from Dec. 23 to 24. The two-day event features reindeer sled rides, crafts with elves, reindeer tours, tractor-pulled wagon rides, Christmas lights timed to music, an indoor snowball fight and a bonfire. “Sometimes it’s 20 below zero, so we serve lots of hot chocolate,” says Hardy.

Her husband, Joshua, plays Santa. Their four children, several grandchildren and her sisters and their families are also on hand to help. “It’s really a special bonding time. We all work together dressed like elves, singing Christmas carols in our hearts,” she says.

Currently, the farm doesn’t have a large heated area, so they hope to add one. For now, they turn the existing farm mechanic shop into a gathering spot, putting up wooden screens to block the wind. The reindeer don’t mind the cold, however. “Winter is their season — they love it,” says Hardy, noting the animals thrive in temperatures as cold as 60 below zero. Thanks to special blood vessels in their legs, reindeer can keep their extremities cooler and core body warmer to survive.

In addition to all the festivities at the farm, Santa and his reindeer are always present for the downtown tree lighting in Anchorage (taking place Nov. 30 this year). In addition, they can be rented for special events, including an elaborate sleigh entrance and up to two hours of time with the animals. Any interaction with reindeer is sure to put visitors in the holiday spirit. After all, Hardy says, “What better place to spend Christmas than a reindeer farm?”