Why Western Arkansas Should be Your Next Stop for Outdoor Adventure

From the Ozarks to the Arkansas River, nature is in easy reach throughout the region 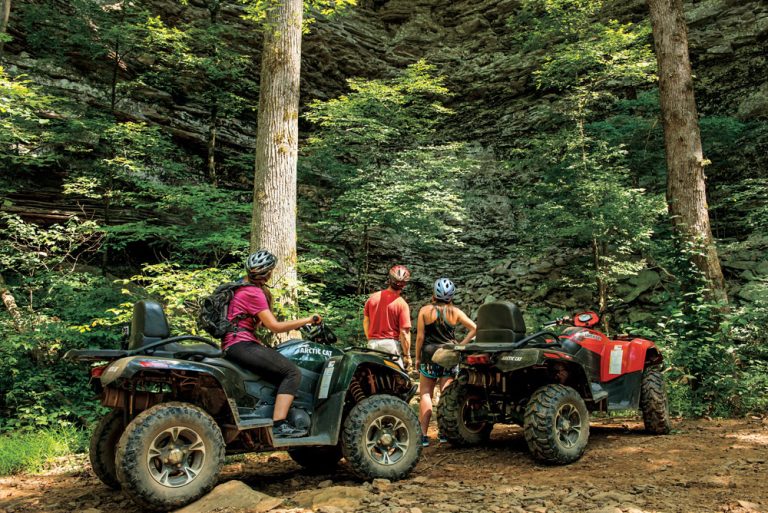 Fort Smith / Courtesy of Arkansas Department of Parks and Tourism

Between the flatlands of Oklahoma and the plains along the Mississippi River rises a majestic, mountainous playground known as Western Arkansas.

The landscape in this area is dramatically different from what is found immediately to the west or east, with woodlands and ridges and lakes and rivers combining to create spectacular vistas and a wealth of activities for outdoor enthusiasts.

“That is one of the richest areas we have in Arkansas when it comes to outdoor recreation opportunities,” says Joe David Rice, Arkansas tourism director. “It’s an area really blessed with natural resources.”

In fact, the natural resources are so abundant in Western Arkansas that the region boasts not one but two national forests. The rustic 1.8-million-acre Ouachita National Forest has several areas – including the Black Fork Mountain Wilderness – that don’t look much different today than they did when Hernando de Soto explored them in 1541.

“The Ouachita is still largely an untouched area,” Rice says. “It’s great for wildlife observation. There’s a good bear population there, and bird watchers love it. It’s a place where people can get away from it all, yet it’s so convenient. You can get just a short distance off U.S. Highway 71 or 270, and you’re out in the middle of some rugged and pristine countryside.”

To the north of the Ouachita is the Ozark-St. Francis National Forest, which covers 1.2 million acres, largely within the picturesque Ozark Mountains. This is a popular area for nearly all types of outdoor recreation, including camping, hiking, swimming, fishing, hunting, boating, biking and off-roading.

“It has incredible wildlife viewing opportunities, and some of the best hiking and backpacking spots in mid-America,” Rice says. “And there are some pretty spectacular ATV and mountain biking trails in that national forest, too.”

The premier pathway in the region is the 218-mile Ozark Highlands Trail, which winds its way across the width of the Ozark National Forest from Lake Fort Smith State Park to the Buffalo National River.

“That’s one of the longest trails in this part of the country,” Rice says. “It goes through the heart of the Ozark National Forest, along some spectacular creeks and remarkable countryside. That trail is a great way to see the Ozarks.”

Discover How Western Arkansas is a True Great Escape

Out and About in Fort Smith, AR

Fort Smith is a hub of arts, culture, entertainment and recreation in Western Arkansas.

Anglers can take advantage of enhancements to fishing facilities at Fort Smith Park, while the Janet Huckabee Arkansas River Valley Nature Center, operated by the Arkansas Game and Fish Commission, offers free activities and workshops throughout the year.

One of the region’s primary attractions is the Fort Smith National Historic Site, operated by the National Park Service. The site inncludes the remains of the original 1817 fort on the Arkansas River, complete with the courtroom of famed “Hangin’ Judge” Isaac C. Parker and a notorious frontier jail known as “Hell on the Border.”

Fort Smith has been selected by the U.S. Department of the Interior to be the location for a new United States Marshals Museum, set to open in 2019 on the banks of the Arkansas River.

One of the literal high-lights of the Ozark National Forest is Mount Magazine, which is the state’s tallest mountain with a peak of 2,753 feet. There are numerous areas throughout Mount Magazine State Park that are ideal for adventure activities such as rock climbing, rappelling and hand gliding.

The Lodge at Mount Magazine has 60 guest rooms and breathtaking views of the Petit Jean River Valley and Blue Mountain Lake. “You can go up there in the summer months and it will be 10 to 15 degrees cooler,” Rice says.

“That’s a favorite place for everybody from honeymooners to motorcyclists,” Rice says. “It has some great views. You can see well into Oklahoma from there, though it’s so high that sometimes you wake up and you’re enveloped in a cloud that may not clear until noon.”

And finally, for those who prefer to be closer to the ground but not actually on it, there is an abundance of water recreation offerings throughout Western Arkansas. In addition to the Arkansas River – which travels through several communities in the region on the way to the Mississippi River – there is the 70-mile-long Mulberry River, 1,400-acre Lake Fort Smith and 960-acre Lake Hinkle.

“You have everything from small lakes to some pretty big bodies of water,” Rice says. “There are some great canoeing opportunities and productive bass fishing locations. It’s just really well-balanced. You can paddle around on a kayak or get out on a bass boat with a 200-horsepower motor. They have the basis covered in Western Arkansas when it comes to water recreation, and really all outdoor recreation.”