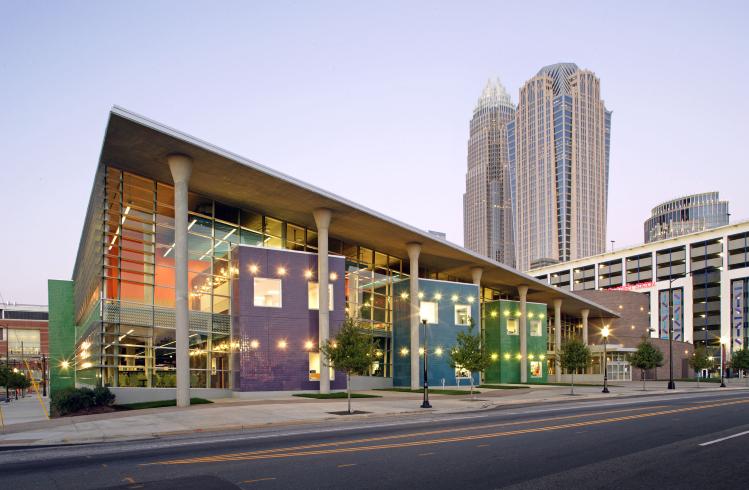 Repeatedly, ImaginOn: The Joe & Joan Martin Center in Charlotte, NC, got the most mention alongside phrases such as “excellent programs and environments for kids.” This colorful, 102,000-square-foot facility opened in 2005 to serve area youth of all ages.

Since ImaginOn is a partnership between the Children’s Theatre of Charlotte and Charlotte Mecklengburg Library, both the programming and the facility itself instill appreciation for drama and literature. When entering the facility, children marvel at the central StoryLab area, an interactive exhibit space featuring a three-story sculpture called the Story Jar. Surrounding the Story Jar is Stage Play, which consists of several installations allowing kids to explore different aspects of theater.

On the first floor, the Spangler Children’s Library serves children from birth through fifth grade with books, DVDs, CDs and children’s software, a baby and toddlers’ area, early literacy and computer stations, and homework resources. On the second floor, the Loft is a space exclusively for teenagers ages 12 to 18. Also on the second floor, Studio-i is a film and recording studio available to families and teens.

ImaginOn’s two theater spaces, the 570-seat McColl Family Theatre and the 250-seat Wells Fargo Playhouse, are used for performances by the Children’s Theatre of Charlotte, as well as for its popular theater classes and camps for youth ages 3-18. Another space called The Round is used for story time, puppet shows and other programs.

Wow Factor: Besides an innovative multidisciplinary approach to engaging kids in learning, ImaginOn is Charlotte’s first public building certified by the U.S. Green Building Council and attained LEED certification at the silver level in 2006.

Find more things to do in Charlotte, NC.