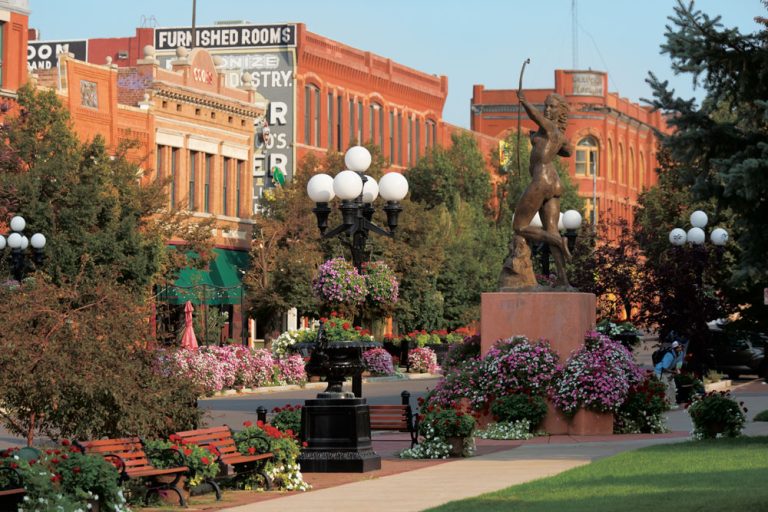 One key announcement is that Doss Aviation received a 10-year extension of its contract with the U.S. Air Force to provide ground and flight training to pilots, combat systems officers and international military students. The $290 million contract will last through January 2027.

“Any aviator who wants to fly for the U.S. Air Force must come through Pueblo for initial flight training at Doss Aviation,” says Mark Lester, Doss Aviation CEO. “We call our operation ‘The Gateway to Air Force Aviation,’ and pilots who train here get a good taste of Pueblo before they go on to their flying careers.”

Doss provides lodging, dining facilities and a workout center to all trainees.

“Pueblo is known as the Home of Heroes, so the city is perfect to host such a key military operation,” Lester says. “It’s a great fit, and Doss is honored to be a part of this mission.”

The Doss announcement is one of many good news items occurring in Pueblo. Another is that wind tower manufacturer Vestas expanded its local facility by adding a large storage center for blades, turbines and other parts and equipment.

“Vestas originally chose Pueblo in 2009 largely because of our history in the steel-making industry along with our great workforce and incentive dollars that we offer,” says Jeff Shaw, executive director with the Pueblo Economic Development Corporation, or PEDCO. “Vestas has the largest wind tower manufacturing facility in the world right here in Pueblo, and the company built its 5,000th tower in July 2017.”

Another company choosing Pueblo is CR Minerals, which processes products used as additives in cement for the construction industry. The New Mexico-based company is building a $10 million facility that will open in 2018 at St. Charles Industrial Park.

“CR Minerals also chose Pueblo for our geographic location, skilled labor force and job incentives,” Shaw says. “All these announcements make it a busy time for economic development in our city and region.”

In 2014, Austria-based pewag expanded to Pueblo with a chain manufacturing facility, and in 2017 the company announced the relocation of its U.S. Headquarters for Traction Chain from Chicago to Pueblo.

“We are also planning a 3,500-square-foot expansion to our manufacturing facility, and we will expand our distribution center by 12,000 square feet in 2018,” says Ron Francis, pewag Traction Chain plant manager. “We’ve had great cooperation from PEDCO, the city council and county officials every time we want to do something to better our company. Business and government leaders are very accommodating in Pueblo when helping companies advance.”

The pewag company manufactures snow and traction chains for the U.S. and Canadian market, and the chains are used mostly on semi-trucks as well as large vehicles and equipment used in forestry and mud applications.

“Pueblo is now our sole center for North American production and distribution for traction chains, and we will ultimately increase our workforce from our current 29 employees to 55 employees,” Francis says.

Who Supports the Pueblo, CO Community? Ask the Voters.

Also expanding in Pueblo is Big R Stores, which stocks about 60,000 farm and ranch products, outdoor sporting goods and pet products at its 26 stores in Colorado, New Mexico and Texas. The company announced plans in 2017 to construct a brand new distribution warehouse in Pueblo.

“I like Pueblo because the officials are pro business, the cost of living is favorable and a great workforce is available,” Carroll says. “Pueblo gives us a centralized location for quicker distribution to all our stores, and Pueblo also offers big-city amenities while retaining its small town feel.”