From solar and wind to recycled plastic, companies are investing millions and creating jobs in Southern Colorado. 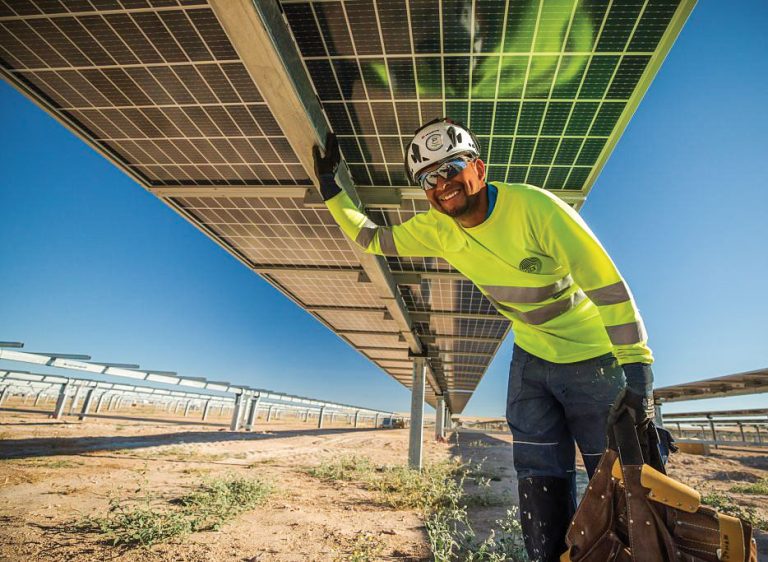 A lot of communities will tell you the sun is shining on their economy. In Pueblo’s case, it’s literally true.

Another company, Ecologic Materials, recycles grocery bags, water bottles and other single-use plastics and turns them into an asphalt additive that makes roads more durable.

Employers are investing millions of dollars and creating new jobs, says Jeff Shaw, president and CEO of the Pueblo Economic Development Corp. (PEDCO). “Pueblo’s location and the workforce have a lot to do with it,” Shaw says of the region’s desirability as a business address.

“These projects bring our customers the clean, reliable and affordable energy they want while supporting the Pueblo community. They are a big win for Pueblo and for Colorado.”

Bighorn Solar is expected to abate 433,700 metric tons of carbon emissions per year, the equivalent of 92,100 fossil-fuel-burning cars.

The solar project is just one component of EVRAZ’s efforts to reduce its environmental footprint. The Rocky Mountain Steel facility, which employs about 1,000 workers, captures nearly all the dust its furnace produces and repurposes it for products such as fertilizer and tires. EVRAZ also recycles scrap metal to use in new steel products. It melts the equivalent of more than 1 million cars each year in its electric arc furnace.

Lightsource BP and Xcel Energy are developing a second solar project in Pueblo. The Sun Mountain solar farm will have a capacity of 298 MW. Lightsource BP will finance, build, own and operate the facility and deliver the solar energy it generates to Xcel Energy.

“Xcel Energy is excited to continue to lead the clean energy transition through our support of the Bighorn and Sun Mountain solar projects,” says Alice Jackson, president of Xcel Energy – Colorado.

CS Wind Chairman Seong-Gon Gim says the facility’s expansion will create new jobs in Pueblo. The company is growing and diversifying in both the on-shore and off-shore wind industries.

Ecologic Materials announced the creation of 17 jobs at its new facility. The company recycles plastics and turns them into binding material that prevents asphalt roads from cracking.

“Pueblo has the best workforce in the state and an economic environment that allows companies like Armstrong Steel to continue to grow and succeed.”

Armstrong Steel, a manufacturer of steel buildings, selected Pueblo for its new 200,000-square-foot factory. At full capacity, the facility will employ 51 workers and generate an estimated $2.6 million in annual payroll.

The city and PEDCO have been integral partners in helping bring new jobs to the region, says Ethan Chumly, CEO of Armstrong Steel.

“Armstrong’s Pueblo factory is a logical and necessary step toward strengthening the company’s competitive position in the marketplace,” Chumly says. “The larger, modern facility will accommodate leading edge manufacturing technology, lean equipment layout and an automated workflow, resulting in increased efficiency and employee productivity. It’s a win-win situation for Pueblo and Armstrong Steel.”