Arts Are Pouring Out of Pueblo 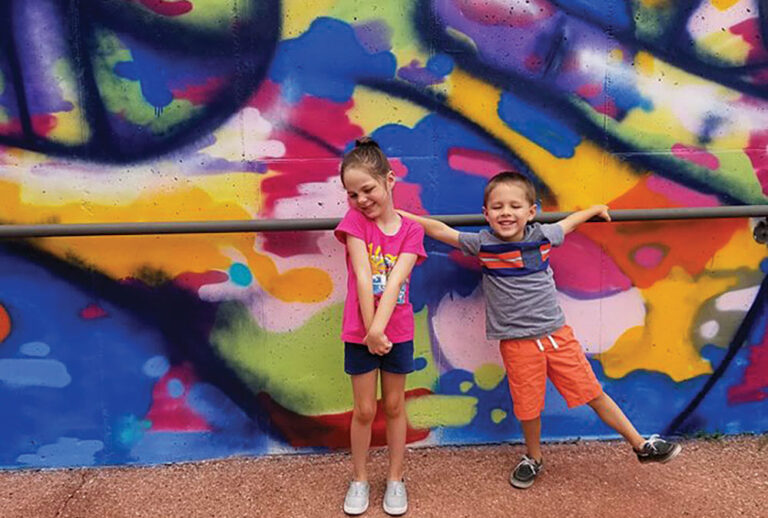 Artist Dan Levinson was working on a mural in the Eilers neighborhood, a part of Pueblo that has a rich steel history when his uncle stopped by.

As Levinson painted a steelworker on the side of the Do Drop Inn, his uncle, who had worked in the Pueblo mill, relayed vivid details of what the job was like, from the fiery glow of the molten metal to how overpowering the heat and smoke could be.

“I used his stories on the fly to paint and to illustrate what it felt like to be working in the steel mill,” says Levinson, who has completed eight murals in Pueblo.

His most recent mural project features a larger-than-life steelworker, both heroic and gritty, and painted to resemble a historic black-and-white photo with sepia tones yet executed in a modern way.

From murals like Levinson’s that tell stories of the city’s history to an initiative that invites high schoolers to create public art projects, Pueblo has a thriving arts community and continues to nurture its reputation as an artistic hot spot.

The Arts Are Essential

Today, visitors and residents alike can find plenty to do in Pueblo’s Creative Corridor, which is packed with galleries, museums, sculptures, cozy shops and live music.

The area is humming with creative energy, playing host to programs, festivals and artistic events throughout the year.

10 Things You Need to Know about Pueblo, CO

Get the inside scoop from locals on what makes this southern Colorado city so special.

David Edwards, a practicing artist who is proficient in jewelry, sculpture, photography and painting, grew up in Pueblo and has witnessed the art scene grow over the years to what it is today. As the Pueblo Arts Alliance (PAA) president, Edwards believes that the arts are essential to the economic and cultural vitality of a community.

The city has a number of top-tier artists living and working here, Edwards says, including Michael Boyd, an internationally known jewelry artist who started the Colorado Center for Metal Arts, which is attracting famous metalworkers to the area for workshops.

Plus, Pueblo has several outstanding venues in the performing arts, including the Sangre de Cristo Arts Center, which offers visual, dance, music and performing arts. Steel City Theatre Company puts on musicals, comedies and dramas and holds camps for kids. During COVID-19, the theater company pivoted to offer socially distanced shows outside and hosted everything from murder mysteries to karaoke on its patio.

The art alliance offers affordable studio space for creatives on Grand Avenue, creating a collective home for 17 creative businesses and 40 artists. Special events are held here, including First Friday Art Walks and Second Saturday Open Studios. Next up for PAA is an online gallery offered for artists and craftspeople.

“PAA is also planning a series of classes geared to the business side for artists,” Edwards says.

Involving Youth in the Arts

Budding artists have an opportunity to contribute to Pueblo’s art scene, as well.

In a recent project, high school artists worked with local artist Eric McCue to create a piece called “Weight of Waste,” a sculpture located outside the El Pueblo History Museum, intended to draw attention to recycling.

“It’s a cool initiative because it lets the youth have a voice in town and make an impact through art.”

Eric McCue, a local artist who worked with high school students on “Weight of Waste”

“They got to learn that metal does weird things,” McCue says. “When you weld it, the metal changes and moves.”

Not only did the students get to work alongside McCue, learning how to weld, but they also learned the business side of public art projects, including how to work within a budget and secure a space for the artwork.

“It’s a cool initiative because it lets the youth have a voice in town and make an impact through art,” McCue says.