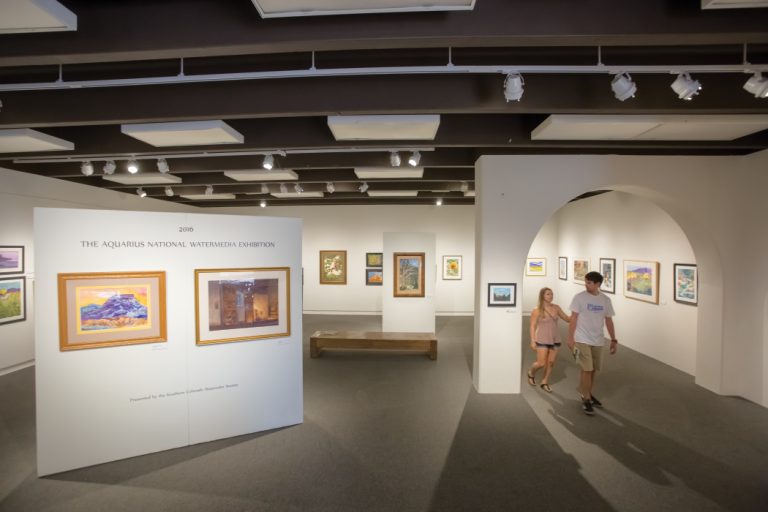 The Arts Alliance Studios, an incubator run through the Pueblo Arts Alliance, was nearly filled to capacity soon after opening in 2015. About 40 artists are occupying 17 affordable, multiuse studio and retail spaces in Pueblo’s Creative Corridor. The Pueblo Arts Alliance purchased the 16,000-square-foot property at 107 S. Grand Avenue and 401 City Center Drive with the goals of attracting business, retaining assets and creating sustainability for the local creative community.

“Spaces like this, with a community of creative individuals and collaborations, are rare,” says Daniel Levinson, executive director of the Pueblo Arts Alliance. “Economic growth for creative industries is already happening at the studios.”

Features include individual and shared studios, retail spaces on the first floor and a large shared outdoor plaza where tenants participate in group endeavors such as a “yarn-bombingâ€ project, during which visitors helped artists decorate the plaza with yarn creations on trees, gates and signage.

“We have a great sense of community at the studios and we draw inspiration from one another,” says Jerry White, a master leather worker whose business, Knot’s End LLC, rents space at the studios. “It doesn’t matter what time of day you come in, there is always someone here creating something and we all love to get together and bounce ideas off of each other. I love being here because it opens me up to new ideas and allows me to push myself to be better.”

Artists are coming to the studios from as far away as Denver to work in many fields, including painting, photography, sculpting, master leather-work, poetry and fashion design. The largest tenant is Formulary 55, which creates handmade soaps and beauty products that are sold at national shops. The Alliance expects to have a stand-alone creative industry, such as a brewery, to occupy the one-story building adjacent to its larger incubator building.

The Pueblo Arts Alliance, a non-profit organization that helps artists and art organizations by assisting in the promotion of events, worked for seven years to make the studios a reality. In 2013, the group helped Pueblo win the Governor’s Arts Award and the state-designated Pueblo Creative Corridor was formed, identifying the city as a creative and cultural destination while providing residents with better access to the arts.

“When I moved to Pueblo last year, I was ecstatic to find that the arts are thriving here,â€ says Levinson, who also is a painter working out of the Arts Alliance Studios.

Dozens of studios, galleries and other arts-based businesses now host events such as First Friday Art Walks and Street Beats. The Alliance presents the first “Shenaniganza,â€ an arts and cultural festival, in summer 2017.

Although the Sangre de Cristo Arts and Conference Center has been showcasing the art and culture of the American Southwest since 1972, new leadership is bringing Pueblo’s beloved facility international recognition with high-profile exhibits. Jim Richerson, who became CEO of the center in 2014, is striving to make it a world-class facility.

“The arts center is multifaceted, providing a rich array of visual arts, performing arts and a first-rate children’s museum,â€ says Richerson, whose 30-plus-year career includes projects in Chicago, Jordan, Tunisia and Puerto Rico. “The lighting, peoples and landscapes of Pueblo have always drawn those with an artistic bent.”

The center presents more than 20 exhibitions each year, and in 2016 hosted its highest-profile exhibit to date – Ansel Adams: Classic Images. Richerson says to watch for more big exhibits, along with the programming that locals have come to expect from Sangre de Cristo. In summer 2017 the center will host a large exhibit of Rembrandt prints, and in summer 2018 a show about the history of animation.

Each year, the arts center hosts more than 125,000 visitors and offers more than 375 classes and 145 workshops. The center also has a performing arts Stage Series, schools of dance and ballet, and the enormously popular, award-winning Buell Children’s Museum.

In 2022, the center will celebrate its 50th anniversary; it has already signed a new 30-year lease and operating agreement with Pueblo County.

“I see my contribution as leading a team to create a master plan and set up the center for the next 50 years of continued service to its community,â€ Richerson says. “There is something here for everyone of every age. We live the mission of lifelong learning.”

“When I moved to Pueblo last year, I was ecstatic to find that the arts are thriving here.”