Skip to content
Home > CO > Pueblo > Love Where You Live > Check Out the New Developments in Pueblo, CO

Check Out the New Developments in Pueblo, CO

New pedestrian bridges and urban revitalization are among the key projects taking place. 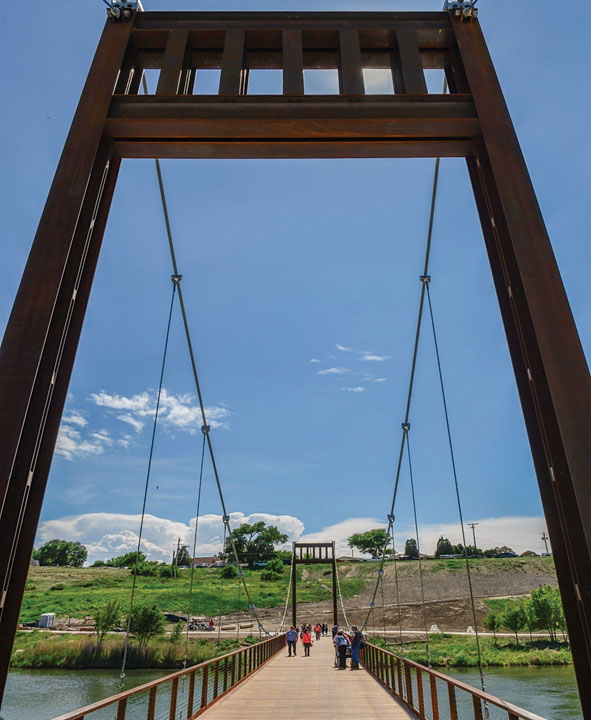 After levees failed in New Orleans during Hurricane Katrina in 2005, the federal government required repairs to flood-control levees around the country, including the 3-mile Arkansas River Levee in Pueblo, CO.

Led by the Pueblo Conservancy District, the multiyear project went far beyond reconstructing the levee. A new pedestrian bridge was dedicated in 2021, while a second is slated to be installed in 2022, making a 1.5-mile loop.

“It’s going to expand the ability for the community to get out and recreate in so many different ways, plus bringing more people to Pueblo,” says Corinne Koehler, president of the Pueblo Conservancy District.

The project also replaces mural art that had covered the levee for years. Over many decades, murals replaced graffiti until the levee had become a 3-mile-long mural, certified by the Guinness World Records as the longest painting in the world. Most of the art was lost during the reconstruction, but artists are once again adding color to the levee.

Another transformation is taking place at the Pueblo School for Arts and Sciences’ Fulton Heights Charter Academy. A vacant lot is being converted into a multipurpose building that will give the school much needed music space, a science lab, a gym and a cafeteria.

“Fulton Heights is also a maker school, which means that students are learning how to use the design process, and all classrooms have makerspaces,” says Principal Drew Hirshon.

The new building will also give students more space to show off their projects as well as meet with engineers and other professionals in the community.

The K-8 charter school of 250 students opened in 2018 as part of the Pueblo School for Arts and Sciences, a network of three school campuses, a home-school program and an e-learning program, all of which are based on the Paideia philosophy of active dialog through coached projects.

These include Hyde Park Gardens, a subdivision that will be made up of 98 single-family homes. While it was paused for a few years during the financial crash, it is now nearing completion on Pueblo’s Westside.

Additionally, Pikes Peak Park, a development that will soon be located about three blocks from Hyde Park, has a groundbreaking planned for 2022. This mixed-use, mixed-income subdivision will include more than 600 new single-family and multifamily housing units as well as public green spaces designed to encourage outdoor activities.

The Pueblo Housing Authority also has a number of projects in the works. It’s currently in the middle of a four-phase project to replace the Sangre de Cristo Apartments, a 212-unit public housing development built in 1952, with townhomes.

A number of other revitalization projects have also taken place in the region, thanks to the Pueblo Urban Renewal Authority (PURA), an arm of the city that works to revitalize Pueblo using tax increment financing to provide development incentives or incur debt to ensure key developments can take place.

For example, PURA provided bond financing to supplement federal funding to build the Dillon Drive Interchange, which was necessary to support a large multiphase commercial development feasible at the northern gateway to the city along Interstate 25. Additional connections to the main flyover will support new developments.

PURA also secured a regional tourism grant to expand the Pueblo Convention Center and build the Professional Bull Riders Sport Performance Center, a one-of-a-kind athletic training facility where athletes can improve their bull riding skills and work on injury recovery and prevention, among other things.

“The grand opening (for the center) was in 2019, just in time to pause for the pandemic, but as Colorado opens back up, that facility will go back to the original plan to bring in different types of athletes from around the country for physical training and physical rehabilitation,” says Jerry Pacheco, executive director of PURA.