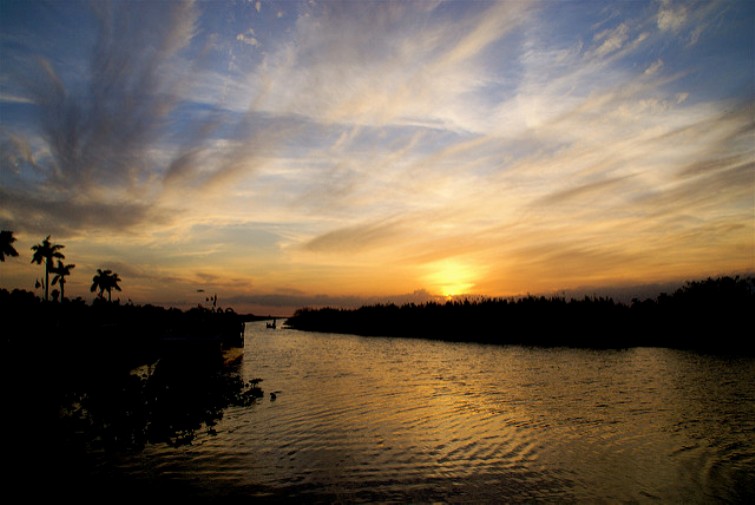 Everyone knows Florida is filled with treasures – after all, it’s a favorite vacation and retirement destination, a place known for its sunshine and gorgeous beaches. But there are seven other great reasons to visit or put down roots in the state, and you may be surprised that a couple of them are underground. Here’s a look at Florida’s seven natural wonders:

You knew the Everglades would score a spot on this list, right? Covering three counties and nearly 2,400 square miles, Everglades National Park comprises America’s only subtropical preserve, and it’s the third-largest national park in the continental U.S. The park is home to a 99-mile Wilderness Waterway that connects Flamingo and Everglades City and is ideal for paddlers and boaters, and it offers opportunities for activities like camping, hiking and biking. Everglades National Park is also a great place to catch of glimpse of wildlife such as alligators, crocodiles, panthers, manatees and more than 350 bird species.

It’s not quite as well-known as the Everglades, but John Pennekamp Coral Reef State Park is one of Florida’s most unique destinations. Established in 1963, the park was the first of its kind in the U.S., and it spans approximately 70 nautical square miles.

The 6 Best-Kept Secret Beaches in Florida

The 46,000-acre Timucuan Ecological and Historic Preserve is one of the last unspoiled coastal wetlands on the Atlantic Coast. Located in Jacksonville, the preserve is named for the Timucua, a native people who lived in the area when Spanish and French explorers arrived in the 1500s. Today more than 75 percent of the preserve is made up of open water and salt marshes, and it lays claim to some of Florida’s most significant historic sites, including the Kingsley Plantation and Fort Caroline National Memorial.

These rare coastal dune lakes are only found in a few other places around the world – Australia, New Zealand and Madagascar – so you should definitely check them out if you’re in Florida. There are 15 named lakes on a 26-mile stretch in South Walton, all formed by winds that redistributed sand and created shallow lakes, which are usually no deeper than five feet and mostly consist of fresh water. Known as the Jewels of Florida’s Emerald Coast, the coastal dune lakes are located on what many consider one of the world’s most beautiful beaches.

Ever explored a 120-foot sinkhole? At Devil’s Millhopper Geological State Park in Gainesville, you can. A 220-step staircase leads visitors down into the bowl-shaped, limestone cavity, which includes a natural rainforest with small waterfalls and lush vegetation. Although no one is quite sure how the destination received its unusual name, there’s one theory that stands out among the rest. The early Gainesville pioneers who found the sinkhole thought its shape resembled the hopper from a grist mill, and because it contained so many fossils, many believed it led to hell. Combine those and you get Devil’s Millhopper.

Why Gainesville, FL is One of the Best Places to Live in the U.S.

The 73-acre Blowing Rocks Preserve, located on Jupiter Island, has the largest exposed section of Antarctica limestone on the East Coast. The preserve is pretty cool no matter when you visit, but it’s most impressive during extreme high tides and after winter storms – the seas break against the rocks, and water shoots as high as 50 feet into the sky. Animal lovers will also appreciate Blowing Rocks Preserve as it is home to creatures like sea turtles, shorebirds and fiddler crab.

Should You Move to Florida? Take Our Quiz to Find Out!

Filled with limestone stalactites, stalagmites, soda straws, flowstones and draperies, Florida Caverns State Park in Marianna is a must-visit. The park is the only destination in the state with air-filled caves open to visitors, and 45-minute guided tours take place Monday-Thursday throughout the year. In addition to touring the caverns, visitors can fish, canoe and boat in the Chipola River and Blue Hole spring, and several miles of trails offer hiking and biking opportunities. Florida Caverns State Park also includes a nine-hole golf course designed by the famous Robert Trent Jones.