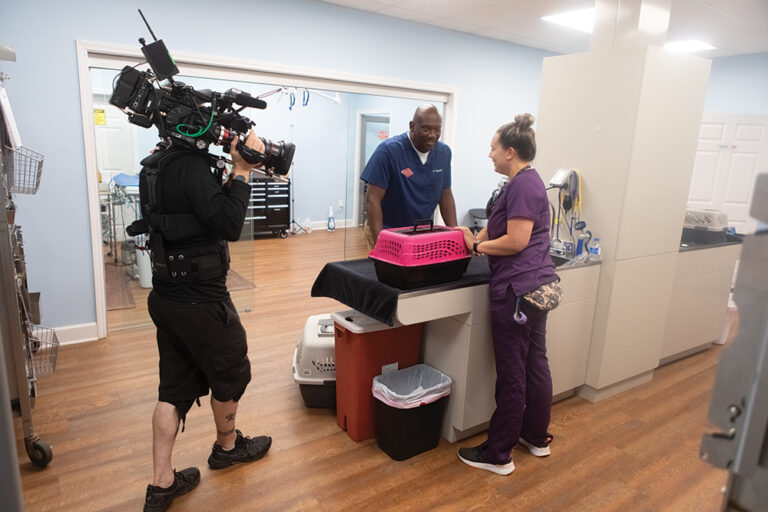 A dog with a rattlesnake bite, alpacas with a deadly parasite and even a fish with a scale disease. That’s all part of the day-to-day for Dr. Vernard Hodges and Dr. Terrence Ferguson, college friends, military vets and Robins Region residents turned veterinarians and the stars behind “Critter Fixers: Country Vets.”

Gearing up for its fourth season, the popular Nat Geo Wild TV program features the two docs as they treat a variety of animal maladies at their clinic, Critter Fixer Veterinary Hospital, located in the Robins Region. Both Hodges and Ferguson grew up in the area. However, they chose to return to the region not just to serve the animals of rural Georgia (and their people) but to be an example to young people of color everywhere that may aspire to be veterinarians.

An added bonus? The popularity of the series has made an economic impact on Bonaire, where Critter Fixers has set up shop. It has created jobs locally but also made the Robins Region a destination for fans of the show, who come from all over to have their pets seen. The show’s promotional value ranges from building sets and hiring a film crew to draw a steady influx of visitors who bring their exotic pets to the vets but also stay in area hotels and dine at local restaurants.

“Dr. Ferguson and I are always surprised at the number of people who travel to us with their pets – from Florida, North and South Carolina and Alabama, as a few examples,” Hodges says. “We’re so humbled by the people who come to see us; we’re so happy to be able to create friendships with clients from all over the country.”

As members of the small community where their practice is centered, Dr. Ferguson and Dr. Hodges have not just made a name for themselves as local celebrities. Still, they continue to be involved with organizations like the Rotary Club, the Chamber of Commerce and others, just as they have been for decades.

“They’re such gracious people, and they’re showing who we are and very wide audience — and they both have a similar heart,” says Marsha Buzzell, executive director of the Warner Robins Convention & Visitors Bureau. “Critter Fixers shows our community the way it is: hospitable. They are taking in people and their pets and caring for them. It’s one thing to be welcoming, but it’s another to really demonstrate caring — that’s what it’s all about — and they are all about community. And people want to come here because of them.”

Critter Fixers says Bonaire was initially chosen mainly because of its logistical setup. However, today, they note that they have grown to almost two dozen people between production and added staff. In addition, many people stop by to visit the clinic without even needing treatment for their pets.

Buzzell shares a story of a family that drove from Houston, Texas, and as a surprise for their 9-year-old son’s birthday, stopped to say hello to the Critter Fixers. To everyone’s surprise, Dr. Hodges stopped what he was doing and came into the waiting room to greet the family, creating an unforgettable memory. Dr. Hodges corroborates that and adds that it happens frequently.

“People just stop by to visit — and we’ve also hosted some of our fellow vets from Disney+, Doctors Erin and Ben Schroeder from ‘Heartland Docs,'” Dr. Hodges says. “It’s important to us that the show highlights the amazing area we live and work in, and I think it’s helped expand awareness of Middle Georgia. We filmed the Cherry Blossom Parade last season and showcased that local event, and we’ll continue to put a spotlight on the area.”

Returning to their Roots

While Critter Fixers could have chosen to have their show anywhere, they both decided to return to their roots in Georgia’s countryside and live in a small town.

“They really do have an impact here,” Buzzell says. “Just because of who they are — they’re funny, they’re humble, they’re compassionate, and we are just so proud to have them as a part of our community.”

You can stream all episodes of Critter Fixers: Country Vets online.