Robins Region: A Well-Connected Place for Play and Parks 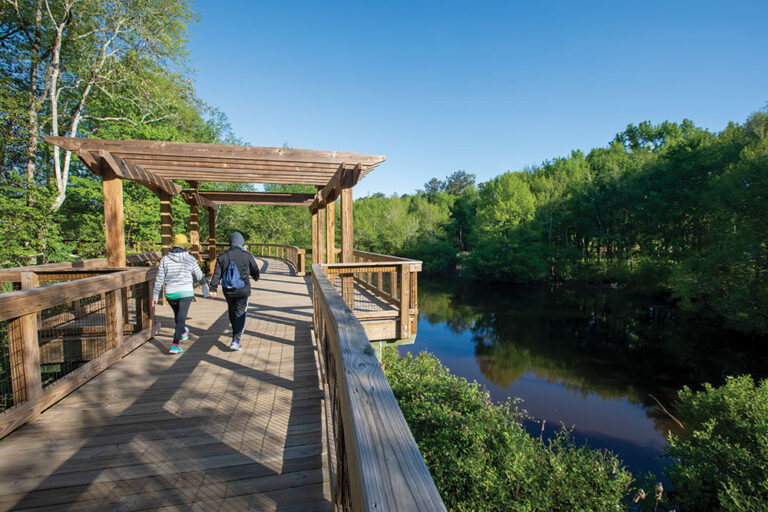 There are no borders or boundaries when it comes to outdoor recreation in the Robins Region.

Instead, the cities throughout the area are working together to create amenities and programs that benefit all the communities.

“We understand the benefits of outdoor recreation in the Robins Region,” says Sedrick Swan, leisure services director for the City of Perry. “We’re working to add to the connectivity of our communities, and walking and biking trails are among the biggest focus areas. Our goal is to eventually connect Perry with Bonaire, Centerville, Warner Robins and all of Houston County through trails and sidewalks.”

Residents of the Robins Region certainly have numerous reasons to want to participate in an outdoors-oriented lifestyle, beginning with the weather. The area averages more than 220 days of sunshine each year, and temperatures rarely drop below 40 degrees. Once outside, there is plenty to do throughout the region. In addition to the ever-growing trail system, the area contains a collection of standout parks and other rec areas, along with golf courses and options for water activities.

In recent years throughout the county, there has been an investment on all sorts of upgrades to the parks, such as the construction of new facilities and renovations of existing ones. The county’s 15 parks provide basketball, softball, volleyball, swimming and tennis venues.

A sparkling new addition to the rec scene is the $18 million North Houston Sports Complex, which opened in 2021. Included within this 67-acre facility is a 77,000-square-foot recreation center with four basketball courts (which can also convert into eight volleyball courts and 12 pickleball courts), an indoor walking track, two fitness areas, an activity room for classes and multiple banquet/conference rooms. Outside, the complex also has four fields for baseball and softball.

“The complex is already having an impact, both for our residents and with people and sports teams coming here from Atlanta, Florida and South Carolina,” says Jarred Reneau, Warner Robins director of recreation. “It’s a testament to how serious people are about making (outdoor recreation) a top priority for our citizens, and also for economic development. When you have both your citizens and economic development in mind, it makes your whole community better.”

Many Ways to Play

Rozar Park in Perry is an example of the variety of outdoor activities that can be enjoyed in the Robins Region. In addition to soccer fields, baseball fields, playgrounds and a basketball court, Rozar Park has an 18-hole disc golf course, two large fishing ponds and a set of three tracks for remote control vehicles that are free to use.

“That’s one of our hidden jewels in Perry,” Swan says of the RC tracks. “It’s just another way to enable people to get outdoors and enjoy the sun and fresh air.”

For those who prefer simply to hike or bike, the Robins Region also has that covered. Rotary Centennial Park in Perry includes a 2.5-mile nature trail network that runs alongside Big Indian Creek; there is a 1.5-mile paved trail at 37-acre Wellston Park in Warner Robins; and the 22-acre Walk at Sandy Run, which opened in 2019, features a boardwalk-style trail next to Sandy Run Creek, along with walking paths through the woods and a covered picnic area.

Water and wildlife enthusiasts are drawn to Houston Lake (where canoers, kayakers and anglers mingle with turtles and cranes) as well as to the Oaky Woods Wildlife Management Area, a 12,750-acre reserve that offers hunting, fishing and primitive camping sites.

Swan says the long-range goal is for most of these recreational sites to connect through the region’s various walking and biking trails.

“Our goal is connectivity,” Swan says. “We want to make it where people can go from their neighborhoods, quickly jump onto a trail – be it paved or natural – and pretty much navigate through the entire region.”